When it comes to extrasolar planets, appearances can be deceiving. Astronomers have imaged a new planet, and it appears nearly identical to one of the best studied gas-giant planets. But this doppelganger differs in one very important way: its origin.

"We have found a gas-giant planet that is a virtual twin of a previously known planet, but it looks like the two objects formed in different ways," said Trent Dupuy, astronomer at the Gemini Observatory and leader of the study.

Emerging from stellar nurseries of gas and dust, stars are born like kittens in a litter, in bunches and inevitably wandering away from their birthplace. These litters comprise stars that vary greatly, ranging from tiny runts incapable of generating their own energy (called brown dwarfs) to massive stars that end their lives with supernova explosions. In the midst of this turmoil, planets form around these new stars. And once the stellar nursery exhausts its gas, the stars (with their planets) leave their birthplace and freely wander the Galaxy. Because of this exodus, astronomers believe there should be planets born at the same time from the same stellar nursery, but are orbiting stars that have moved far away from each other over the eons, like long-lost siblings.

The infrared spectra of 2MASS 0249 c (top) and beta Pictoris b (bottom) are similar, as expected for two objects of comparable mass that formed in the same stellar nursery. Unlike 2MASS 0249 c, beta Pictoris b orbits much closer to its massive host star and is embedded in a bright circumstellar disk. 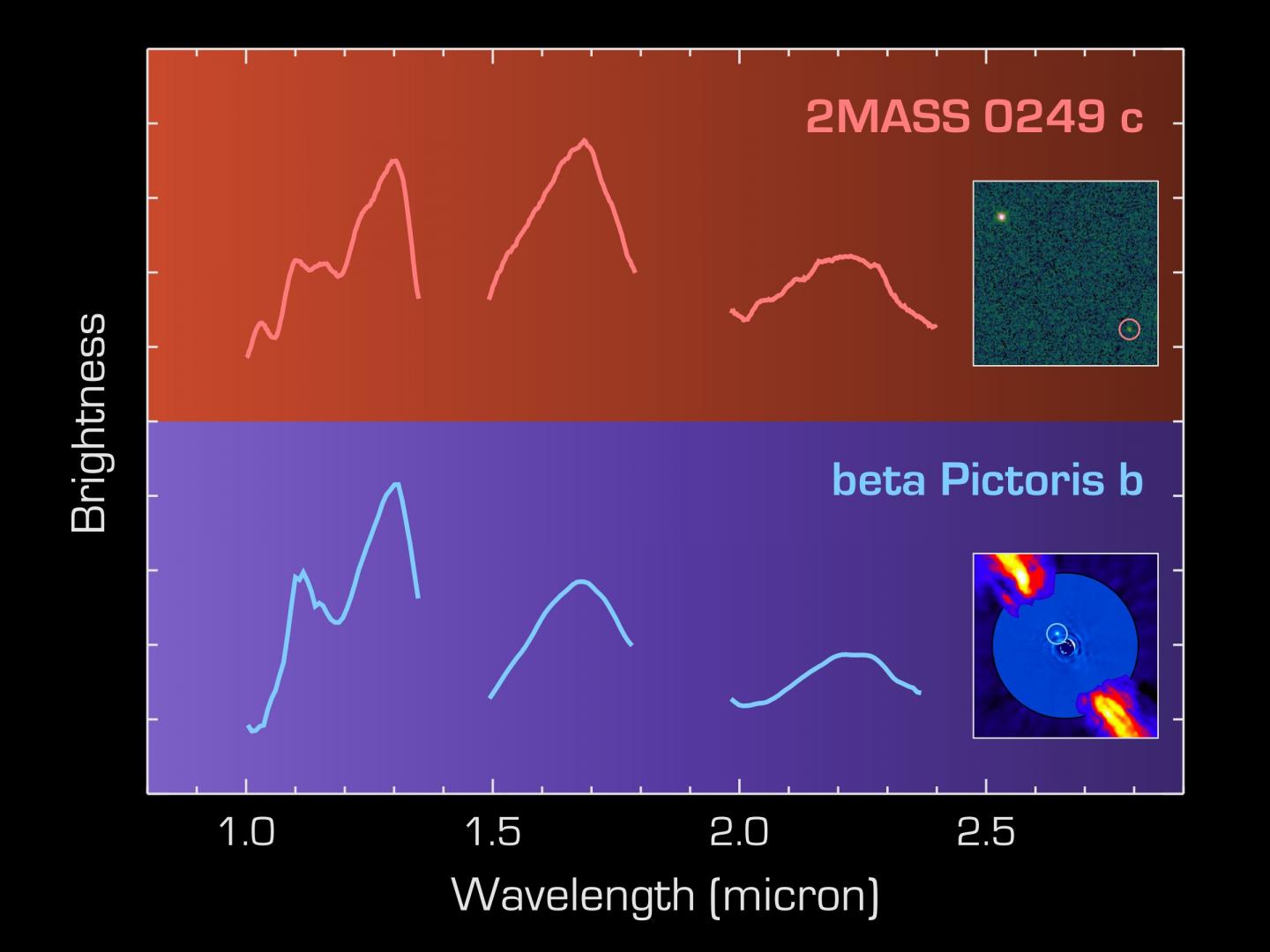 "To date, exoplanets found by direct imaging have basically been individuals, each distinct from the other in their appearance and age. Finding two exoplanets with almost identical appearances and yet having formed so differently opens a new window for understanding these objects," said Michael Liu, astronomer at the University of Hawaii Institute for Astronomy, and a collaborator on this work.

Dupuy, Liu and their collaborators have identified the first case of such a planetary doppelganger. One object has long been known: the 13-Jupiter-mass planet beta Pictoris b, one of the first planets discovered by direct imaging, back in 2009. The new object, dubbed 2MASS 0249 c, has the same mass, brightness, and spectrum as beta Pictoris b.

After discovering this object with the Canada-France-Hawaii Telescope (CFHT), Dupuy and collaborators then determined that 2MASS 0249 c and beta Pictoris b were born in the same stellar nursery. On the surface, this makes the two objects not just look-alikes but genuine siblings.

However, the planets have vastly different living situations, namely the types of stars they orbit. The host for beta Pictoris b is a star 10 times brighter than the Sun, while 2MASS 0249 c orbits a pair of brown dwarfs that are 2000 times fainter than the Sun. Furthermore, beta Pictoris b is relatively close to its host, about 9 astronomical units (AU, the distance from the Earth to the Sun), while 2MASS 0249 c is 2000 AU from its binary host.

These drastically different arrangements suggest that the planets' upbringings were not at all alike. The traditional picture of gas-giant formation, where planets start as small rocky cores around their host star and grow by accumulating gas from the star's disk, likely created beta Pictoris b. In contrast, the host of 2MASS 0249 c did not have enough of a disk to make a gas giant, so the planet likely formed by directly accumulating gas from the original stellar nursery. "2MASS 0249 c and beta Pictoris b show us that nature has more than one way to make very similar looking exoplanets," says Kaitlin Kratter, astronomer at the University of Arizona and a collaborator on this work. "beta Pictoris b probably formed like we think most gas giants do, starting from tiny dust grains. In contrast, 2MASS 0249 c looks like an underweight brown dwarf that formed from the collapse of a gas cloud. They're both considered exoplanets, but 2MASS 0249 c illustrates that such a simple classification can obscure a complicated reality."

The team first identified 2MASS 0249 c using images from CFHT, and their repeated observations revealed this object is orbiting at a large distance from its host. The system belongs to the beta Pictoris moving group, a widely dispersed set of stars named for its famous planet-hosting star. The team's observations at W.M. Keck Observatory determined that the host is actually a closely separated pair of brown dwarfs. So, altogether, the 2MASS 0249 system comprises two brown dwarfs and one gas-giant planet. Follow-up spectroscopy of 2MASS 0249 c with the NASA Infrared Telescope Facility and the Astrophysical Research Consortium 3.5-meter Telescope at Apache Point Observatory demonstrated that it shares a remarkable resemblance to beta Pictoris b.

The 2MASS 0249 system is an appealing target for future studies. Most directly imaged planets are very close to their host stars, inhibiting detailed studies of the planets due to the bright light from the stars. In contrast, the very wide separation of 2MASS 0249 c from its host binary will make measurements of properties like its surface weather and composition much easier, leading to a better understanding of the characteristics and origins of gas-giant planets.

This work has been posted to the ArXiv and is accepted for publication in the Astronomical Journal.

This work has been supported by the National Science Foundation under Grant No. AST-1518339.

Contacts and sources:
Roy Gal
University of Hawaii Institute for Astronomy
on July 18, 2018