"Across the East Coast of the United States, some of the most visible forms for pre-contact Native American material culture can be found in the form of large earthen and shell mounds," said Binghamton University anthropologist Carl Lipo. "Mounds and shell rings contain valuable information about the way in which past people lived in North America. As habitation sites, they can show us the kinds of foods that were eaten, the way in which the community lived, and how the community interacted with neighbors and their local environments.

Four shell ring features identified using the object-based image analysis (OBIA) algorithm. The ring on the top right has been confirmed as a shell ring site. 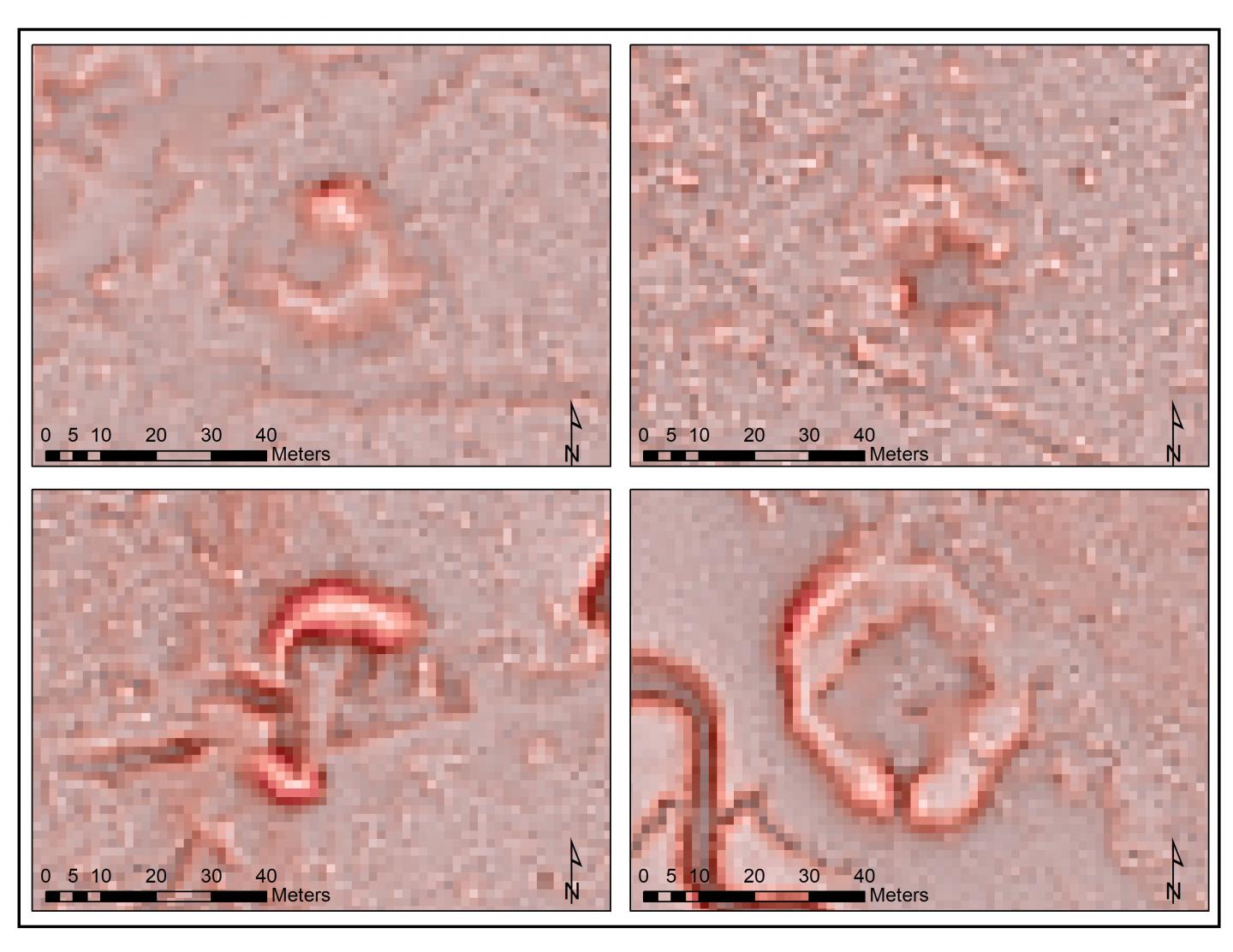 In areas that are deeply wooded or consist of bayous and swamps, there exist mounds that have eluded more than 150 years of archaeological survey and research. Due to vegetation, these kinds of environments make seeing more than a couple of dozen feet difficult, and even large mounds can be hidden from view, even when one systematically walks on the terrain.

The use of satellites and new kinds of aerial sensors such as LiDAR (light detection and ranging) have transformed the way archaeologists can gather data about the archaeological record, said Lipo. Now scientists can study landscapes from images and peer through the forest canopy to look at the ground. LiDAR has been particularly effective at showing the characteristic rises in topography that mark the presence of mounds. The challenge to archaeologists, however, is to manage such a vast array of new data that are available for study.

The team's approach successfully identified ring and mound sites (indicated by arrows) within a stretch of forest that had not been previously surveyed by archaeologists. 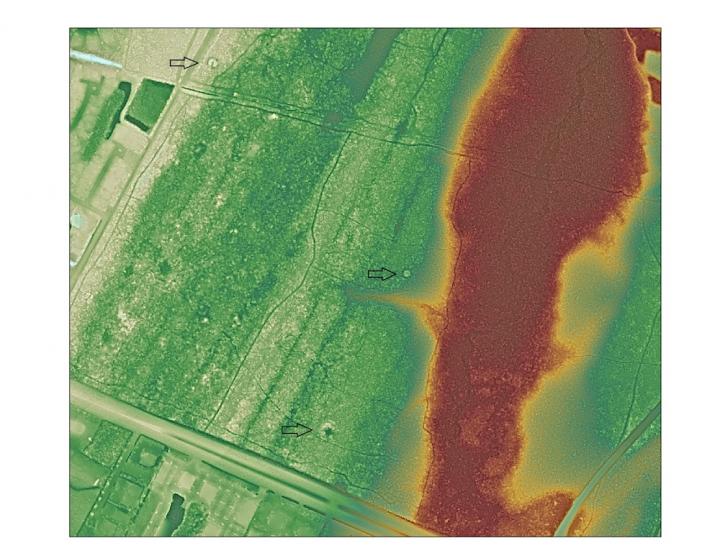 Object based image analysis (OBIA) allows archaeologists to configure a program to automatically detect features of interest. OBIA is a computer-based approach to use data from satellite images and aerial sensors to look for shapes and combinations of features that match objects of interest. Unlike traditional satellite image analyses that looks at combinations of light wavelengths, OBIA adds characteristics of shape to the search algorithm, allowing archaeologists to more easily distinguish cultural from natural phenomena.

Two previously identified shell rings on Daws Island, S.C. These features were also picked up by the new approach utilized by Davis, Sanger, and Lipo (2018). 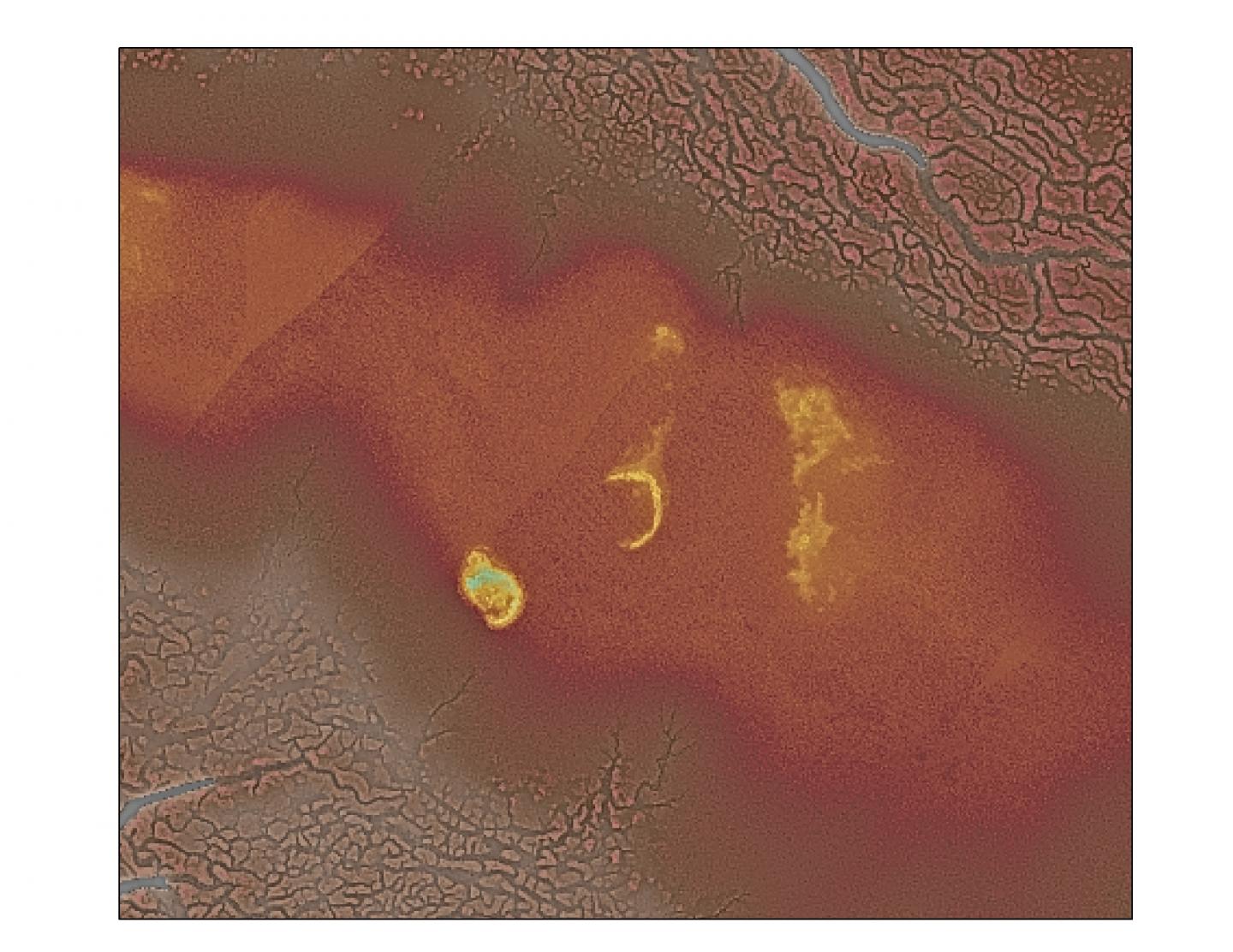 "Through the use of OBIA, archaeologists can now repeatedly generate data about the archaeological record and find historic and pre-contact sites over massive areas that would be cost-prohibitive using pedestrian survey. We can now also peer beneath the dense canopy of trees to see things that are otherwise obscured. In areas like coast South Carolina, with large swaths of shallow bays, inlets and bayous that are covered in forest, OBIA offers us our first look at this hidden landscape."

Having demonstrated the effectiveness for using OBIA in conditions of dense vegetation and after optimizing our processing, Lipo and his team are expanding their efforts to include much-larger areas.

"Fortunately, satellite and LiDAR data are now available for much of the eastern seaboard, so undertaking a large-scale project is now a task that is achievable," said Lipo. "Due to climate change and sea-level rise, many major mounds and middens on the East Coast are threatened by erosion and inundation. It is urgent we document this pre-contact landscape as soon as possible, in order to learn as much as we can about the past before it is gone forever."