The Himalayan Range includes some of the youngest and most spectacular mountains on Earth, but the rugged landscape that lends it the striking beauty for which it is known can also keep scientists from fully understanding how these mountains formed. "We know more about the rocks on parts of Mars than we do about some of the areas in the Himalaya," said Dr. Alka Tripathy-Lang.

"Many researchers have done extraordinary geologic mapping in this rugged region, but the fact is that some places are just completely inaccessible because of topography, elevation, or geopolitical issues. The rocks in those areas are an important piece of the tectonic puzzle and are important for understanding the way the region evolved," said Dr. Wendy Bohon. "The tools we used, originally developed for mapping rocks on Mars, were a way to safely access information about the rocks in the Himalayas."

This is a temple in the Nubra Valley of Ladakh, India, which is in the study area. The picture illustrates the enormous size and scale of the mountains in this part of the Himalayas. 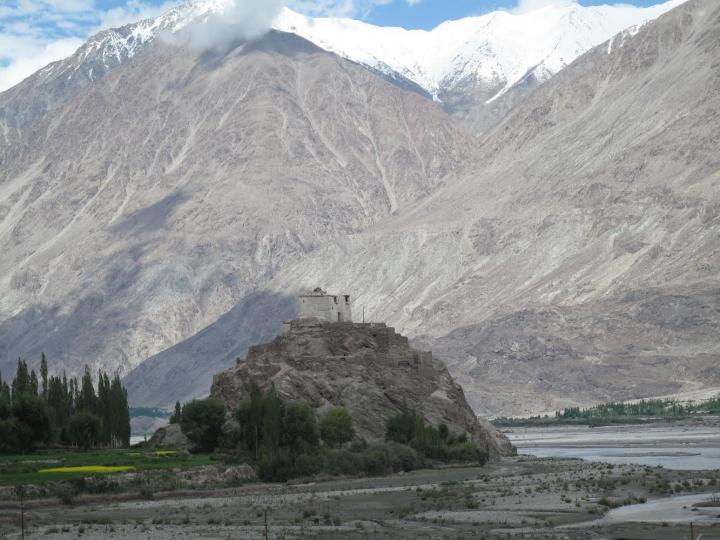 The researchers relied on the fact that every mineral has a unique spectral "signature," where some parts of the thermal infrared spectrum are absorbed and some parts are reflected. Rocks are made of different combinations of minerals, so when all of these mineral signatures are combined, they reveal the rock type. To easily distinguish between different kinds of rocks the researchers translated these signals into red/green/blue imagery, which results in a distinguishable color for each rock type that can be used to map the distribution of rocks throughout the region.

Top: Map made using ASTER satellite data imagery. Bottom: one "stretch" - or one color combination - of the ASTER data that was used to make the map. To double-check that the colors they're mapping are truly the rock type predicted by the imagery, the researchers took hand samples from accessible locations in the study area to the laboratory and measured the spectral signatures of each rock using a thermal emission spectrometer. Then they compared these laboratory signatures to those collected from the ASTER (Advanced Spaceborne Thermal Emission and Reflection Radiometer) instrument on the Terra satellite. They matched. "There is some variation between the lab and ASTER spectral signatures due to different factors like weathering and the averaging area, but overall the match between them was surprisingly consistent," said Tripathy-Lang.

The map they created revealed some interesting geology. They were able to clearly see "suture zones" -- ancient seafloor pushed up and exposed during the collision between India and Eurasia -- as well as subtle differences in the granitic mountains that indicates different phases of formation. They were also able the see the intersection of two massive fault systems, the Karakoram and Longmu Co Faults. "These fault systems are hugely important to the story of the Himalayan-Tibetan collision, and determining the way that these systems have evolved and how they interact is critical for understanding this part of the Himalayan Mountains," said Bohon.