The Ancestor of All Modern Birds Was a Ground Dweller

New research shows that global mass deforestation caused by the asteroid that wiped out the dinosaurs led to the extinction of all the ancient tree-dwelling birds. The study, led by the Milner Centre for Evolution, suggests all modern tree-dwelling birds evolved from a partridge-like common ancestor that lived on the ground.

The new study says all modern birds evolved from the same ground-dwelling, common ancestor, after an asteroid slammed into Earth millions of years ago and devastated the planet’s forests.

“Everyone knows an asteroid the size of Manhattan caused a mass extinction 66 million years ago. The composition and distribution of life on Earth today cannot be understood except in light of this cataclysm,” said Yale professor of geology and geophysics Jacques Gauthier, co-author of a study published May 24 in Current Biology. Gauthier is curator of vertebrate paleontology and vertebrate zoology at the Yale Peabody Museum of Natural History.

An artist’s rendering of a bird fleeing from a burning forest after the asteroid strike that wiped out non avian dinosaurs. 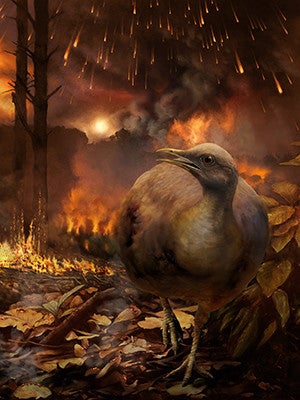 An international team of researchers from the U.S., England, and Sweden pieced together evidence from the plant fossil record and ecology of ancient and modern birds, in order to conduct the study. The lead author is Daniel Field, of the Milner Centre for Evolution at the University of Bath.
Gauthier said the study’s hypothesis explains the disappearance of the common tree-dwelling birds of the Cretaceous period. “It also explains the fact that although many birds live in trees today, their earliest relatives emerging from the wake of the asteroid impact were long-legged ground dwellers,” he said.

The international team of UK, US, and Swedish researchers, publishing in the journal Current Biology, pieced together evidence from the plant fossil record and ecology of ancient and modern birds, and found that the only birds to survive the Cretaceous-Paleogene (K–Pg) mass extinction event lived on the ground.

“We drew on a variety of approaches to stitch this story together,” said lead author Dr Daniel Field, Prize Fellow at the Milner Centre for Evolution.

“We concluded that the devastation of forests in the aftermath of the asteroid impact explains why tree-dwelling birds failed to survive across this extinction event. The ancestors of modern tree-dwelling birds did not move into the trees until forests had recovered from the extinction-causing asteroid.”

Paleobotanist Dr Antoine Bercovici from Smithsonian Institution analysed the plant fossil record before and after the K-Pg boundary.

He said: “Our study examined the fossil record from New Zealand, Japan, Europe and North America which showed there was a mass deforestation across the globe at the K-Pg boundary. This was followed by a mass colonisation of so-called ‘disaster plants’, such as ferns, whose spores were able to survive the asteroid hit and germinate rapidly to fill the habitats left empty by the extinction of the trees.

“The recovery of canopy-forming trees such as palms and pines happened much later, which coincides with the evolution and explosion of diversity of tree-dwelling birds.”

The researchers found that once the forests had recovered, birds began to adapt to living in trees, acquiring shorter legs than their ground-dwelling ancestors and various specialisations for perching on branches.

“Only a handful of ancestral bird lineages succeeded in surviving the K–Pg mass extinction event 66-million-years-ago, and all of today’s amazing living bird diversity can be traced to these ancient survivors.

“We are working hard to shed new light on this murky portion of the fossil record, which promises to tell us a lot about how birds and other animal groups survived - then thrived -following the extinction of T. rex and Triceratops.”