Biologists have programmed cells to self-organize into 3D-structures in a first step towards tissues that regrow and self-repair.

How do complex biological structures — an eye, a hand, a brain — emerge from a single fertilized egg? This is the fundamental question of developmental biology, and a mystery still being grappled with by scientists who hope to one day apply the same principles to heal damaged tissues or regrow ailing organs.

Now, in a study published May 31, 2018 in Science, researchers have demonstrated the ability to program groups of individual cells to self-organize into multi-layered structures reminiscent of simple organisms or the first stages of embryonic development.

Researchers programmed cells to self-assemble into complex structures such as this one with three differently colored layers. 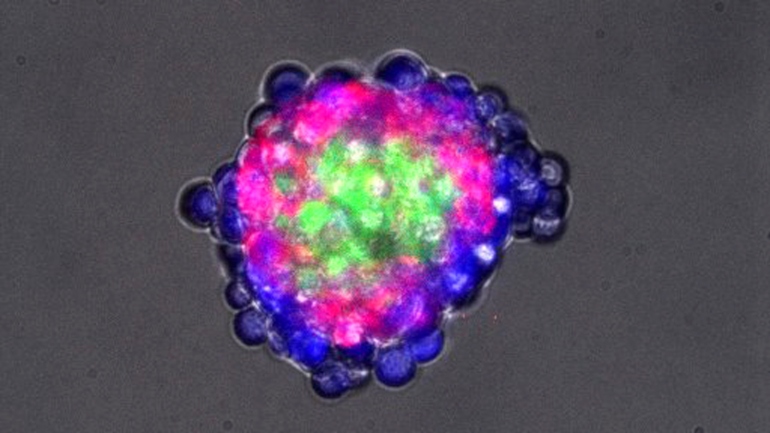 
“What is amazing about biology is that DNA allows all the instructions required to build an elephant to be packed within a tiny embryo,” said study senior author Wendell Lim, PhD, chair and Byers Distinguished Professor in the Department of Cellular and Molecular Pharmacology at UCSF, director of the NIH-funded Center for Systems and Synthetic Biology, and co-director of the National Science Foundation–funded Center for Cellular Construction. “DNA encodes an algorithm for growing the organism — a series of instructions that unfolds in time in a way we still don’t really understand. It’s easy to get overwhelmed by the complexity of natural systems, so here we set out to understand the minimal set of rules for programming cells to self-assemble into multicellular structures.”

A critical part of development is that, as biological structures form, cells communicate with one another and make coordinated, collective decisions about how to structurally organize themselves. To mimic this process, the new research — led by UCSF postdoctoral researcher Satoshi Toda, PhD, in Lim’s lab — relied on a powerfully customizable synthetic signaling molecule called synNotch (for “synthetic Notch receptor”) recently developed in Lim’s lab, which allowed the researchers to program cells to respond to specific cell–cell communication signals with bespoke genetic programs.

For example, using synNotch, the researchers engineered cells to respond to specific signals from neighboring cells by producing Velcro-like adhesion molecules called cadherins as well as fluorescent marker proteins. Remarkably, just a few simple forms of collective cell communication were sufficient to cause ensembles of cells to change color and self-organize into multi-layered structures akin to simple organisms or developing tissues.

In their simplest experiment of this sort, the researchers programmed two groups of cells to self-organize into a two-layered sphere. They started with one group of blue cells expressing a signaling protein on their surfaces, and a second group of colorless cells sporting a custom synNotch receptor programmed to detect this signal protein. When isolated from one another, these cell populations did nothing, but when the two groups were mixed, the blue cells activated the synNotch receptors on the clear cells and triggered them to produce sticky cadherins and a green marker protein called GFP. As a result, the colorless cells quickly began to turn green and cluster together, forming a central core surrounded by an outer layer of their partner blue cells.

The researchers went on to program groups of cells to self-assemble in increasingly complex ways, such as building three-layered spheres or starting with a single group of cells that sorted themselves into two distinct groups before forming a layered sphere. They even engineered cells that formed the beginnings of “polarity” — the distinct front–back, left–right, head–toe axes that define the “body plans” of many multicellular organisms — by expressing different types of cadherin adhesion molecules that instructed the cellular assemblages to divide into “head” and “tail” sections or to produce four distinct radial “arms.”

These more complex cellular programming feats demonstrated that simple starter cells could be programmed to develop over time to form more complex structures, much like a single fertilized egg divides and differentiates to form different parts of the body and distinct tissues like skin, muscle, nerve, and bone. Lim’s team showed that these complex spheroids were also self-repairing: when the researchers cut the multi-layered spheroids in half with a micro-guillotine developed by co-authors Lucas R. Blauch and Sindy Tang, PhD, of Stanford University, the remaining cells quickly re-formed and reorganized themselves according to their intrinsic program.

In the future, Lim imagines programming ever more complex tissue-like cellular structures through multiple layers of synNotch signaling. For example, activation of one synNotch receptor by cell–cell contact or chemical signaling could trigger cells to produce additional distinct synNotch receptors, leading to a cascade of engineered signaling steps. In this way, Lim envisions programming the self-organization of the elaborate structures that would eventually be needed for growing tissues for wound repair or transplant.

“People talk about 3D-printing organs, but that is really quite different from how biology builds tissues. Imagine if you had to build a human by meticulously placing every cell just where it needs to be and gluing it in place,” said Lim, who is a Howard Hughes Medical Institute investigator and member of the UCSF Helen Diller Family Comprehensive Cancer Center. “It’s equally hard to imagine how you would print a complete organ, then make sure it was hooked up properly to the bloodstream and the rest of the body. The beauty of self-organizing systems is that they are autonomous and compactly encoded. You put in one or a few cells, and they grow and organize, taking care of the microscopic details themselves.”

Lim says he hopes his lab’s work will help guide scientists towards being able to program stem cells to repair damaged tissue, or even build new organs that grow with the right connections to the rest of the body.

“Wouldn’t it be great,” Lim said, “if we could grow a new organ directly in the body so that it specifically grows connected to the right places, where it’s supposed to be?”

The research was supported by the US National institutes of Health (K99 1K99EB021030, 5P50GM081879, T32GM008412), the National Science Foundation–funded Center for Cellular Construction at UCSF (DBI-1548297), the US Defense Advanced Research Projects Administration (DARPA) Engineered Living Materials program, the Howard Hughes Medical Institute, the Japan Society for the Promotion of Science (JSPS), the Human Frontiers of Science Program (HFSP), and the European Molecular Biology Organization (EMBO).