For decades, astronomers have puzzled over the exact source of a peculiar type of faint microwave light emanating from a number of regions across the Milky Way. Known as anomalous microwave emission (AME), this light comes from energy released by rapidly spinning nanoparticles - bits of matter so small that they defy detection by ordinary microscopes. (The period on an average printed page is approximately 500,000 nanometers across.)

"Though we know that some type of particle is responsible for this microwave light, its precise source has been a puzzle since it was first detected nearly 20 years ago," said Jane Greaves, an astronomer at Cardiff University in Wales and lead author on a paper announcing this result in Nature Astronomy.

This is an artist impression of nanoscale diamonds surrounding a young star in the Milky Way. Recent GBT and ATCA observations have identified the telltale radio signal of diamond dust around 3 such stars, suggesting they are a source of the so-called anomalous microwave emission. 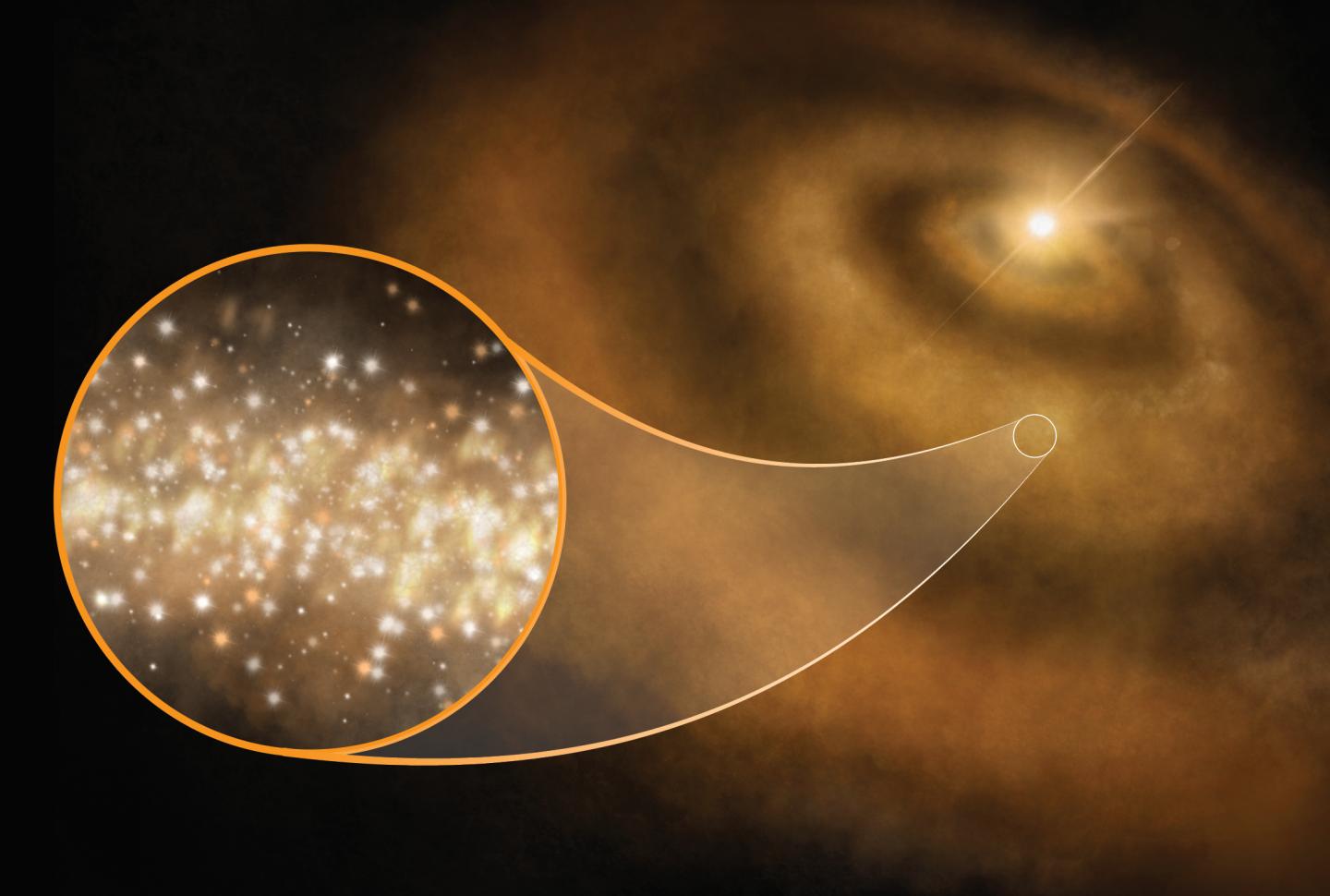 Until now, the most likely culprit for this microwave emission was thought to be a class of organic molecules known as polycyclic aromatic hydrocarbons (PAHs) - carbon-based molecules found throughout interstellar space and recognized by the distinct, yet faint infrared (IR) light they emit. Nanodiamonds -- particularly hydrogenated nanodiamonds, those bristling with hydrogen-bearing molecules on their surfaces -- also naturally emit in the infrared portion of the spectrum, but at a different wavelength.

A series of observations with the National Science Foundation's Green Bank Telescope (GBT) in West Virginia and the Australia Telescope Compact Array (ATCA) has -- for the first time -- homed in on three clear sources of AME light, the protoplanetary disks surrounding the young stars known as V892 Tau, HD 97048, and MWC 297. The GBT observed V892 Tau and the ATCA observed the other two systems.

"This is the first clear detection of anomalous microwave emission coming from protoplanetary disks," said David Frayer a coauthor on the paper and astronomer with the Green Bank Observatory.

The astronomers also note that the infrared light coming from these systems matches the unique signature of nanodiamonds. Other protoplanetary disks throughout the Milky Way, however, have the clear infrared signature of PAHs yet show no signs of the AME light.

This strongly suggests that PAHs are not the mysterious source of anomalous microwave radiation, as astronomers once thought. Rather, hydrogenated nanodiamonds, which form naturally within protoplanetary disks and are found in meteorites on Earth, are the most likely source of AME light in our galaxy.

"In a Sherlock Holmes-like method of eliminating all other causes, we can confidently say the best candidate capable of producing this microwave glow is the presence of nanodiamonds around these newly formed stars," said Greaves. Based on their observations, the astronomers estimate that up to 1-2 percent of the total carbon in these protoplanetary disks has gone into forming nanodiamonds.

Evidence for nanodiamonds in protoplanetary disks has grown over the past several decades. This is, however, the first clear connection between nanodiamonds and AME in any setting.

Statistical models also strongly support the premise that nanodiamonds are abundant around infant stars and are responsible for the anomalous microwave emission found there. "There is a one in 10,000 chance, or less, that this connection is due to chance," said Frayer.

For their research, the astronomers used the GBT and ATCA to survey 14 young stars across the Milky Way for hints of anomalous microwave emission. AME was clearly seen in 3 of the 14 stars, which are also the only 3 stars of the 14 that show the IR spectral signature of hydrogenated nanodiamonds. "In fact, these are so rare," notes Greaves, "no other young stars have the confirmed infrared imprint."

This detection has interesting implications for the study of cosmology and the search for evidence that our universe began with a period of inflation. If immediately after the Big Bang, our universe grew at a pace that vastly outstripped the speed of light, a trace of that period of inflation should be seen in a peculiar polarization of the cosmic microwave background. Though this signature of polarization has yet to be conclusively detected, the work by Greaves and her colleagues offers some hope that it could be.

"This is good news for those who study polarization of the cosmic microwave background, since the signal from spinning nanodiamonds would be weakly polarized at best," said Brian Mason, an astronomer at the National Radio Astronomy Observatory and coauthor on the paper. "This means that astronomers can now make better models of the foreground microwave light from our galaxy, which must be removed to study the distant afterglow of the Big Bang."

Nanodiamonds likely form out of a superheated vapor of carbon atoms in highly energized star-forming regions. This is not unlike industrial methods of creating nanodiamonds on Earth.

In astronomy, nanodiamonds are special in that their structure produces what is known as a "dipole moment" - an arrangement of atoms that allows them to emit electromagnetic radiation when they spin. Because these particles are so small - smaller than normal dust particles in a protoplanetary disk -- they are able to spin exceptionally fast, emitting radiation in the microwave range rather than in the meter-wavelength range, where galactic and intergalactic radiation would probably drown it out.

"This is a cool and unexpected resolution to the puzzle of anomalous microwave radiation," concluded Greaves. "It's even more interesting that it was obtained by looking at protoplanetary disks, shedding light on the chemical features of early solar systems, including our own."

"It is an exciting result," concluded co-author Anna Scaife from Manchester University. "It's not often you find yourself putting new words to famous tunes, but 'AME in the Sky with Diamonds' seems a thoughtful way of summarizing our research."

Future centimeter-wave instruments, like the planned Band 1 receivers on ALMA and the Next Generation Very Large Array, will be able to study this phenomenon in much greater detail. Now that there is a physical model and, for the first time, a clear spectral signature, astronomers expect our understanding will improve quickly.

Green Bank Observatory is a facility of the National Science Foundation and is operated by Associated Universities, Inc.