Something Big Is Happening Under the Antarctic Ice Sheet

An international team led by DTU Space at the Technical University of Denmark with Colorado State University has found that the bedrock below the remote West Antarctic Ice Sheet is rising much more rapidly than previously thought, in response to ongoing ice melt.

The study, “Observed rapid bedrock uplift in the Amundsen Sea Embayment promotes ice-sheet stability,” reveals new insights on the geology of the region and its interaction with the ice sheet and is published in the journal Science.

Researchers said the findings have important implications in understanding and predicting the stability of the ice sheet and Earth’s rising sea levels.

Antarctica, as seen using Google Earth, and a cut to show the interior of the earth, where the mantle (red and dark red) and the core (yellow) are visible. The Amundsen Sea Embayment is indicated by the red rectangle. On the right, a photo reveals one of the GPS sites in the study.

“We studied a surprising and important mechanism, glacial isostatic adjustment, that may slow the demise of the massive West Antarctic Ice Sheet by lifting up the bedrock and sediments beneath the ice sheet,” explained CSU Professor Rick Aster, a co-author of the study and head of the Geosciences department at the university.

Scientists have been concerned that this ice sheet is particularly precarious in the face of a warming climate and ocean currents, because it is grounded hundreds to thousands of feet below sea level — unlike the ice sheets of East Antarctica or Greenland — and its base slopes inland. This bowl-like topography makes it susceptible to runaway destabilization and even complete collapse over centuries or even thousands of years.

The entirety of West Antarctica contains enough ice that, if it were to melt, would contribute more than 10 feet of average global sea level rise. In addition, the ice sheet is so massive that it attracts an ocean bulge, due to gravity. If this mass of water is released, it would lead to an additional increase of three feet or more to average sea level in parts of the Northern Hemisphere.

The West Antarctic Ice Sheet is currently contributing approximately 25 percent of global melting land-based ice each year, and recent satellite-based studies have shown that this amount has increased in recent decades. This figure is equivalent to about 37 cubic miles or a cube of over three miles on each side.

Co-authors of the study based at The Ohio State University led the installation of sensitive GPS stations on rock outcrops around the remote region to measure the rise in response to thinning ice and to directly measure the uplift due to changes in the ice sheet. These measurements showed that the bedrock uplift rates were as high as 1.6 inches per year, one of the fastest rates ever recorded in glacial areas.

Professor Rick Aster is a co-author of a new study that analyzed the remote West Antarctic Ice Sheet, which is susceptible to collapse. 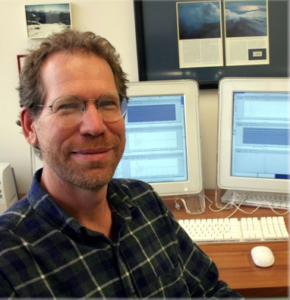 Researchers also found in this study that the uplift is accelerating, and predicted that it will continue to do so into the next century.

“Our research indicates that recent and ongoing ice loss in the region has been underestimated by approximately 10 percent in past studies, because this bedrock uplift was inadequately accounted for in satellite measurements,” said Aster.

Lead author Valentina Barletta, a postdoctoral researcher at DTU SPACE, Technical University of Denmark, said that this uplift is occurring quite rapidly, when compared with other regions of the earth where glaciers are melting.

“Normally we would see this type of uplift happening slowly, over thousands of years after an ice age,” said Barletta. “What we found tells us that earth’s underlying viscous mantle is relatively fluid and moves quickly when the weight of the ice is taken off,” she added.

Terry Wilson, professor emeritus of Earth Sciences at The Ohio State University, said the findings suggest that the geological conditions beneath the ice are very different from what scientists had previously believed.

“The rate of uplift we found is unusual and very surprising,” she said. “It’s a game changer.”

Aster, Barletta and the study co-authors have deployed a large network of sensitive seismographs across Antarctica to produce seismic tomographic images — analogous to a gigantic CAT scan — of the deep earth below Antarctica.

The work assisted in the interpretation and modeling of the GPS uplift data by delineating a vast region of the earth’s mantle, 40 to 400 miles below West Antarctica, that is relatively hot and fluid.

Previous and related studies conducted by the research team have also revealed that some hotter features below Antarctica extend still deeper, over 600 miles, into the earth.

“These warmer mantle features drive the previously enigmatic volcanic activity in West Antarctica, including Mount Erebus on Ross Island,” said Aster. “This geothermal heat at the base of the ice sheet helps to sustain subglacial lakes in some regions and lubricates the ice sheet as it slips towards the ocean,”he added.

Aster said while the research does provide room for a positive outcome, if future global warming is extreme, the entire West Antarctic Ice Sheet will still melt.

“To keep global sea levels from rising more than a few feet during this century and beyond, we must still limit greenhouse gas concentrations in the atmosphere through international cooperation and innovation,” he said.

The Department of Geosciences is part of the Warner College of Natural Resources.