Commonly abbreviated as GRBs, gamma-ray bursts are narrow beams of electromagnetic waves of the shortest wavelengths in the electromagnetic spectrum. GRBs are the universe’s most powerful electromagnetic events, occurring billions of light years from Earth and able to release as much energy in a few seconds as the sun will in its lifetime. 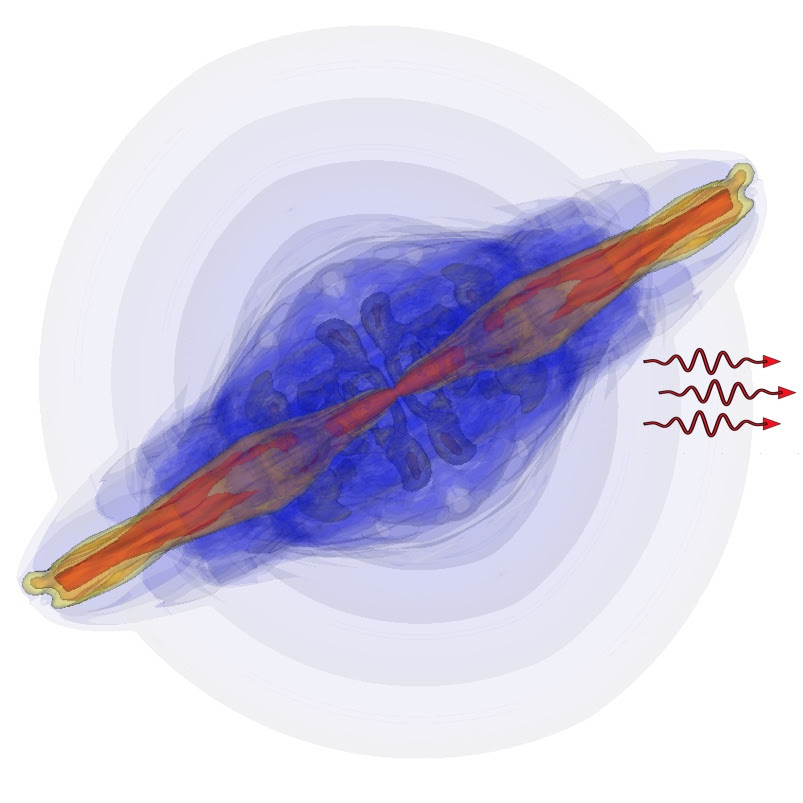 GRBs fall into two categories, long duration and short duration. Long GRBs are associated with the death of a massive star as its core becomes a black hole and can last from a couple of seconds to several minutes.

Short GRBs had been suspected to originate from the merger of two neutron stars, which also results in a new black hole – a place where the pull of gravity from super-dense matter is so strong that not even light can escape. Up to 2 seconds is the time frame of a short GRB.

The term neutron star refers to the gravitationally collapsed core of a large star; neutron stars are the smallest, densest stars known. According to NASA, neutron stars’ matter is packed so tightly that a sugar-cube-sized amount of it weighs in excess of a billion tons.

In November 2017, scientists from U.S. and European collaborations announced they had detected an X-ray/gamma-ray flash that coincided with a blast of gravitational waves, followed by visible light from a new cosmic explosion called a kilonova.

Gravitational waves, a ripple in the fabric of time-space, were first detected in September 2015, a red-letter event in physics and astronomy that confirmed one of the main predictions of Albert Einstein’s 1915 general theory of relativity.

“A simultaneous detection of gamma rays and gravitational waves from the same place in the sky was a major milestone in our understanding of the universe,” said Davide Lazzati, a theoretical astrophysicist in the OSU College of Science. “The gamma rays allowed for a precise localization of where the gravitational waves were coming from, and the combined information from gravitational and electromagnetic radiation allows scientists to probe the binary neutron star system that’s responsible in unprecedented ways.”

Prior to Lazzati’s latest research, however, it had been an open question as to whether the detected electromagnetic waves were “a short gamma-ray burst, or just a short burst of gamma rays” – the latter being a different, weaker phenomenon.

In summer 2017, Lazzati’s team of theorists had published a paper predicting that, contrary to earlier estimates by the astrophysics community, short gamma-ray bursts associated with the gravitational emission of binary neutron star coalescence could be observed even if the gamma-ray burst was not pointing directly at Earth.

“X- and gamma rays are collimated, like the light of a lighthouse, and can be easily detected only if the beam points toward Earth,” Lazzati said. “Gravitational waves, on the other hand, are almost isotropic and can always be detected.”

Isotropic refers to being evenly transmitted in all directions.

“We argued that the interaction of the short gamma-ray burst jet with its surroundings creates a secondary source of emission called the cocoon,” Lazzati said. “The cocoon is much weaker than the main beam and is undetectable if the main beam points toward our instruments. However, it could be detected for nearby bursts whose beam points away from us.”

“More radiation came after the burst of gamma rays: radio waves and X-rays,” Lazzati said. “It was different from the typical short GRB afterglow. Usually there’s a short burst, a bright pulse, bright X-ray radiation, then it decays with time. This one had a weak gamma-ray pulse, and the afterglow was faint, brightened very quickly, kept brightening, then turned off.”

“But that behavior is expected when you’re seeing it from an off-axis observation point, when you’re not staring down the barrel of the jet,” he said. “The observation is exactly the behavior we predicted. We haven’t seen the murder weapon, we don’t have a confession, but the circumstantial evidence is overwhelming. This is doing exactly what we expected an off-axis jet would do and is convincing proof that binary neutron star mergers and short gamma-ray bursts are indeed related to each other.”