Rats were carried on ships as humans settled the remote islands of the Pacific - analysis of the rats’ remains reveals changes humans made to the island ecosystems.

Chemical analysis of the remains of rats from archaeological sites spanning the last 2000 years on three Polynesian island systems has shown the impact that humans have had on local environments. The analysis by an international team of scientists allowed the researchers to reconstruct the rats’ diets – and through them the changes made by humans to local ecosystems, including native species extinctions and changes to food webs and soil nutrients. The Earth has arguably entered a new geological epoch called the Anthropocene, an era in which humans are bringing about significant, lasting change to the planet. While most geologists and ecologists place the origins of this era in the last 50 to 300 years, many archaeologists have argued that far-reaching human impacts on geology, biodiversity, and climate extend back millennia into the past.

Ancient human impacts are often difficult to identify and measure compared to those happening today or in recent history. A new study published in the Proceedings of the National Academy of Sciences by researchers at the Max Planck Institute for the Science of Human History in Jena and the University of California, Berkeley advances a new method for detecting and quantifying human transformations of local ecosystems in the past. Using state of the art methods, researchers searched for clues about past human modifications of island ecosystems from an unusual source – the bones of long-dead rats recovered from archaeological sites. One of the most ambitious and widespread migrations in human history began c. 3000 years ago, as people began voyaging across the Pacific Ocean—beyond the visible horizon—in search of new islands. By around 1000 years ago, people had reached even the most remote shores in the Pacific, including the boundaries of the Polynesian region: the islands of Hawai‘i, Rapa Nui (Easter Island) and Aotearoa (New Zealand). Not knowing what they would encounter in these new lands, early voyagers brought with them a range of familiar plants and animals, including crops such as taro, breadfruit, and yams, and animals including the pig, dog, and chicken. Amongst the new arrivals was also the Pacific rat (Rattus exulans), which was carried to almost every Polynesian island on these early voyages, perhaps intentionally as food, or equally likely, as a hidden “stowaway” aboard long-distance voyaging canoes.

The arrival of the rat had profound impacts on island ecosystems. Pacific rats hunted local seabirds and ate the seeds of endemic tree species. Importantly, commensal animals like the Pacific rat occupy a unique position in human ecosystems. Like domestic animals, they spend most of their time in and around human settlements, surviving on food resources produced or accumulated by people. However, unlike their domestic counterparts, these commensal species are not directly managed by people. Their diets thus provide insights into the food available in human settlements as well as changes to island ecosystems more broadly. But how to reconstruct the diet of ancient rats? To do this, the researchers examined the biochemical composition of rat bones recovered from archaeological sites across three Polynesian island systems. Carbon isotope analysis of proteins preserved in archaeological bone indicates the types of plants consumed, while nitrogen isotopes point to the position of the animal in a food web. Nitrogen isotopes are also sensitive to humidity, soil quality, and land use. This study examined the carbon and nitrogen isotopes of archaeological Pacific rat remains across seven islands in the Pacific, spanning roughly 2000 years of human occupation. The researchers’ results demonstrate the impacts of processes like human forest clearance, hunting of native avifauna (in particular land birds and seabirds) and the development of new, agricultural landscapes on food webs and resource availability.

A near-universal pattern of changing rat bone nitrogen isotope values through time was linked to native species extinctions and changes in soil nutrient cycling after people arrived on the islands. In addition, significant changes in both carbon and nitrogen isotopes correspond with agricultural expansion, human site activity, and subsistence choices. “We have many strong lines of archaeological evidence for humans modifying past ecosystems as far back as the Late Pleistocene,” says lead author Jillian Swift, of the Max Planck Institute for the Science of Human History. “The challenge is in finding datasets that can quantify these changes in ways that allow us to compare archaeological and modern datasets to help predict what impacts human modifications will have on ecosystems in the future.”

Prof. Patrick V. Kirch of the University of California, Berkeley, who supervised the study and led excavations on Tikopia and Mangareva, remarked that “the new isotopic methods allow us to quantify the ways in which human actions have fundamentally changed island ecosystems. I hardly dreamed this might be possible back in the 1970s when I excavated the sites on Tikopia Island.”

View of Tikopia Island with its crater lake, from the peak of Mt. Reani. 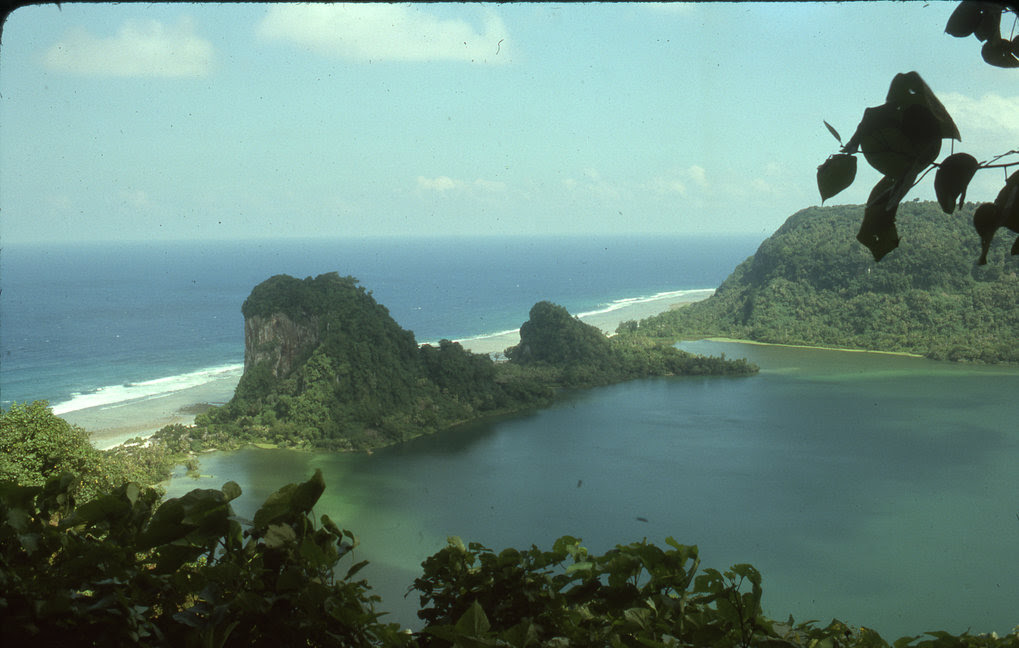 “Commensal species, such as the Pacific rat, are often forgotten about in archaeological assemblages. Although they are seen as less glamorous ‘stowaways’ when compared to domesticated animals, they offer an unparalleled opportunity to look at the new ecologies and landscapes created by our species as it expanded across the face of the planet,” added Patrick Roberts of the Max Planck Institute for the Science of Human History, a co-author on the paper. “The development and use of stable isotope analysis of commensal species raises the possibility of tracking the process of human environment modification, not just in the Pacific, but around the world where they are found in association with human land use.”

The study highlights the extraordinary degree to which people in the past were able to modify ecosystems. “Studies like this clearly highlight the human capacity for ‘ecosystem engineering,’” notes Nicole Boivin, coauthor of the study and Director of the Department of Archaeology at the Max Planck Institute for the Science of Human History. “We clearly have long had the capability as a species of massively transforming the world around us. What’s new today is our ability to understand, measure, and alleviate these impacts.”

Email ThisBlogThis!Share to TwitterShare to FacebookShare to Pinterest
Labels: Archaeology6