A new analysis of data from NASA’s Dawn mission suggests that organic matter may exist in surprisingly high concentrations on the dwarf planet’s surface. 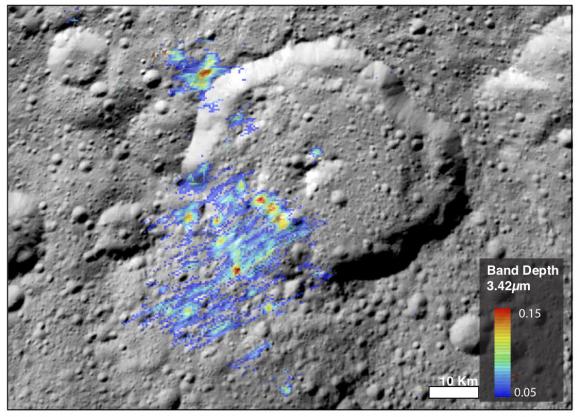 Last year, scientists with NASA's Dawn mission announced the detection of organic material — carbon-based compounds that are necessary components for life — exposed in patches on the surface of the dwarf planet Ceres. Now, a new analysis of the Dawn data by Brown University researchers suggests those patches may contain a much higher abundance of organics than originally thought.

The findings, published recently in Geophysical Research Letters, raise intriguing questions about how those organics got to the surface of Ceres, and the methods used in the new study could also provide a template for interpreting data for future missions, the researchers say.

“What this paper shows is that you can get really different results depending upon the type of organic material you use to compare with and interpret the Ceres data,” said Hannah Kaplan, a postdoctoral researcher at the Southwest Research Institute who led the research while completing her Ph.D. at Brown. “That’s important not only for Ceres, but also for missions that will soon explore asteroids that may also contain organic material.”

Organic molecules are the chemical building blocks for life. Their detection on Ceres doesn’t mean life exists there or ever existed there; non-biological processes can give rise to organic molecules as well. But because life as we know it can’t exist without organic material, scientists are interested in how it’s distributed through the solar system. The presence of organic material on Ceres raises intriguing possibilities, particularly because the dwarf planet is also rich in water ice, and water is another necessary component for life.

The original discovery of organics on Ceres was made using the Visible and Infrared (VIR) Spectrometer on the Dawn spacecraft, which went into orbit around the dwarf planet in 2015. By analyzing the patterns in which sunlight interacts with the surface — looking carefully at which wavelengths are reflected and which are absorbed — scientists can get an idea of what compounds are present on Ceres. The VIR instrument picked up a signal consistent with organic molecules in the region of Ernutet Crater on Ceres’ northern hemisphere.

To get an initial idea of how abundant those compounds might be, the original research team compared the VIR data from Ceres with laboratory reflectance spectra of organic material formed on Earth. Based on that standard, the researchers concluded that between six and 10 percent of the spectral signature they detected on Ceres could be explained by organic matter.

But for this new research, Kaplan and her colleagues wanted to re-examine those data using a different standard. Instead of relying on Earth rocks to interpret the data, the team turned to an extraterrestrial source: meteorites. Some meteorites — chunks of carbonaceous chondrite that have fallen to Earth after being ejected from primitive asteroids — have been shown to contain organic material that’s slightly different from what’s commonly found on our own planet. And Kaplan’s work shows that the spectral reflectance of the extraterrestrial organics is distinct from that of terrestrial counterparts.

“What we find is that if we model the Ceres data using extraterrestrial organics, which may be a more appropriate analog than those found on Earth, then we need a lot more organic matter on Ceres to explain the strength of the spectral absorption that we see there,” Kaplan said. “We estimate that as much as 40 to 50 percent of the spectral signal we see on Ceres is explained by organics. That’s a huge difference compared to the six to 10 percent previously reported based on terrestrial organic compounds.”

If the concentration of organics on Ceres is indeed that high, it raises a host of new questions about the source of that material. There are two competing possibilities for where Ceres’ organics may have come from. They could have been produced internally on Ceres and then exposed on the surface, or they could have been delivered to the surface by an impact from an organic-rich comet or asteroid.

This new study suggests that if the organics were delivered, then the potential high concentrations of the organics would be more consistent with impact by a comet rather than an asteroid. Comets are known to have significantly higher internal abundances of organics compared with primitive asteroids, potentially similar to the 40 to 50 percent figure this study suggests for these locations on Ceres. However, the heat of an impact would likely destroy a substantial amount of a comet’s organics, so whether or not such high abundances could even be explained by a cometary impact remains unclear, the researchers say.

The alternative explanation, that the organics formed directly on Ceres, raises questions too. The detection of organics has so far been limited to small patches on Ceres’ northern hemisphere. Such high concentrations in such small areas require an explanation.

“If the organics are made on Ceres, then you likely still need a mechanism to concentrate it in these specific locations or at least to preserve it in these spots,” said Ralph Milliken, an associate professor in Brown’s Department of Earth, Environmental and Planetary Sciences and a study co-author. “It’s not clear what that mechanism might be. Ceres is clearly a fascinating object, and understanding the story and origin of organics in these spots and elsewhere on Ceres will likely require future missions that can analyze or return samples.”

For now the researchers hope this study will be helpful in informing upcoming sample return missions to near-Earth asteroids that are also thought to host water-bearing minerals and organic compounds. The Japanese spacecraft Hayabusa2 is expected to arrive at the asteroid Ryugu in several weeks, and NASA’s OSIRIS-REx mission is due to reach the asteroid Bennu in August. Kaplan is currently a science team member with the OSIRIS-REx mission.

“I think the work that went into this study, which included new laboratory measurements of important components of primitive meteorites, can provide a framework of how to better interpret data of asteroids and make links between spacecraft observations and samples in our meteorite collection,” Kaplan said. “As a new member to the OSIRIS-REx team, I’m particularly interested in how this might apply to our mission.”

The research was funded by the NASA Astrobiology Institute and the NASA Solar System Exploration Research Virtual Institute at Brown.