When and how did the first people come to the Americas?

The conventional story says that the earliest settlers came via Siberia, crossing the now-defunct Bering land bridge on foot and trekking through Canada when an ice-free corridor opened up between massive ice sheets toward the end of the last ice age.

But with recent archaeological evidence casting doubt on this thinking, scientists are seeking new explanations.

One dominant, new theory: The first Americans took a coastal route along Alaska’s Pacific border to enter the continent. 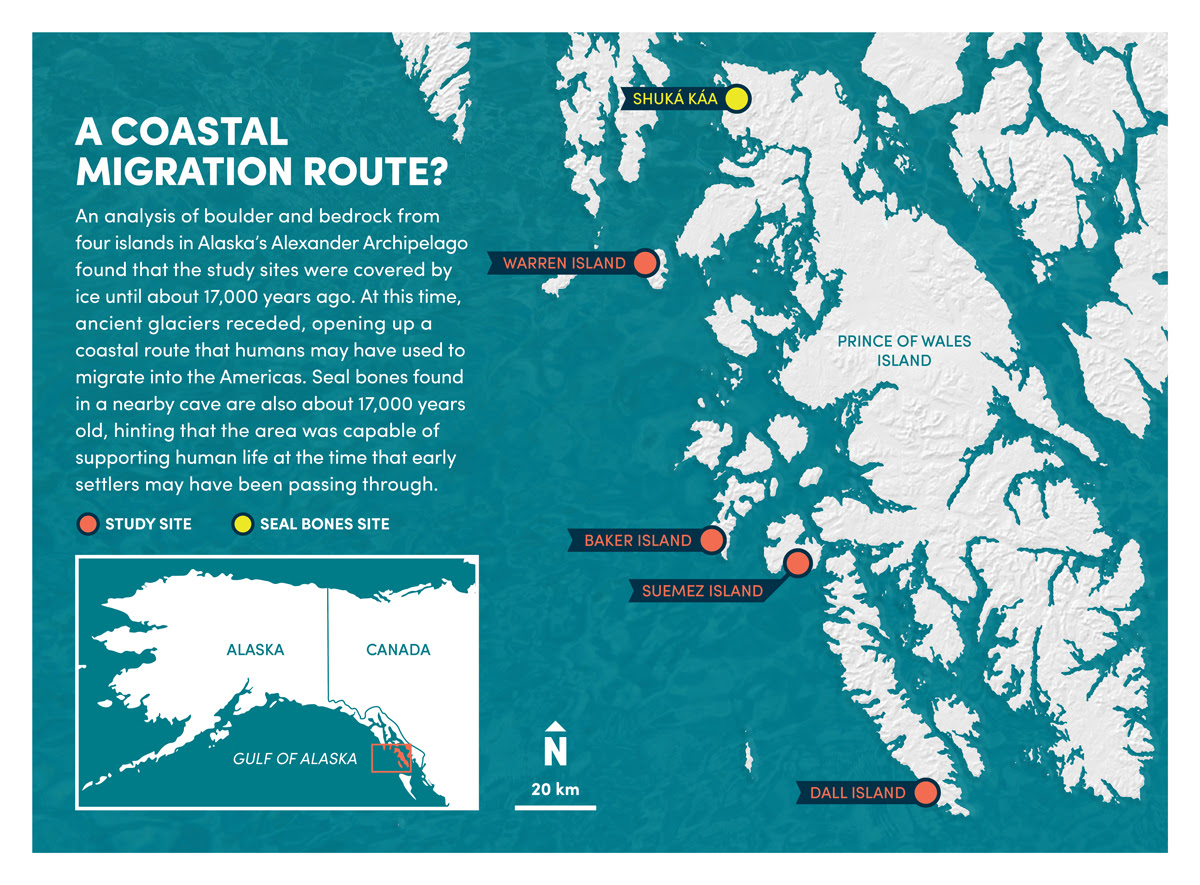 By analyzing boulders and bedrock, a research team led by the University at Buffalo shows that part of a coastal migration route became accessible to humans 17,000 years ago. During this period, ancient glaciers receded, exposing islands of southern Alaska’s Alexander Archipelago to air and sun — and, possibly, to human migration.

The timing of these events is key: Recent genetic and archaeological estimates suggest that settlers may have begun traveling deeper into the Americas some 16,000 years ago, soon after the coastal gateway opened up.

The research was published on May 30 in the journal Science Advances.

“People are fascinated by these questions of where they come from and how they got there,” says lead scientist Jason Briner, PhD, professor of geology in UB’s College of Arts and Sciences. “Our research contributes to the debate about how humans came to the Americas. It’s potentially adding to what we know about our ancestry and how we colonized our planet.”

“Our study provides some of the first geologic evidence that a coastal migration route was available for early humans as they colonized the New World,” says UB geology PhD candidate Alia Lesnek, the study’s first author. “There was a coastal route available, and the appearance of this newly ice-free terrain may have spurred early humans to migrate southward.”

The findings do not mean that early settlers definitely traversed Alaska’s southern coast to spread into the Americas: The project examined just one section of the coast, and scientists would need to study multiple locations up and down the coastline to draw firmer conclusions.

Still, the work is exciting because it hints that the seafaring theory of migration is viable.

The bones of an ancient ringed seal — previously discovered in a nearby cave by other researchers — provide further, tantalizing clues. They hint that the area was capable of supporting human life at the time that early settlers may have been passing through, Briner says. The new study calculates that the seal bones are about 17,000 years old. This indicates that the region was ecologically vibrant soon after the ice retreated, with resources including food becoming available.

A landscape, touched by ice, that tells a story

To conduct their study, the scientists journeyed to four islands within the Alexander Archipelago that lie about 200 miles south/southeast of Juneau.

The team traveled by helicopter to reach these remote destinations. As soon as the researchers arrived, Briner knew that the islands had once been covered by ice.

To collect data, the research team traveled by helicopter to remote sites within the Alexander Archipelago in southeast Alaska. 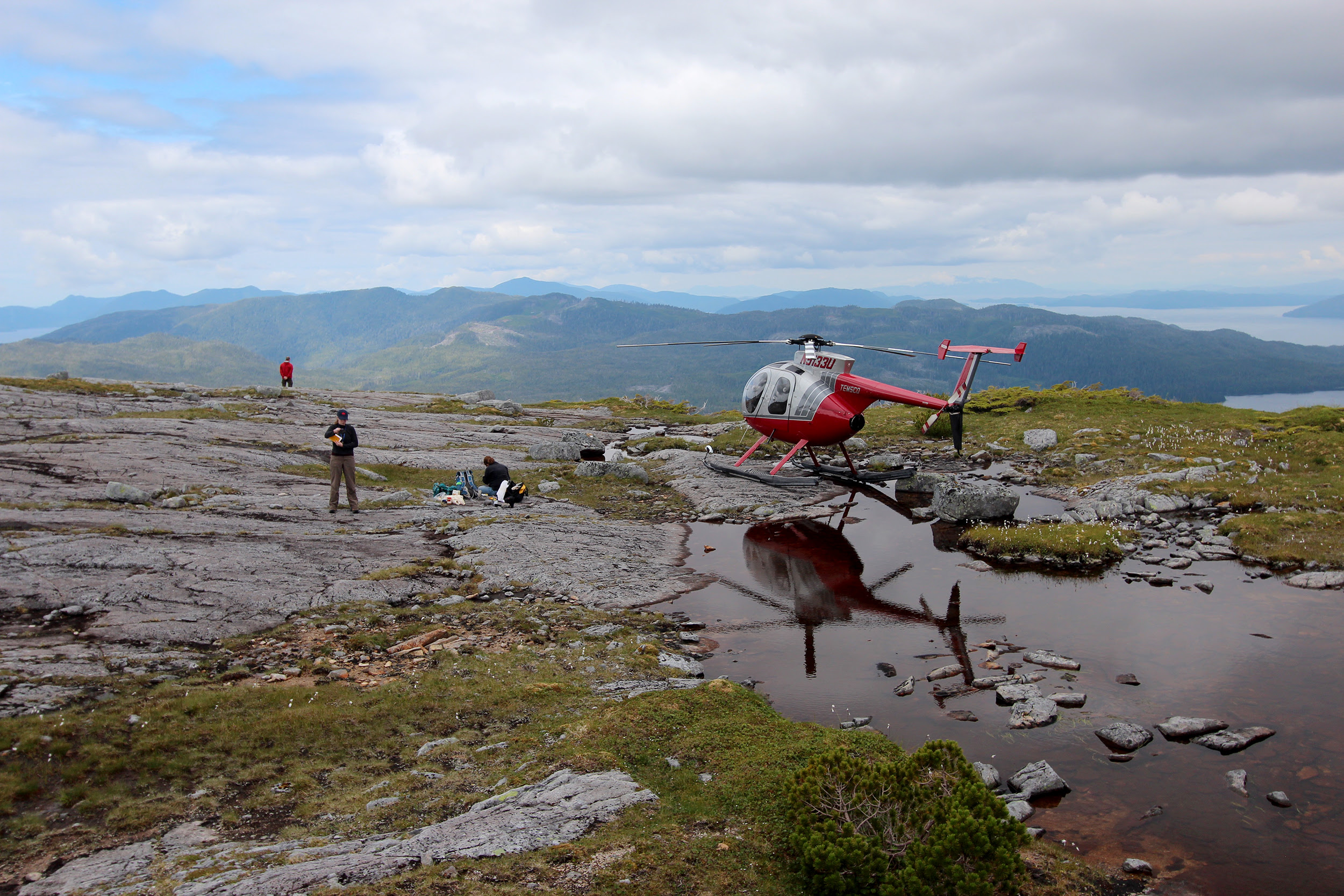 
“The landscape is glacial,” he says. “The rock surfaces are smooth and scratched from when the ice moved over it, and there are erratic boulders everywhere. When you are a geologist, it hits you in the face. You know it immediately: The glacier was here.”

To pinpoint when the ice receded from the region, the team collected bits of rock from the surfaces of boulders and bedrock. Later, the scientists ran tests to figure out how long the samples — and thus the islands as a whole — had been free of ice. 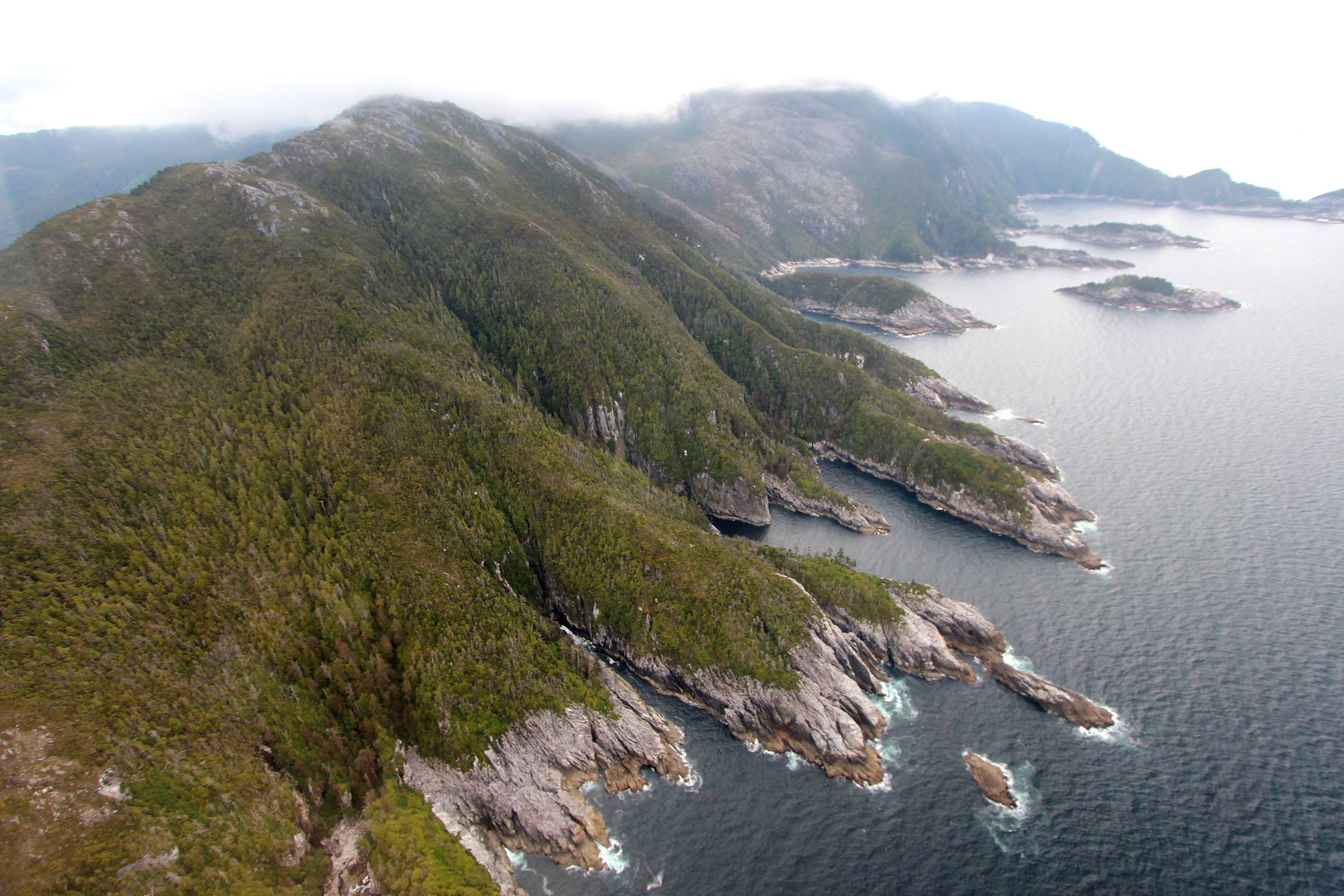 
The researchers used a method called surface exposure dating. As Lesnek explains, “When land is covered by a glacier, the bedrock in the area is hidden under ice. As soon as the ice disappears, however, the bedrock is exposed to cosmic radiation from space, which causes it to accumulate certain chemicals on their surface. The longer the surface has been exposed, the more of these chemicals you get. By testing for these chemicals, we were able to determine when our rock surfaces were exposed, which tells us when the ice retreated. 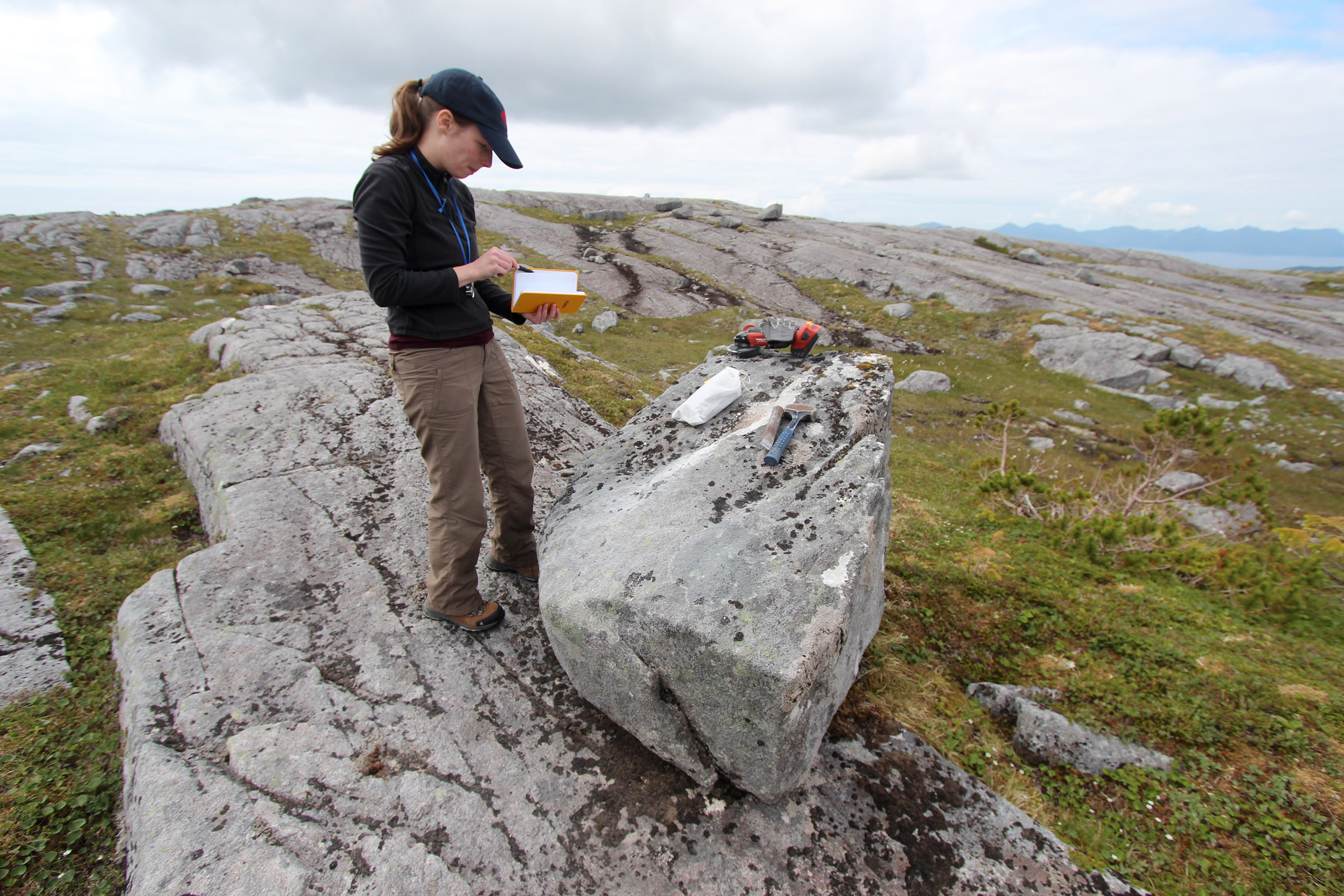 
“We use the same dating method for huge boulders called erratics. These are big rocks that are plucked from the Earth and carried to new locations by glaciers, which actually consist of moving ice. When glaciers melt and disappear from a specific region, they leave these erratics behind, and surface exposure dating can tell us when the ice retreated.”

For the region that was studied, this happened roughly 17,000 years ago.

The case for a coastal migration route 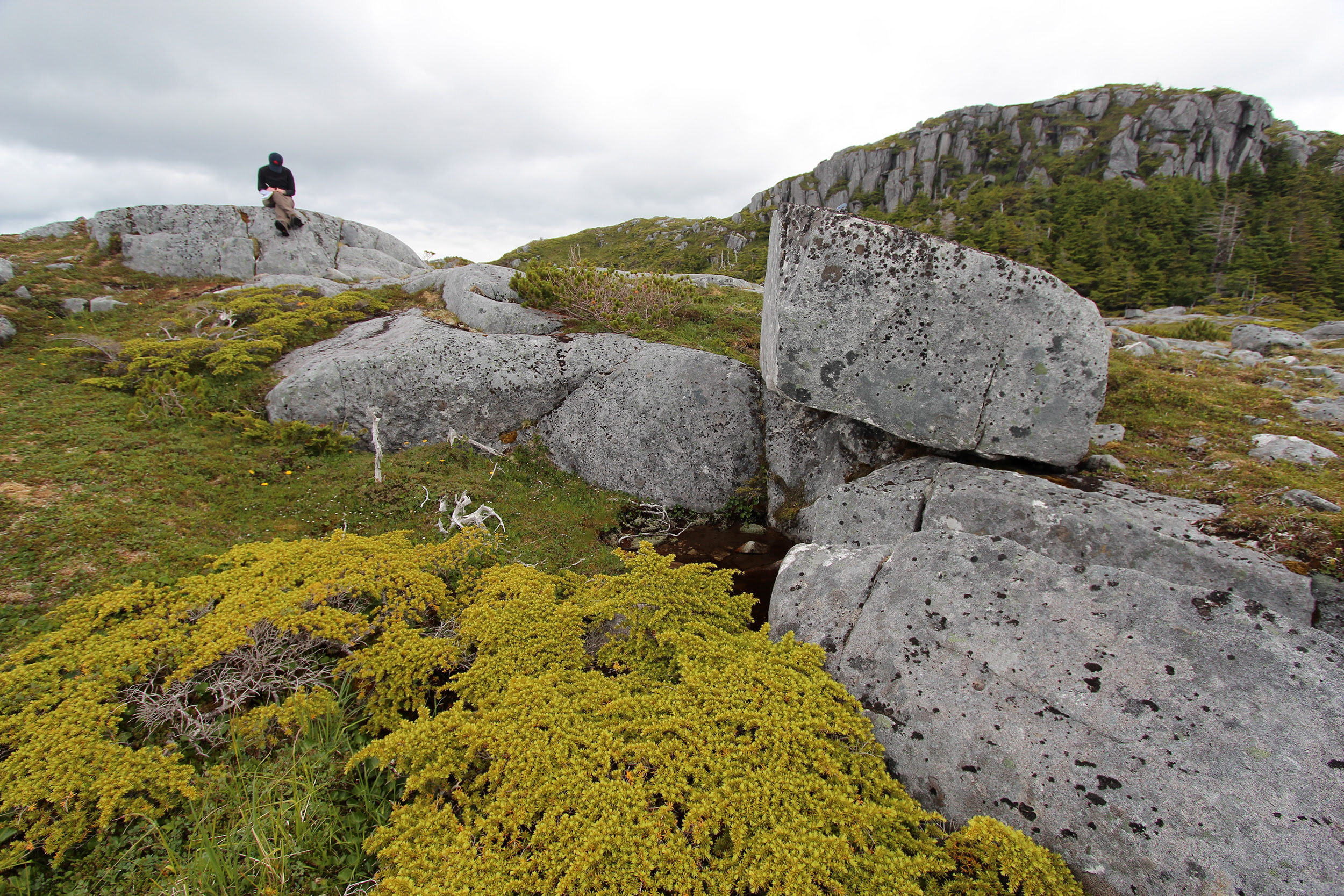 In recent years, evidence has mounted against the conventional thinking that humans populated North America by taking an inland route through Canada.

To do so, they would have needed to walk through a narrow, ice-free ribbon of terrain that appeared when two major ice sheets started to separate. But recent research suggests that while this path may have opened up more than 14,000 years ago, it did not develop enough biological diversity to support human life until about 13,000 years ago, Briner says.

This bedrock surface on Dall Island was covered by a thick ice sheet during the last Ice Age. A new study finds that the ice retreated from Dall Island and other parts of Alaska’s Alexander Archipelago about 17,000 years ago, opening a possible route for human migration into the Americas. 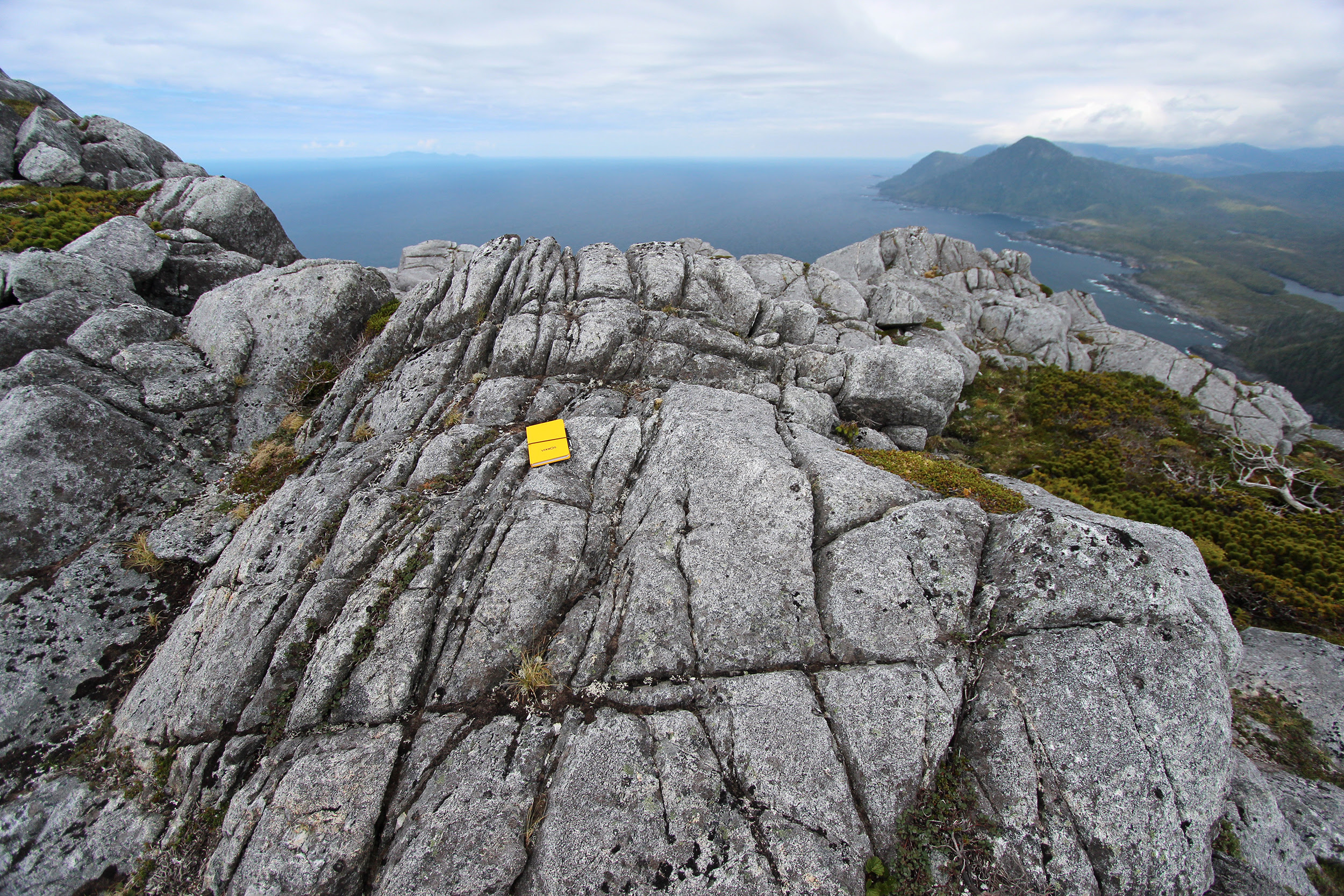 
That clashes with archaeological findings that suggest humans were already living in Chile about 15,000 years ago or more and in Florida 14,500 years ago.

The coastal migration theory provides an alternative narrative, and the new study may mark a step toward solving the mystery of how humans came to the Americas.

“Where we looked at it, the coastal route was not only open — it opened at just the right time,” Lindqvist says. “The timing coincides almost exactly with the time in human history that the migration into the Americas is thought to have occurred.”
University at Buffalo geology professor Jason Briner collecting rock samples on Dall Island, Southeast Alaska. The samples, collected from mountain summits directly facing the Pacific Ocean (pictured in the background), were used to determine when Ice Age glaciers retreated from the area, making it available as a migration route. 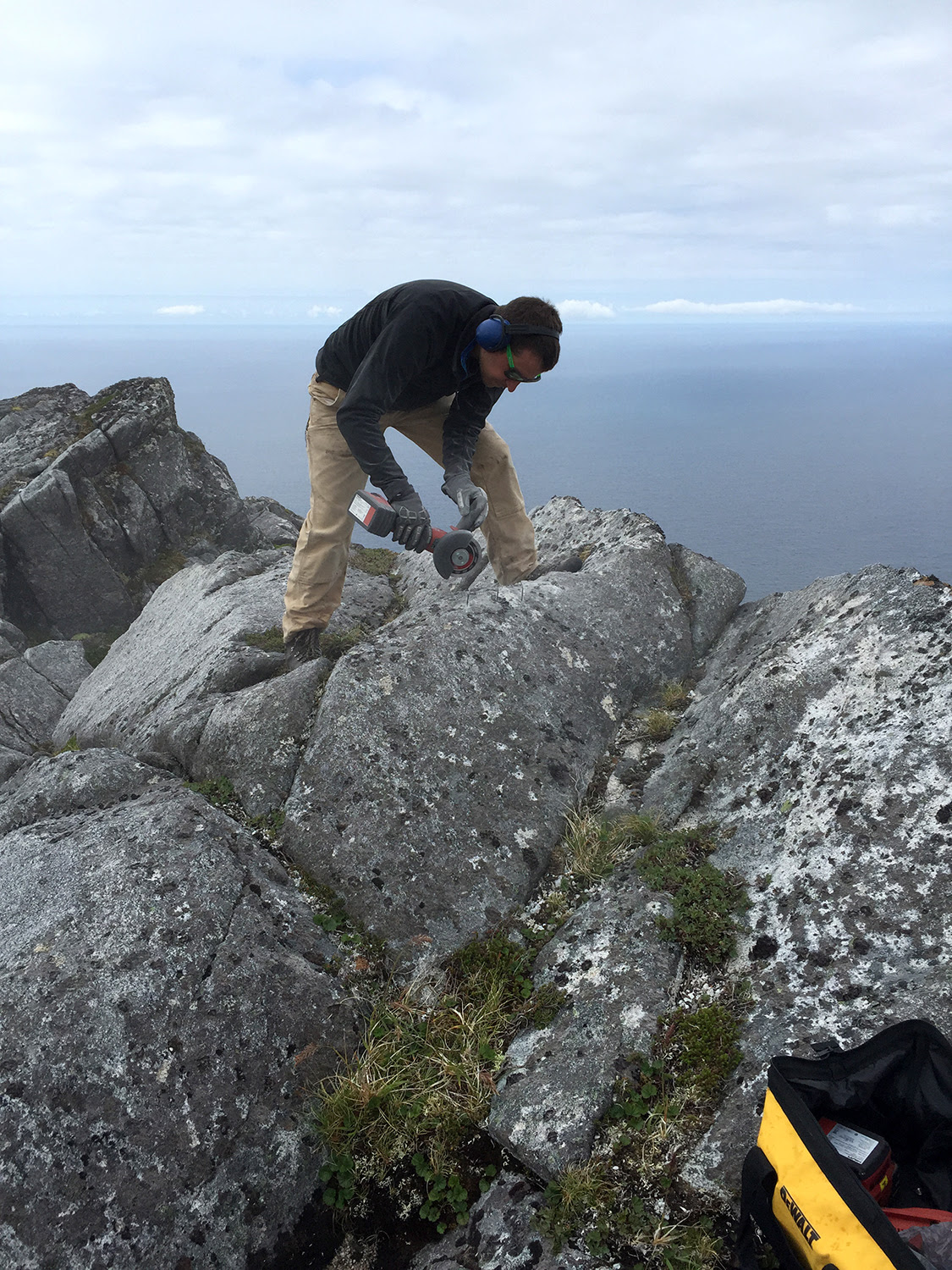 
The research was funded by a UB IMPACT award, and Lesnek’s work on the project, which will contribute to her dissertation, was supported by the National Science Foundation.