Extreme Fluctuations in Oxygen, Not A Gradual Rise, May Have Sparked the Cambrian Explosion

Five hundred and forty million years ago, during the Cambrian period, life suddenly went nuts. "Blossomed" is far too mild a word: instead, geologists call this sudden diversification an "explosion." But what exactly sparked the Cambrian explosion?

Now, a new study suggests that wild swings in oxygen levels may have sent life scrambling to adapt, leading to a major burst of diversity. That, says lead author Guangyi Wei of Yale University, challenges the long-held explanation that gradually rising oxygen simply reached a life-fueling tipping point. The study was just published online ahead of print in Geology.

Opabinia made the largest single contribution to modern interest in the Cambrian explosion. 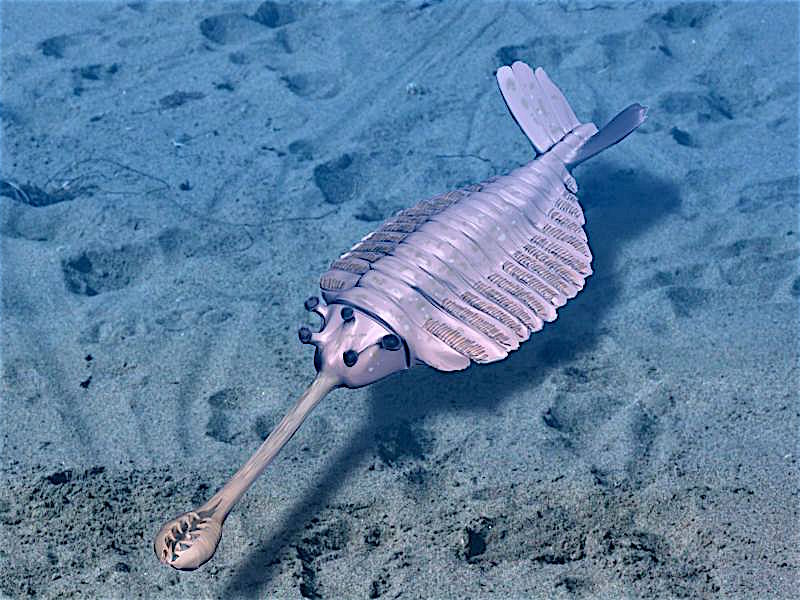 Wei explains that the goal was to reconstruct a continuous record of global marine oxygen levels from the late Ediacaran (latest pre-Cambrian) into the early Cambrian. To do that, the team, from Yale and Nanjing University in China, measured changes in uranium isotope ratios that reflect changing marine oxygen levels, as recorded in carbonates deposited during that interval, from China.

The results revealed huge global swings from anoxic-completely depleted in oxygen to oxygenated conditions over periods of two to ten million years. Such big ups and downs in oxygen, the scientists suggest, could have destabilized ecosystems, fragmented habitats, and triggered an explosion of changing life forms.

The study provides some of the first direct evidence that the Cambrian explosion came on the heels of major variations in oxygen, says Wei. "It would be great to get more data from other regions and time intervals," he adds.

Wei also poses the obvious next question: what caused such huge swings in oxygen in the first place? Some possibilities: Tectonics, biological processes, or climate shifts.