Electronic textiles could allow a person to control household appliances or computers from a distance simply by touching a wristband or other item of clothing — something that could be particularly helpful for those with limited mobility. Now researchers, reporting in ACS Nano, have developed a new type of e-textile that is self-powered, highly sensitive and washable. 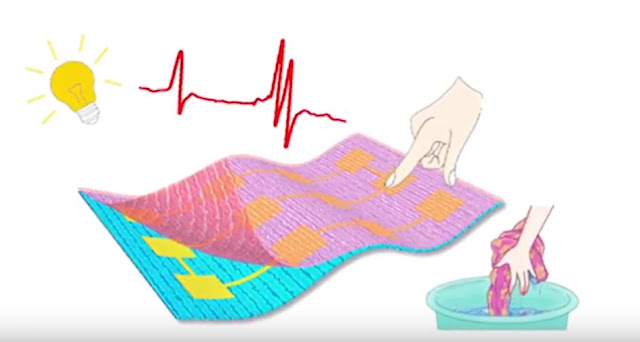 E-textiles are not new, but most existing versions have poor air permeability, can’t be laundered or are too costly or complex to mass-produce. Jiaona Wang, Hengyu Guo, Congju Li and coworkers wanted to develop an E-textile that overcomes all of these limitations and is highly sensitive to human touch.

The researchers made a self-powered triboelectric nanogenerator by depositing an electrode array of conductive carbon nanotubes on nylon fabric. To make the E-textile washable, they incorporated polyurethane into the carbon nanotube ink, which made the nanotubes firmly adhere to the fabric.

A video of an e-wristband in action

They covered the array with a piece of silk and fashioned the textile into a wristband. When swiped with a finger in different patterns, the E-textile generated electrical signals that were coupled to computers to control programs, or to household objects to turn on lights, a fan or a microwave from across the room. The E-textile is breathable for human skin, washable and inexpensive to produce on a large scale, the researchers say.