Distant Moons May Be Home to Alien Life

We've all heard about the search for life on other planets, but what about looking on other moons?

In a paper published Wednesday (June 13) in The Astrophysical Journal, researchers at the University of California, Riverside and the University of Southern Queensland have identified more than 100 giant planets that potentially host moons capable of supporting life. Their work will guide the design of future telescopes that can detect these potential moons and look for tell-tale signs of life, called biosignatures, in their atmospheres.

Since the 2009 launch of NASA's Kepler telescope, scientists have identified thousands of planets outside our solar system, which are called exoplanets. A primary goal of the Kepler mission is to identify planets that are in the habitable zones of their stars, meaning it's neither too hot nor too cold for liquid water -- and potentially life -- to exist.

This is an artist's illustration of a potentially habitable exomoon orbiting a giant planet in a distant solar system. 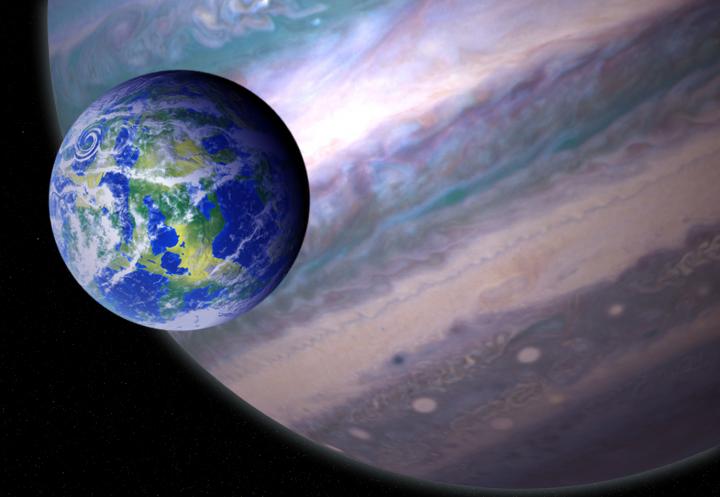 Terrestrial (rocky) planets are prime targets in the quest to find life because some of them might be geologically and atmospherically similar to Earth. Another place to look is the many gas giants identified during the Kepler mission. While not a candidate for life themselves, Jupiter-like planets in the habitable zone may harbor rocky moons, called exomoons, that could sustain life.

"There are currently 175 known moons orbiting the eight planets in our solar system. While most of these moons orbit Saturn and Jupiter, which are outside the Sun's habitable zone, that may not be the case in other solar systems," said Stephen Kane, an associate professor of planetary astrophysics and a member of the UCR's Alternative Earths Astrobiology Center. "Including rocky exomoons in our search for life in space will greatly expand the places we can look."

This is an artist's illustration of a potentially habitable exomoon orbiting a giant planet in a distant solar system. 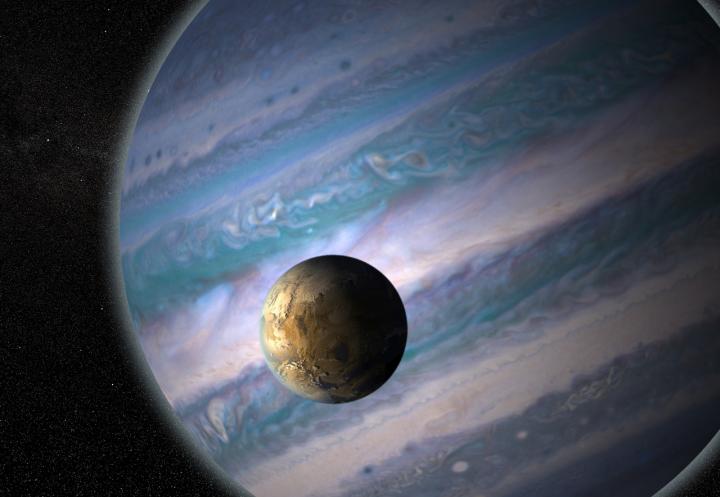 
The researchers identified 121 giant planets that have orbits within the habitable zones of their stars. At more than three times the radii of the Earth, these gaseous planets are less common than terrestrial planets, but each is expected to host several large moons.

Scientists have speculated that exomoons might provide a favorable environment for life, perhaps even better than Earth. That's because they receive energy not only from their star, but also from radiation reflected from their planet. Until now, no exomoons have been confirmed.

"Now that we have created a database of the known giant planets in the habitable zone of their star, observations of the best candidates for hosting potential exomoons will be made to help refine the expected exomoon properties. Our follow-up studies will help inform future telescope design so that we can detect these moons, study their properties, and look for signs of life," said Michelle Hill, an undergraduate student at the University of Southern Queensland who is working with Kane and will join UCR's graduate program in the fall.

Citation: "Exploring Kepler Giant Planets in the Habitable Zone." In addition to Hill, who is the is lead author, and Kane, other contributors are: Eduardo Seperuelo Duarte from Instituto Federal do Rio de Janeiro in Brazil; Ravi K. Kopparapu from the NASA Goddard Flight Center in Maryland; Dawn M. Gelino from the NASA Exoplanet Science Institute at Caltech; and Robert A. Wittenmyer from University of Southern Queensland. http://dx.doi.org/10.3847/1538-4357/aac384
on June 16, 2018