The new field of biohybrid robotics involves the use of living tissue within robots, rather than just metal and plastic. Muscle is one potential key component of such robots, providing the driving force for movement and function. However, in efforts to integrate living muscle into these machines, there have been problems with the force these muscles can exert and the amount of time before they start to shrink and lose their function.

Now, in a study reported in the journal Science Robotics, researchers at The University of Tokyo Institute of Industrial Science have overcome these problems by developing a new method that progresses from individual muscle precursor cells, to muscle-cell-filled sheets, and then to fully functioning skeletal muscle tissues. They incorporated these muscles into a biohybrid robot as antagonistic pairs mimicking those in the body to achieve remarkable robot movement and continued muscle function for over a week.

Researchers at the University of Tokyo Institute of Industrial Science developed a novel method of growing whole muscles from hydrogel sheets impregnated with myoblasts. They then incorporated these muscles as antagonistic pairs into a biohybrid robot, which successfully performed manipulations of objects. This approach overcame earlier limitations of a short functional life of the muscles and their ability to exert only a weak force, paving the way for more advanced biohybrid robots. 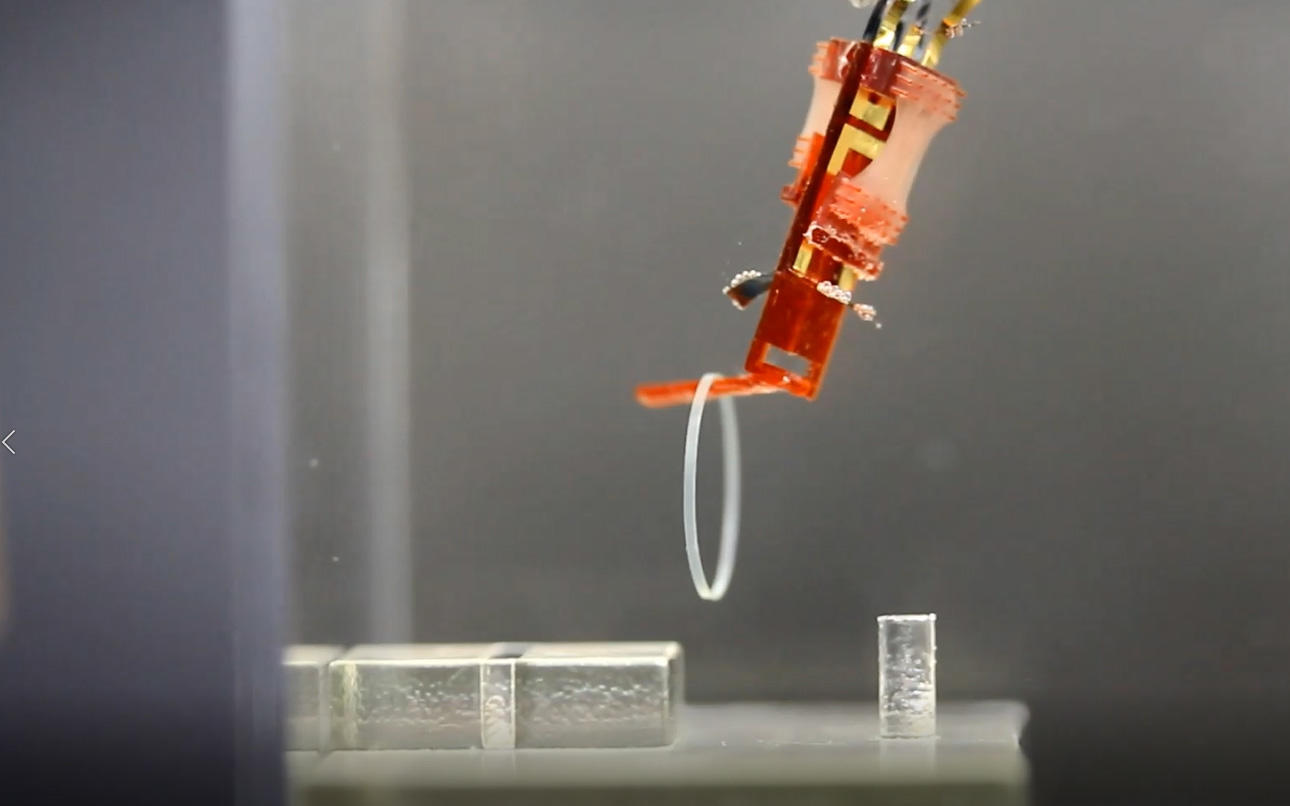 The team first constructed a robot skeleton on which to install the pair of functioning muscles. This included a rotatable joint, anchors where the muscles could attach, and electrodes to provide the stimulus to induce muscle contraction. For the living muscle part of the robot, rather than extract and use a muscle that had fully formed in the body, the team built one from scratch. For this, they used hydrogel sheets containing muscle precursor cells called myoblasts, holes to attach these sheets to the robot skeleton anchors, and stripes to encourage the muscle fibers to form in an aligned manner.

"Once we had built the muscles, we successfully used them as antagonistic pairs in the robot, with one contracting and the other expanding, just like in the body," study corresponding author Shoji Takeuchi says. "The fact that they were exerting opposing forces on each other stopped them shrinking and deteriorating, like in previous studies."

The team also tested the robots in different applications, including having one pick up and place a ring, and having two robots work in unison to pick up a square frame. The results showed that the robots could perform these tasks well, with activation of the muscles leading to flexing of a finger-like protuberance at the end of the robot by around 90°.

"Our findings show that, using this antagonistic arrangement of muscles, these robots can mimic the actions of a human finger," lead author Yuya Morimoto says. "If we can combine more of these muscles into a single device, we should be able to reproduce the complex muscular interplay that allow hands, arms, and other parts of the body to function."