Crop Production Soars By 47% By Speeding Up Photorespiration

Plants such as soybeans and wheat waste between 20 and 50 percent of their energy recycling toxic chemicals created when the enzyme Rubisco—the most prevalent enzyme in the world—grabs oxygen molecules instead of carbon dioxide molecules. Increasing production of a common, naturally occurring protein in plant leaves could boost the yields of major food crops by almost 50 percent, according to a new study led by scientists at the University of Essex published in Plant Biotechnology Journal.

In this study, the team engineered a model crop to overexpress a native protein that is involved in the recycling process called photorespiration. Over two years of field trials, they found that increasing the H-protein in the plants’ leaves increases production 27 to 47 percent. However, increasing this protein throughout the plant stunts growth and metabolism, resulting in four-week-old plants that are half the size of their unaltered counterparts.


Credit: University of Illinois at Urbana-Champaign

This work is part of the international research project Realizing Increased Photosynthetic Efficiency (RIPE) that is supported by Bill & Melinda Gates Foundation, the Foundation for Food and Agriculture Research, and U.K. Department for International Development.

Patricia Lopez-Calcagno (left) and Kenny Brown (right) evaluate a field trial that helped prove that increasing a protein in the leaves of crops can increase production by nearly 50 percent. 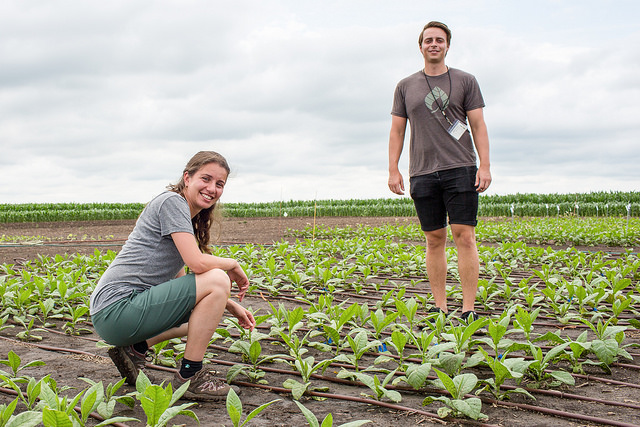 
“Plant scientists have traditionally used promoters that express proteins at high levels throughout the plant, and there are many examples where this has worked really well,” said the lead author Patricia Lopez-Calcagno, a senior research officer at Essex. “But for the H-protein, we showed that more is not always better demonstrating that when we translate this method to other crop plants, we will need to tune the changes in protein to the right levels in the right tissues.”

Previous studies increased H-protein levels in Arabidopsis, a small model plant used in laboratory experiments. This is the first time that the H-protein has been evaluated in a crop in real-world growing conditions. The team used tobacco, widely considered the lab rat of plant biology because it is easy to genetically engineer and can be quickly grown and tested in outdoor field trials. Once a modification has been proven to be effective in tobacco, the same approach can be applied to food crops that are needed to feed our growing population.

Aerial view of the 2017 field trial that showed that fine-tuning the increased expression of a protein can boost production by nearly 50 percent. 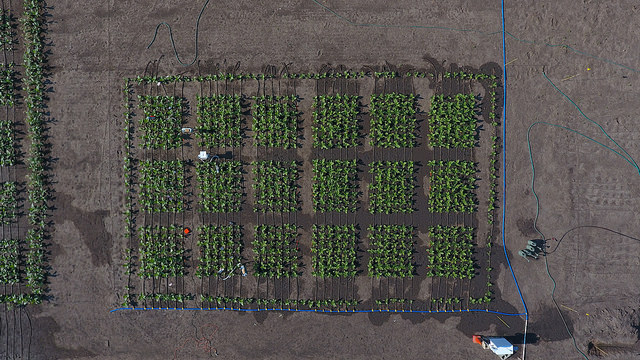 Credit:Claire Benjamin and Beau Barber.  University of Illinois at Urbana-Champaign


“The reality is that as growing season temperatures continue to increase, the yield hit caused by photorespiration will also increase,” said co-author Paul South, a USDA-ARS postdoctoral researcher in the Carl R. Woese Institute for Genomic Biology at the University of Illinois. “If we can translate this discovery to food crops, we can equip farmers with resilient plants capable of producing more food despite increasing temperature stress.”

Next, the team plans to increase the levels of this naturally occurring protein in soybeans, cowpeas (black-eyed peas), and cassava, a tropical root crop that is a staple for more than a billion people around the world. Their goal is to increase the yields and opportunities for farmers worldwide, particularly smallholder farmers in Sub-Saharan Africa and Southeast Asia.

To further increase yields, the team plans to combine this trait with others developed by the RIPE project, including a method reported in Science that boosted production by 20 percent by helping plants adapt to fluctuating light levels more quickly.

“Improvements obtained with the individual trait described here, brings us one step closer to meeting the imminent food demands of 2050—Additionally, by combining this trait with other successful traits in RIPE, we can make the yield gains needed to feed this century’s growing population,” said Principal Investigator Christine Raines, a professor of plant molecular physiology at Essex. “We are committed to developing these sustainable technologies as quickly as possible and ensuring that the farmers and communities who need them most have global access.”