7000 Years Ago, A Weird Thing Affected Men But Not Women

Genetic data suggest there was a collapse in male, but not female, genetic diversity starting 7,000 years ago. The reason may be wars between clans structured around male ancestry.

Starting about 7,000 years ago, something weird seems to have happened to men: Over the next two millennia, recent studies suggest, their genetic diversity –specifically, the diversity of their Y chromosomes – collapsed. So extreme was that collapse that it was as if there were only one man left to mate for every 17 women.

Undergraduates Tian Chen Zeng, left, and Alan Aw, right, worked with Marcus Feldman, a professor of biology, to show how social structure could explain a genetic puzzle about humans of the Stone Age. 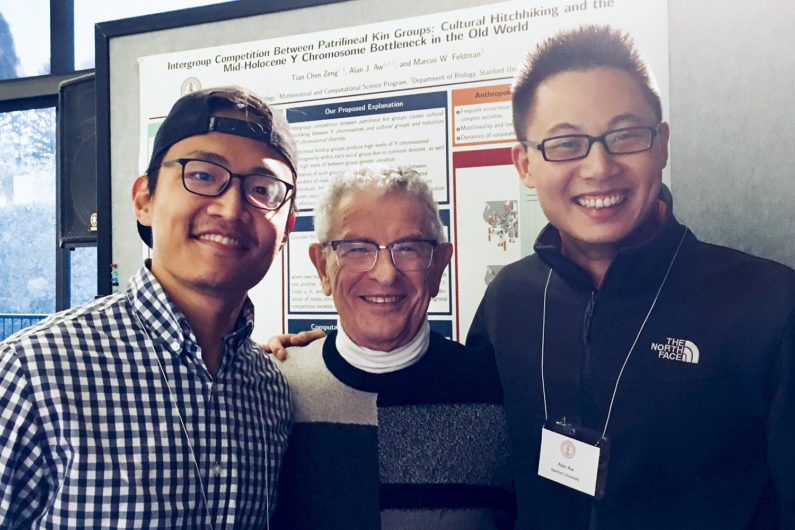 Anthropologists and biologists were perplexed, but Stanford researchers now believe they’ve found a simple – if revealing – explanation. The collapse, they argue, was the result of generations of war between patrilineal clans, whose membership is determined by male ancestors.

The outlines of that idea came to Tian Chen Zeng, a Stanford undergraduate in sociology, after spending hours reading blog posts that speculated – unconvincingly, Zeng thought – on the origins of the “Neolithic Y-chromosome bottleneck,” as the event is known. He soon shared his ideas with his high school classmate Alan Aw, also a Stanford undergraduate in mathematical and computational science.

“He was really waxing lyrical about it,” Aw said, so the pair took their idea to Marcus Feldman, a professor of biology in Stanford’s School of Humanities and Sciences. Zeng, Aw and Feldman published their results May 25 in Nature Communications.

It’s not unprecedented for human genetic diversity to take a nosedive once in a while, but the Y-chromosome bottleneck, which was inferred from genetic patterns in modern humans, was an odd one. First, it was observed only in men – more precisely, it was detected only through genes on the Y chromosome, which fathers pass to their sons. Second, the bottleneck is much more recent than other biologically similar events, hinting that its origins might have something to do with changing social structures.

Certainly, the researchers point out, social structures were changing. After the onset of farming and herding around 12,000 years ago, societies grew increasingly organized around extended kinship groups, many of them patrilineal clans – a cultural fact with potentially significant biological consequences. The key is how clan members are related to each other. While women may have married into a clan, men in such clans are all related through male ancestors and therefore tend to have the same Y chromosomes. From the point of view of those chromosomes at least, it’s almost as if everyone in a clan has the same father.

That only applies within one clan, however, and there could still be considerable variation between clans. To explain why even between-clan variation might have declined during the bottleneck, the researchers hypothesized that wars, if they repeatedly wiped out entire clans over time, would also wipe out a good many male lineages and their unique Y chromosomes in the process.

To test their ideas, the researchers turned to mathematical models and computer simulations in which men fought – and died – for the resources their clans needed to survive. As the team expected, wars between patrilineal clans drastically reduced Y chromosome diversity over time, while conflict between non-patrilineal clans – groups where both men and women could move between clans – did not.

Zeng, Aw and Feldman’s model also accounted for the observation that among the male lineages that survived the Y-chromosome bottleneck, a few lineages underwent dramatic expansions, consistent with the patrilineal clan model, but not others.

Now the researchers are looking at applying the framework in other areas – anywhere “historical and geographical patterns of cultural interactions could explain the patterns you see in genetics,” said Feldman, who is also the Burnet C. and Mildred Finley Wohlford Professor.

Feldman said the work was a unusual example of undergraduates driving research that was broad both in terms of the academic disciplines spanned – in this case, sociology, mathematics and biology – and in terms of its potential implications for understanding the role of culture in shaping human evolution. And, he said, “Working with these talented guys is a lot of fun.”

The research was supported by the Center for Computational, Evolutionary and Human Genomics, the Morrison Institute for Population and Resource Studies and a grant from the National Science Foundation.