Tens of Millions of Years Without Sex and Still Evolving

A new study has cast doubt on leading theory for how tiny creatures have evolved for tens of millions of years - without ever having sex.

Bdelloid rotifers however appear to be an exception to this rule: they are all female, and their offspring are clones of their mothers. Bdelloids are microscopic animals that live in freshwater and damp habitats across the world. Despite their apparent lack of sex, we know they have evolved for tens of millions of years into more than 500 species. 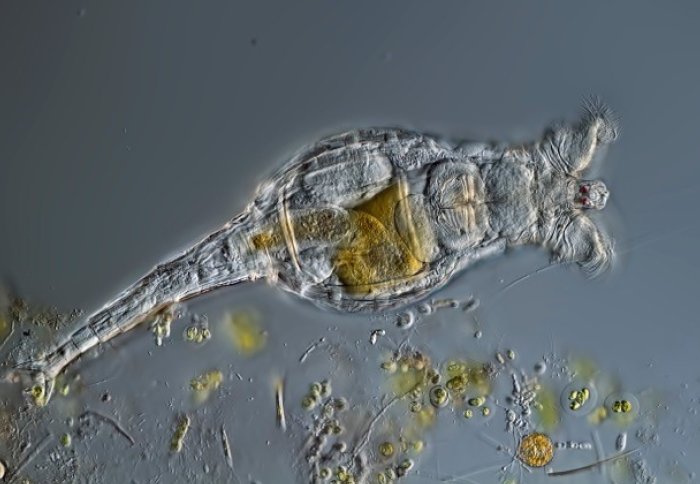 By studying their genomes – the set of all the genes that define an animal’s characteristics – researchers thought they had identified an explanation for how bdelloids had ‘gotten away’ with no sex for millions of years.

However, a new study, published today in PLOS Biology and led by Imperial College London researchers, reveals this mechanism may not be the main explanation for the bdelloids’ success.

Many species of bdelloid endure periods of drying out, called desiccation. Although they survive desiccation, the process damages their DNA, which they need to repair when rehydrated.

Based on a previous study of the genome of a species that survives desiccation, researchers had proposed that the repair of DNA might remove some of the problems of being asexual, for example by removing harmful mutations and possibly allowing occasional recombination of genes to occur.

The researchers found that the predicted differences between species that can and cannot survive desiccation were not observed. This suggests that DNA repair following desiccation may not be as important as previously thought, and that other factors may need to be considered to explain bdelloid evolution.

Senior researcher Professor Tim Barraclough, from the Department of Life Science at Imperial, said: “We have been building up this story of how these creatures manage to change based on their remarkable ability to survive desiccation.

“However, when we open up the investigation to other sexless species of bdelloid that do not dry out, we find that the story does not play out. We thought we were understanding more about these creatures, but this is a spanner in the works.”

Although the latest study shows that desiccation is not key to genome changes, the team did confirm that all the species investigated so far show unusual levels of ‘horizontal gene transfer’ - which means they incorporate and use foreign DNA from distantly related organisms in their genomes.


Bdelloid species are known to have taken up thousands of genes from plants, bacteria, fungi, and single-celled organisms. Different species appear to have adapted to their unique environments by taking up DNA that benefits their survival, providing another route to evolution.

It is not known exactly how bdelloids incorporate foreign DNA, but DNA repair following desiccation has been proposed as one route for those species that undergo drying out. Next, the team want to look more closely at these foreign genes for clues as to how they were acquired.

They also want to study the genomes of individuals within the same population over time to see how their genomes change.

Finally, although no males have ever been found, this new study of rotifers’ genomes suggests scientists can’t rule out sex as firmly as previously thought. Previous evidence had suggested that the structure of the bdelloid genome made conventional sex impossible.

Lead author Dr Reuben Nowell said: “We haven’t proved they are having sex, it’s just that we can’t prove that they aren’t based on the current genome results. Other species of rotifers have identifiable males, but no bdelloid rotifer males have ever been found.

“We will continue to investigate these fascinating creatures, but for now, the mystery has only deepened.”