Scientists are one step closer to building a carbon-recycling system that can harvest solar energy to efficiently convert CO2 and water into liquid fuels. By optimizing many parts of the system, the researchers say, they can now drive two-electron chemical reactions, a substantial advance over one-electron reactions, which are energy inefficient.

The research, reported in the journal Nature Chemistry, will aid those hoping to find a way to convert excess carbon dioxide in the atmosphere into useful energy sources, said University of Illinois chemistry professor Prashant Jain, who led the new research.

"Scientists often look to plants for insight into methods for turning sunlight, carbon dioxide and water into fuels," he said.

Under the right conditions, gold nanoparticles absorb light and transfer electrons to other reactants. This process can be used to convert CO2 and water into hydrocarbons. In the graphic, carbon atoms are black, oxygen atoms are red and hydrogen atoms are white. 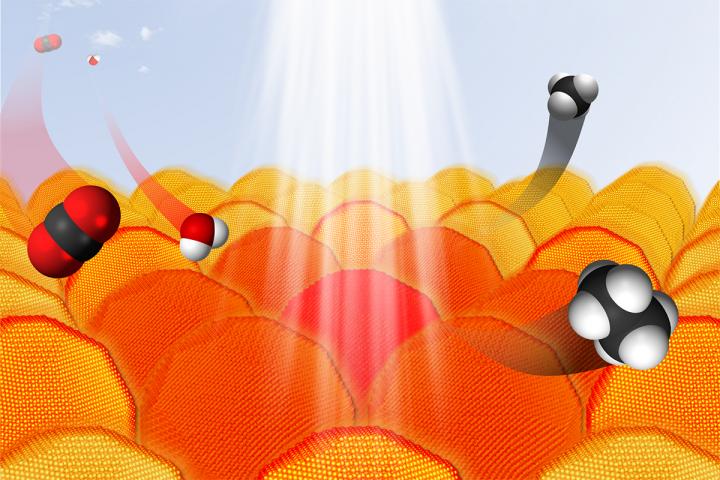 When solar energy hits plant leaves, it excites the electrons in chlorophyll. Those excited electrons ultimately drive the chemistry that transforms carbon dioxide and water into glucose.

"Many of these chemical reactions are multiproton, multielectron reactions," Jain said.

But instead of relying on biodegradable plant pigments to convert light energy into chemical energy, scientists are turning to something better: electron-rich metal catalysts like gold, which at specific light intensities and wavelengths can transfer photoexcited electrons and protons to reactants without being degraded or used up.

"In our study, we used spherical gold particles that are 13 to 14 nanometers in size," Jain said. "The nanoparticles have unique optical properties, depending on their size and shape."

When coated with a polymer and suspended in water, for example, the nanoparticles absorb green light and reflect a deep red color. Under light excitation, the nanoparticles transfer electrons to probe molecules, which then change color. This allows scientists to measure how efficiently the electron-transfer reactions are taking place.

"Researchers have managed in the past to use photochemistry and these light-absorbing materials to transfer one electron at a time," Jain said. "But in the new study, we've identified the principles and rules and conditions under which a metal nanoparticle catalyst can transfer two electrons at a time."

By varying the intensity of laser light used in the experiments, Jain and his colleagues discovered that at four to five times the intensity of solar energy, the gold nanoparticles in the system could transfer up to two electrons at a time from ethanol to an electron-hungry probe.

University of Illinois chemistry professor Prashant Jain and his colleagues report they can use light to drive two-electron chemical reactions, enhancing a method for converting CO2 into hydrocarbons. 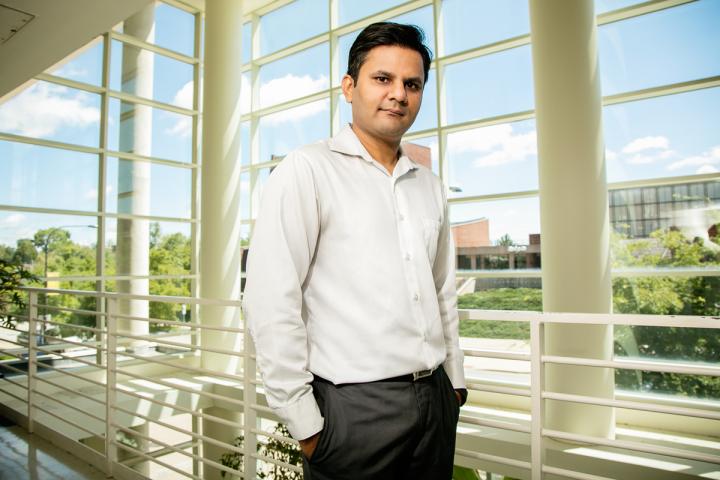 Jain also concluded that recent experiments his lab conducted using the same system also entailed multielectron, multiproton transfers. In those experiments, his lab converted CO2 to ethane, a two-carbon compound that is more energy-rich than methane, which contains only one carbon. Jain and his colleagues are hoping to eventually generate propane, which has a three-carbon backbone, and butane, which has four.

"From the point of view of chemistry, it's interesting to understand the rules for stringing carbon atoms together," Jain said. "Transferring more than one electron at a time, activating more than one carbon dioxide molecule at a time at the surface of the nanoparticle catalyst can get us access to higher hydrocarbons."

While the new findings represent an important step forward, much more work must be done before this technology is ready to be employed and scaled up to meet current challenges, Jain said.

"There's still a long way to go. I think we'll need at least a decade to find practical CO2-sequestration, CO2-fixation, fuel-formation technologies that are economically feasible," he said. "But every insight into the process improves the pace at which the research community can move."

The paper "Harvesting multiple electron-hole pairs generated through plasmonic excitation of Au nanoparticles" is available online
on May 16, 2018