Iron-rich rocks near ancient lake sites on Mars could hold vital clues that show life once existed there, research suggests.

These rocks - which formed in lake beds - are the best place to seek fossil evidence of life from billions of years ago, researchers say.

A new study that sheds light on where fossils might be preserved could aid the search for traces of tiny creatures - known as microbes - on Mars, which it is thought may have supported primitive life forms around four billion years ago. 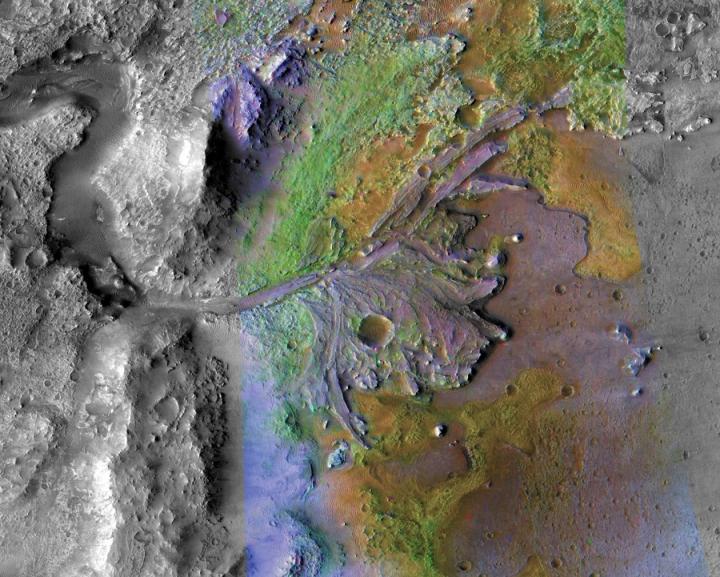 A team of scientists has determined that sedimentary rocks made of compacted mud or clay are the most likely to contain fossils. These rocks are rich in iron and a mineral called silica, which helps preserve fossils.

They formed during the Noachian and Hesperian Periods of Martian history between three and four billion years ago. At that time, the planet's surface was abundant in water, which could have supported life.

The rocks are much better preserved than those of the same age on Earth, researchers say. This is because Mars is not subject to plate tectonics - the movement of huge rocky slabs that form the crust of some planets - which over time can destroy rocks and fossils inside them.

The team reviewed studies of fossils on Earth and assessed the results of lab experiments replicating Martian conditions to identify the most promising sites on the planet to explore for traces of ancient life.

Their findings could help inform NASA's next rover mission to the Red Planet, which will focus on searching for evidence of past life. The US space agency's Mars 2020 rover will collect rock samples to be returned to Earth for analysis by a future mission.

A similar mission led by the European Space Agency is also planned in coming years.

The latest study of Mars rocks - led by a researcher from the University of Edinburgh - could aid in the selection of landing sites for both missions. It could also help to identify the best places to gather rock samples.

Dr Sean McMahon, a Marie Sklodowska-Curie fellow in the University of Edinburgh's School of Physics and Astronomy, said: "There are many interesting rock and mineral outcrops on Mars where we would like to search for fossils, but since we can't send rovers to all of them we have tried to prioritize the most promising deposits based on the best available information."


Contacts and sources:
Corin Campbell
University of Edinburgh
on May 28, 2018