It is normally considered that water molecules in the liquid state move randomly on ultrafast timescales due to thermal fluctuations. Scientists at Stockholm University have now discovered an unexpected correlated motion in water dynamics on a sub-100 femtoseconds timescale. This appears as “caging effects” due to buildup of molecular structures upon supercooling. The results, reported in Nature Communications are based on a combination of experimental studies using x-ray lasers and theoretical simulations.

Water is part of our everyday lives and due to its lack of color, taste and smell, it is often assumed to be very simple. This is indeed the case when we look on a molecular level. However, when many molecules come together they form a highly complex network of hydrogen bonds. The dynamics of this network is not yet fully understood and it is believed to be responsible for many of the peculiar thermodynamic and structural properties of water.

A schematic of the approach used to capture water dynamics on the ultrafast timescale. If one were able to photograph the molecules in real space with different exposure times, the image would become gradually blurry because of the motion of the molecules. This is done with x-ray scattering in the so-called reciprocal space, where the diffraction pattern is gradually smoother for longer pulse durations. 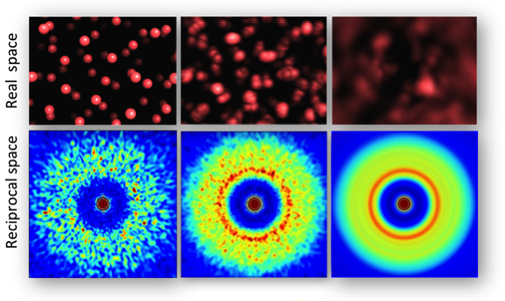 
An international team of researchers at Stockholm University carried out experiments at SLAC’s Linac Coherent Light Source (LCLS) and probed for the first time the dynamics of molecules in liquid water in the sub-100 femtosecond range. The technique that was used relies on “photographing” the water molecules as a diffractogram using the x-ray laser. By varying the x-ray pulse duration one essentially varies the exposure time of the “photograph” and thereby any motion of the water molecules during the exposure will “blur the picture”. Analysis of the blurring for different exposure times allowed the scientists to extract information about the molecular motion. On this timescale, it was assumed that water molecules move randomly due to heat, behaving more like a gas than a liquid. However the experiments indicate that the network plays a role even on this ultrafast timescale, making water molecules coordinate in an intricate dance, which becomes even more pronounced in the so called supercooled state.

“It is a brand new capability to be able to use x-ray lasers to see the motion of molecules in real time”, says Fivos Perakis, researcher at Stockholm University expert in ultrafast infrared spectroscopy and x-ray scattering. “This can open up a whole new field of investigations on this timescales, combined with the unique structural sensitivity of x-rays.”

The experimental results were reproduced by computer simulations, which indicate that the coordinated dance of water molecules is due to the formation of tetrahedral structures. “I have studied the dynamics of liquid and supercooled water for a long time using computer simulations and it is very exciting to finally be able to directly compare with experiments” says Gaia Camisasca, postdoc at Stockholm university, who performed the computer simulations of this study. “I look forward to seeing the future results that can come out from this technique, which can help improve the current water computer models”.

“It is amazing to discover something new about water using x-ray ultrafast science and I feel that there is so much more to learn” says Alexander Späh, PhD student in Chemical Physics at Stockholm University. “I really enjoy having the opportunity to use state-of-the-art x-ray facilities to investigate fundamental questions that could change our views on water.”

“Both the experiments and simulations were very challenging”, says Lars G.M. Pettersson, professor in Theoretical Chemical Physics at Stockholm University. “It is extremely gratifying that working together can reveal so much about how the molecules move together.”

“The key to understanding water on a molecular level is watching the changes of the hydrogen-bond network, which can play a major role in biological activity and life as we know it”, says Anders Nilsson, professor in Chemical Physics at Stockholm University.

These studies were led by Stockholm University and involve a collaboration including the SLAC National Accelerator Laboratory in California, KTH Royal Institute of Technology in Stockholm and DESY in Hamburg. The other participants from Stockholm University involved in the study are Harshad Pathak, Kyung Hwan Kim, Katrin Amann-Winkel, Kjartan Thor Wikfeldt and Simon Schreck.

Citation:  Coherent X-rays reveal the influence of cage effects on ultrafast water dynamics The study by Foivos Perakis et al. is published in nature.com  Nature Communications, vol. 9, p. 1917 (2018)
on May 17, 2018