How Primordial Life on Earth Might Have Replicated Itself

Scientists have created a new type of genetic replication system which demonstrates how the first life on Earth - in the form of RNA - could have replicated itself. The scientists from the Medical Research Council (MRC) Laboratory of Molecular Biology say the new RNA utilises a system of genetic replication unlike any known to naturally occur on Earth today.

A popular theory for the earliest stages of life on Earth is that it was founded on strands of RNA, a chemical cousin of DNA. Like DNA, RNA strands can carry genetic information using a code of four molecular letters (bases), but RNA can be more than a simple 'string' of information. Some RNA strands can also fold up into three-dimensional shapes that can form enzymes, called ribozymes, and carry out chemical reactions.

If a ribozyme could replicate folded RNA, it might be able to copy itself and support a simple living system.

Liquid brine containing replicating RNA molecules is concentrated in the cracks between ice crystals, as seen with an electron microscope. 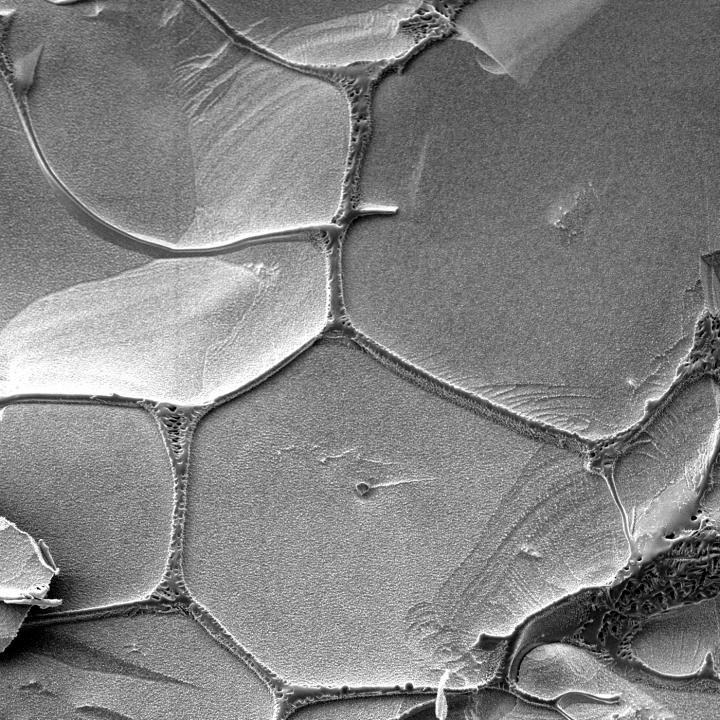 Previously, scientists had developed ribozymes that could replicate straight strands of RNA, but if the RNA was folded it blocked the ribozyme from copying it. Since ribozymes themselves are folded RNAs, their own replication is blocked.

Now, in a paper published today in the journal eLife, the scientists have resolved this paradox by engineering the first ribozyme that is able to replicate folded RNAs, including itself.

Normally when copying RNA, an enzyme would add single bases (C, G, A or U) one at a time, but the new ribozyme uses three bases joined together, as a 'triplet' (e.g. GAU). These triplet building blocks enable the ribozyme to copy folded RNA, because the triplets bind to the RNA much more strongly and cause it to unravel - so the new ribozyme can copy its own folded RNA strands.

The scientists say that the 'primordial soup' could have contained a mixture of bases in many lengths - one, two, three, four or more bases joined together - but they found that using strings of bases longer than a triplet made copying the RNA less accurate.

Dr Philipp Holliger, from the MRC Laboratory of Molecular Biology and senior author on the paper, said: "We found a solution to the RNA replication paradox by re-thinking how to approach the problem - we stopped trying to mimic existing biology and designed a completely new synthetic strategy. It is exciting that our RNA can now synthesise itself.

"These triplets of bases seem to represent a sweet spot, where we get a nice opening up of the folded RNA structures, but accuracy is still high. Notably, although triplets are not used in present-day biology for replication, protein synthesis by the ribosome - an ancient RNA machine thought to be a relic of early RNA-based life - proceeds using a triplet code.

"However, this is only a first step because our ribozyme still needs a lot of help from us to do replication. We provided a pure system, so the next step is to integrate this into the more complex substrate mixtures mimicking the primordial soup - this likely was a diverse chemical environment also containing a range of simple peptides and lipids that could have interacted with the RNA."

The experiments were conducted in ice at -7°C, because the researchers had previously discovered that freezing concentrates the RNA molecules in a liquid brine in tiny gaps between the ice crystals. This also is beneficial for the RNA enzymes, which are more stable and function better at cold temperatures.

Dr Holliger added: "This is completely new synthetic biology and there are many aspects of the system that we have not yet explored. We hope in future, it will also have some biotechnology applications, such as adding chemical modifications at specific positions to RNA polymers to study RNA epigenetics or augment the function of RNA."

Dr Nathan Richardson, Head of Molecular and Cellular Medicine at the MRC, said: "This is a really exciting example of blue skies research that has revealed important insights into how the very beginnings of life may have emerged from the 'primordial soup' some 3.7 billion years ago. Not only is this fascinating science, but understanding the minimal requirements for RNA replication and how these systems can be manipulated could offer exciting new strategies for treating human disease."