Flares in the Universe Brought Down to Earth for Study

Solar flares, cosmic radiation, and the northern lights are well known phenomena. But exactly how their enormous energy arises is not as well understood.

Now, physicists at Chalmers University of Technology, Sweden, have discovered a new way to study these spectacular space plasma phenomena in a laboratory environment. The results have been published in the renowned journal Nature Communications.

"Scientists have been trying to bring these space phenomena down to earth for a decade. With our new method we can enter a new era, and investigate what was previously impossible to study. It will tell us more about how these events occur," says Longqing Yi, researcher at the Department of Physics at Chalmers.

Solar flares are caused by magnetic reconnection in space and can interfere with our communications satellites, affecting power grids, air traffic and telephony. Now, researchers at Chalmers University of Technology, Sweden, have found a new way to imitate and study these spectacular space plasma phenomena in a laboratory environment. 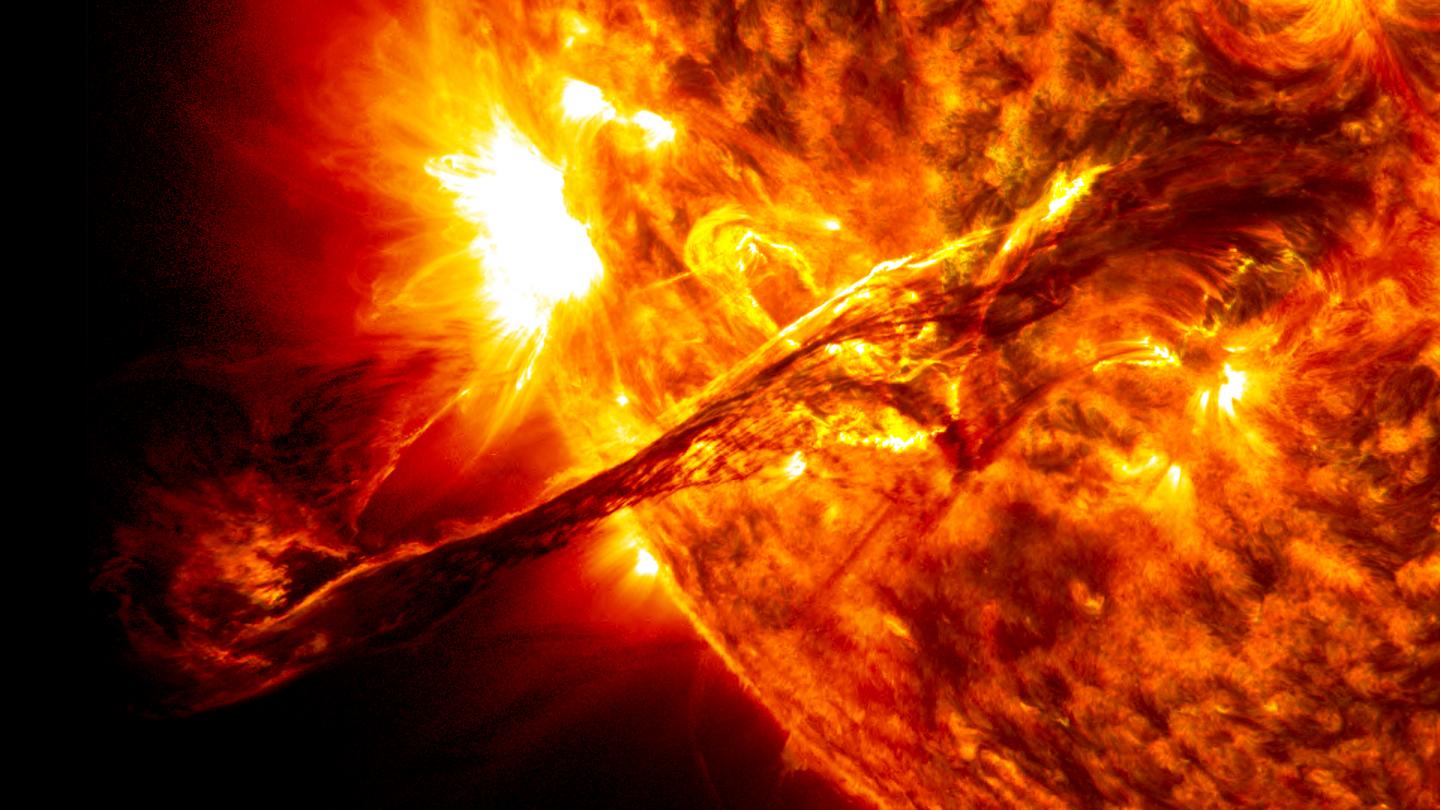 
The research concerns so-called 'magnetic reconnection' - the process which gives rise to these phenomena. Magnetic reconnection causes sudden conversion of energy stored in the magnetic field into heat and kinetic energy. This happens when two plasmas with anti-parallel magnetic fields are pushed together, and the magnetic field lines converge and reconnect. This interaction leads to violently accelerated plasma particles that can sometimes be seen with the naked eye - for example, during the northern lights.

Magnetic reconnection in space can also influence us on earth. The creation of solar flares can interfere with communications satellites, and thus affect power grids, air traffic and telephony.

In order to imitate and study these spectacular space plasma phenomena in the laboratory, you need a high-power laser, to create magnetic fields around a million times stronger than those found on the surface of the sun. In the new scientific article, Longqing Yi, along with Professor Tünde Fülöp from the Department of Physics, proposed an experiment in which magnetic reconnection can be studied in a new, more precise way. Through the use of grazing incidence of ultra-short laser pulses, the effect can be achieved without overheating the plasma. The process can thus be studied very cleanly, without the laser directly affecting the internal energy of the plasma.

The proposed experiment would therefore allow us to seek answers to some of the most fundamental questions in astrophysics.

The picture shows the experiment setup. The laser (the red triangle on the right) hits the micro-scale film (the grey slab), which splits the beam like a knife. Electrons accelerate on both sides of the 'knife' and produce strong currents, along with extremely strong, anti-parallel magnetic fields. Magnetic reconnection occurs beyond the end of the film (the blue frame). The magnetic field is illustrated with black arrows. The boomerang-like structures illustrate the electrons in the different stages of the simulation. The rainbow colors represent the electrons' transverse momenta.

"We hope that this can inspire many research groups to use our results. This is a great opportunity to look for knowledge that could be useful in a number of areas. For example, we need to better understand solar flares, which can interfere with important communication systems. We also need to be able to control the instabilities caused by magnetic reconnection in fusion devices," says Tünde Fülöp.

The study on which the new results are based was financed by the Knut and Alice Wallenberg foundation, through the framework of the project 'Plasma-based Compact Ion Sources', and the ERC project 'Running away and radiating'.

Contacts and sources:
Joshua Worth
Chalmers University of Technology