A Yale-led research group has created the most detailed maps yet of a vast seedbed of stars similar to Earth's Sun.

The maps provide unprecedented detail of the structure of the Orion A molecular cloud, the closest star-forming region of high-mass stars. Orion A hosts a variety of star-forming environments, including dense star clusters similar to the one where Earth's Sun is believed to have formed.

Gas in the Orion A cloud star-forming region. Each of the three colors (red, green and blue) represents a different velocity range. 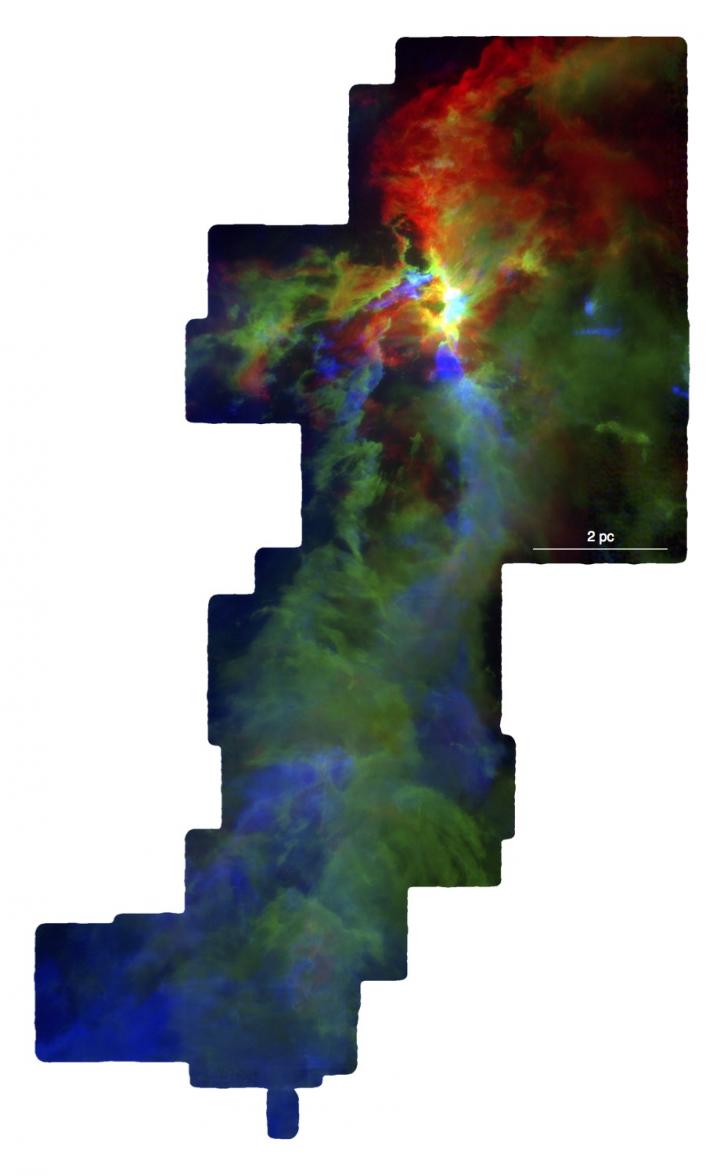 "Our maps probe a wide range of physical scales needed to study how stars form in molecular clouds, and how young stars impact their parent cloud," said Yale postdoctoral associate Shuo Kong, first author of a study about the group's research that appears in the Astrophysical Journal Supplement.

Kong said the team constructed its maps of the Orion A cloud by combining data from a single-dish telescope and an interferometer. The Yale Center for Research Computing assisted in handling the large dataset and producing the images.

The dataset and maps are collectively known as the CARMA-NRO Orion Survey. The name refers to the Combined Array for Research in Millimeter Astronomy (CARMA), an interferometer that was located in California, and the Nobeyama Radio Observatory (NRO) telescope, in Japan.

"Our survey is a unique combination of data from two very different telescopes," said Yale graduate student Jesse Feddersen, a co-author of the study. "We have combined the zoom of CARMA with the wide-angle of NRO to simultaneously capture the details of individual forming stars and the overall shape and motions of the giant molecular cloud."

In addition, the maps will help researchers calibrate star formation models for extragalactic studies. "The data we provide here will benefit research on a broad range of evolutionary stages of the star formation process and on the environment stars form," Arce said.

Yale graduate student María José Maureira is also a co-author of the study.

"The combined observations are a great help for astronomers seeking to understand how fast and efficiently stars form. For example, their maps show the energy released by high-mass stars has a strong impact on the cloud environment," said Glen Langston, program director at the National Science Foundation. The research was supported by the National Science Foundation.