Yellowstone National Park: A Guide to Life on Mars?

A University of Cincinnati geology student is helping NASA determine whether life existed on other planets.

Doctoral candidate Andrew Gangidine is working with UC geology professor Andrew Czaja to develop a marker for ancient bacterial life on Mars. The research could help scientists put to rest one of our most fundamental mysteries.

“We’re trying to answer the question: How rare is life in the universe?” Gangidine said.

Czaja, an assistant professor in UC's McMicken College of Arts and Sciences, serves on a NASA advisory committee that will decide where on Mars to send the next remote-controlled rover. Among other objectives, the rover will look for evidence that life once existed on the red planet. The advisory committee has narrowed the list of landing-site candidates to three and will recommend a finalist later this year. 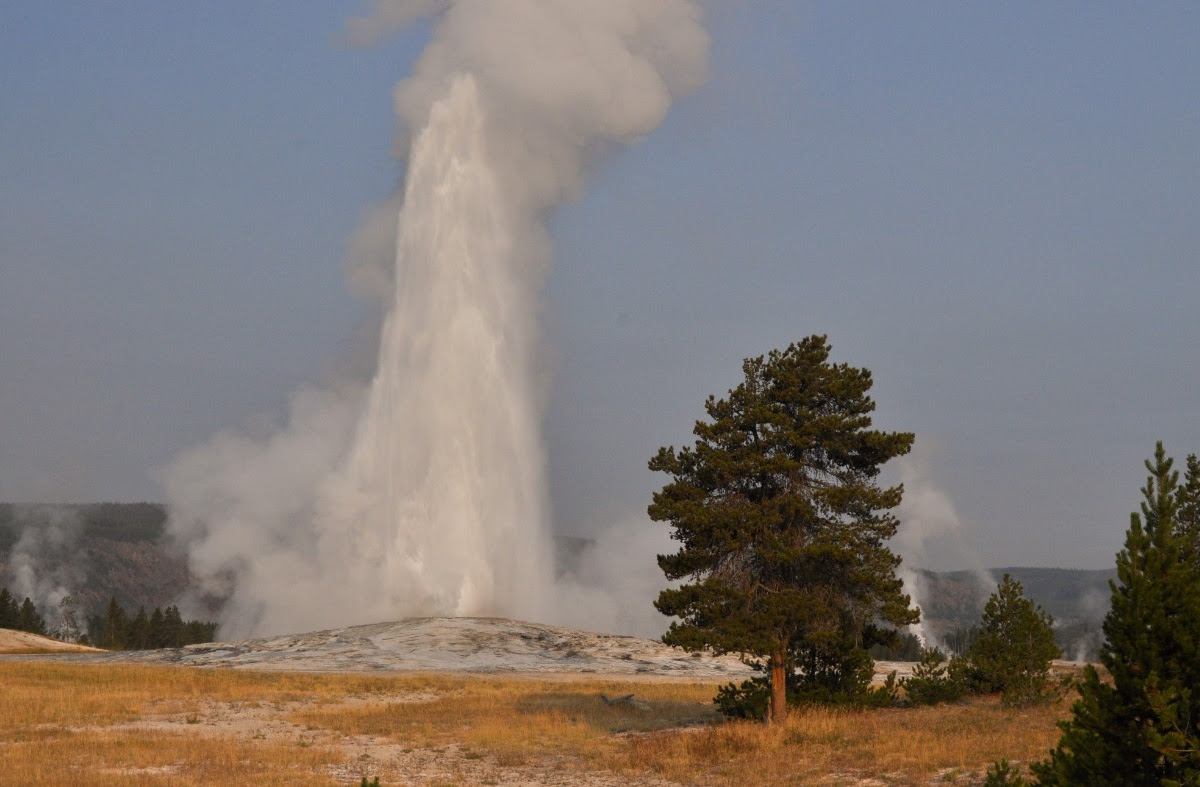 Meanwhile, Gangidine is studying microbial life in silica hot springs to come up with a useful indicator of life on Mars. For the past two years, he has conducted fieldwork in the geyser basins of Wyoming’s Yellowstone National Park to examine what elements are associated with bacteria that live in these geothermal pools.

“We want to remain objective. Some people think there has to be life on Mars,” Gangidine said. “Others think there certainly isn’t life on Mars. And either side has a good chance of being correct. Both have valid arguments. Which is why if we go there and don’t see anything, it won’t be ‘mission fail.’” 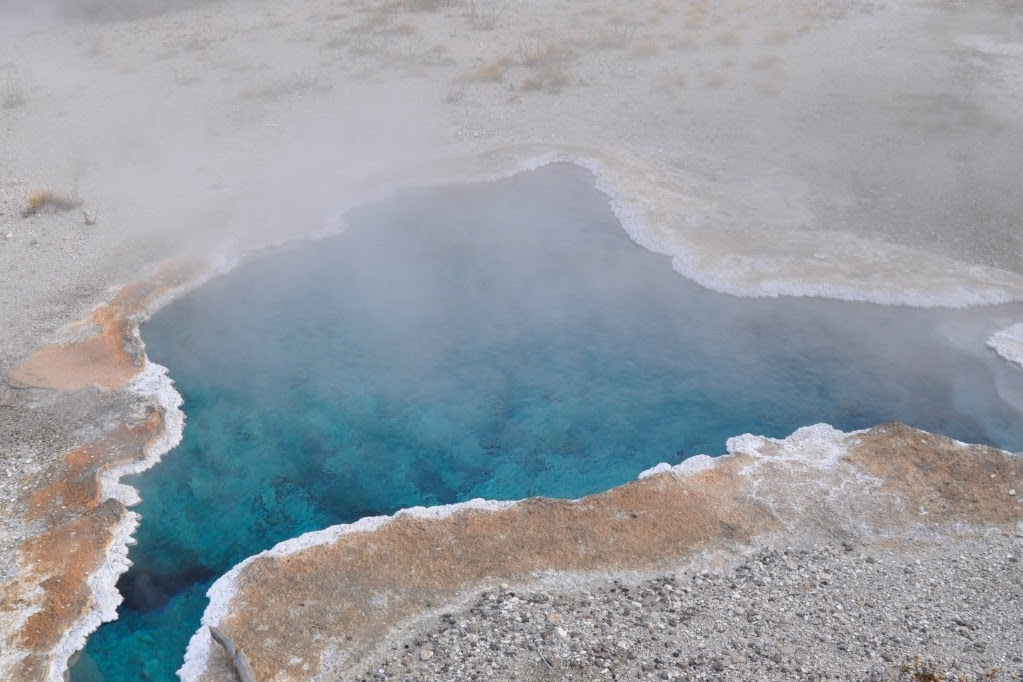 Today, we know that life cannot exist on Mars, at least not on its dry surface. Solar radiation split most of its surface water into its elemental parts nearly 3 billion years ago when the red planet lost its protective magnetic field.

But scientists are debating whether life might exist somewhere deep underground, among pockets of water trapped around geothermal areas similar to Yellowstone’s geysers.

Finding evidence of life on Mars is surprisingly complicated.

If Mars ever sustained life, it’s possible that it was wiped out when most of its atmosphere vanished in the solar wind, Czaja said.

So NASA scientists must be prepared to look for fossil evidence of bacterial life dating back that far. Gangidine said the good news is that similar fossils of early bacterial life more than 3.5 billion years ago have been found on Earth. This makes him optimistic that if similar life ever existed on Mars, NASA has a chance of finding a fossil record of it.

“We can look at life being preserved in these silica deposits today. We have evidence of this happening throughout geologic time,” Gangidine said. “What we’re trying to do is catch fossilization as it happens. What happens to the microbes themselves? And what happens to the trace elements we think are associated with them while they’re alive?”

To unearth clues about ancient life on Mars, geologists look to hot springs such as those found in America’s first national park.

Gangidine and his colleagues need permits to collect samples in the park’s backcountry. But exploring the geyser basins can be tricky and dangerous. A tourist died in 2017 after falling into one of the basin’s boiling pools while hiking off-trail.

“These things really can strip the flesh off your bones,” Gangidine said. “At the bottom of hot springs we study you see skulls of bison and other animals that were unfortunate enough to wander too close.”

Gangidine’s team includes an experienced backcountry field researcher, UC postdoctoral fellow Jeff Havig who is now with the University of Minnesota. They pick their way carefully across the caldera. Sometimes, they can see where a bison’s hoof has broken through the thin crust to reveal steaming mud.

The geology work takes them across “quaking bogs,” a thin layer of peat and grass covering deep shifting mud. Gangidine was walking alongside a colleague on one such hike when he sank above his knees in the treacherous mire.

“Luckily, that place wasn’t super hot. But I was walking just a foot away from someone else. The ground can really change quickly,” he said. “When we go into these settings, we have to be very careful.”

Harvard University geologist T.A. Jaggar Jr. poses next to several brown bears that were asphyxiated by toxic fumes in Yellowstone's Death Gulch in this 1899 photo. Today, animals such as bison occasionally wander into low-lying areas of Yellowstone's geyser basin where they succumb to trapped toxic gases. 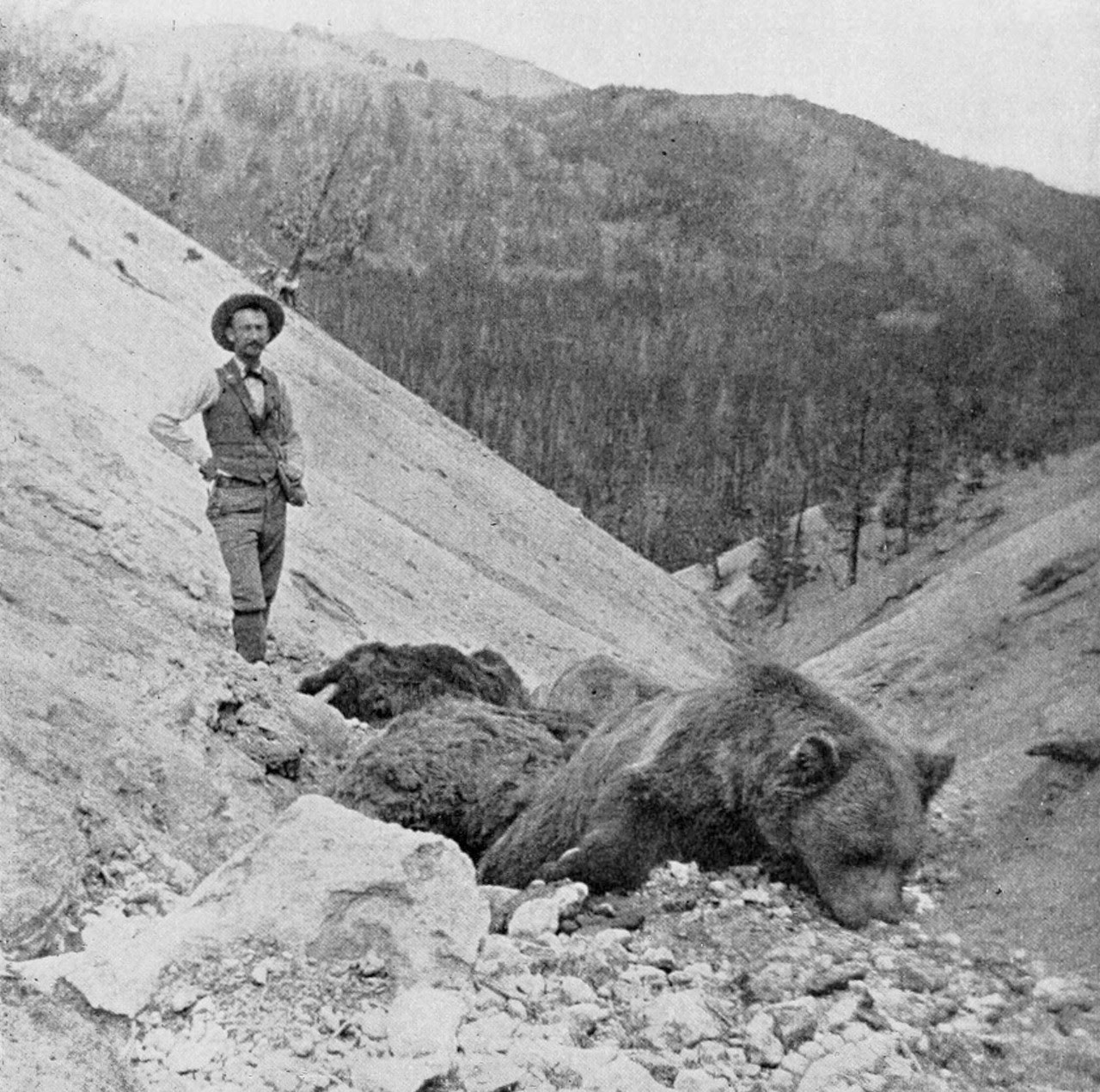 Boiling acid and lava-like mud aren’t the only hazards for researchers in the geyser basins. They also have to be careful not to spend too long around the steam vents, which contain a mix of gases such as carbon dioxide, hydrogen sulfide and methane that can asphyxiate a person under the right conditions.

The U.S. Geological Survey documented this phenomenon in 1888 in part of the park nicknamed “Death Gulch,” a natural depression between two steep hills where toxic gases bubble up from Cache Creek. Harvard University geologist T.A. Jaggar Jr. returned to the area in 1899 and found six bears, an elk and various small animals that died apparently after succumbing to the toxic fumes.

But even in the fresh air, the gas rising from the ground can have a cumulative effect, Gangidine said.


“These hot springs emit a lot of gases you don’t want to breathe in. They bind to the hemoglobin that carries oxygen through your body. Breathing that in, you get very fatigued,” Gangidine said.

“That’s why we try to schedule a day out of the field for every three days we work in the field. If you’re there for four days, you can really feel like a zombie. It’s really hard to think, hard to move.”


A team of geologists stands near one of Yellowstone's famed hot springs. The deep blue color comes from the scattered light of the sun passing through the clear water. 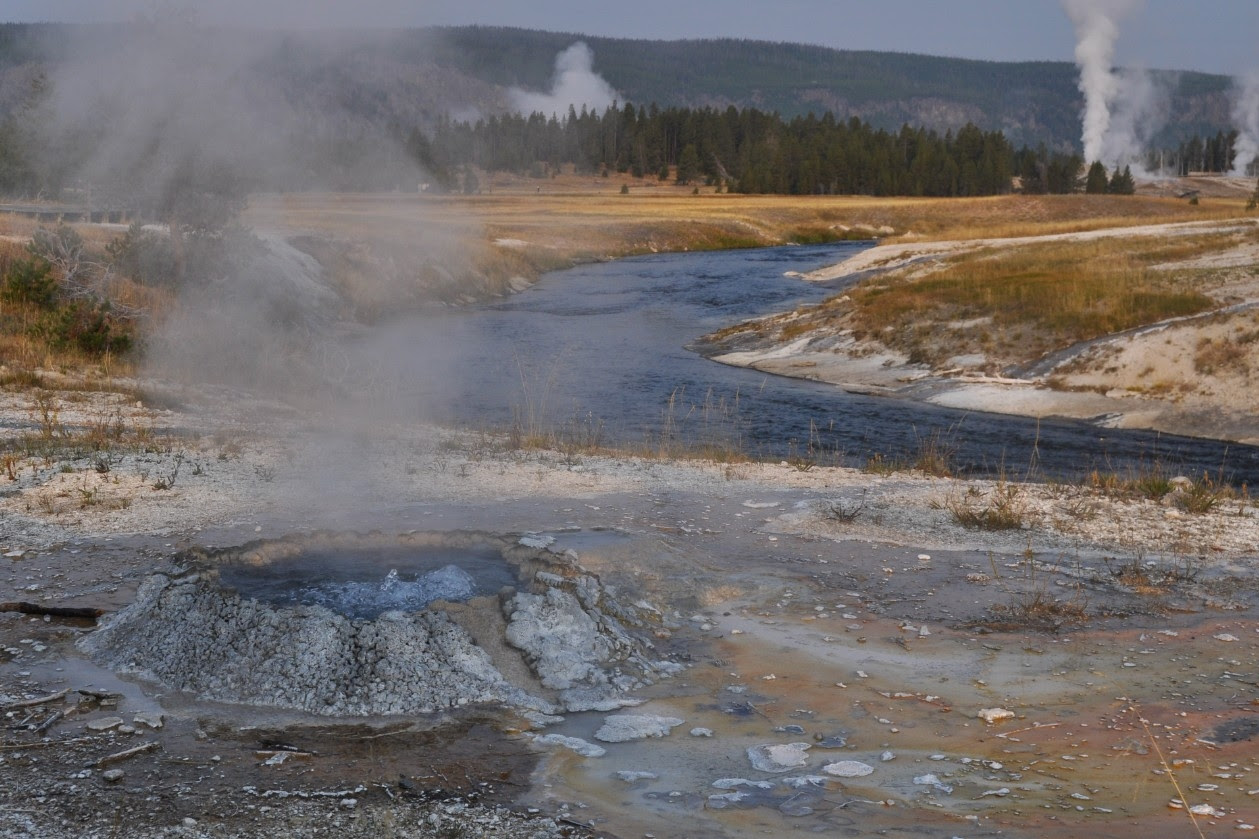 
As a biology undergraduate at UC, Gangidine worked with UC biology professor Dennis Grogan to examine microbial life called extremophiles that live in hostile places such as Yellowstone’s acidic or alkaline hot springs. Now as a geologist, Gangidine is studying the fossils these hardy single-celled creatures leave behind.

“Hot springs make silica deposits that preserve life really well,” Gangidine said. “When left exposed on a planet’s surface, it doesn’t crystallize and doesn’t metamorphose. So these samples should be relatively well preserved if we find them.”

In UC professor Czaja’s geology lab, Gangidine peers through a microscope at slides he prepared from chunks of Yellowstone silica he took from a mountainous steam cone geyser.


The bacterial filaments from samples taken at the top of the geyser are full of color. But the older samples, some perhaps thousands of years old, are colorless, even if they hold their shape. So for more clues about this basic form of life, Gangidine subjects the bacterial samples to elemental analysis using a secondary ion mass spectrometer. The analysis renders the elements in vivid color: deep yellows, reds and greens representing chromium or gallium perhaps associated with the bacterial life.

If Gangidine finds a correlation between the concentrations and spatial distributions of particular elements and the bacteria, it might serve as a biosignature that scientists can use to identify past life on Mars.

“The reason we chose gallium is it’s not known to be associated with life. But when we look at the fossilized bacterial samples, we find it, so there must be something going on,” Gangidine said. “Do the bacteria store certain elements preferentially as opposed to what you would find elsewhere in these rocks?”

Spectroscopy reveals elements such as gallium in a bacterial sample taken from silica in Yellowstone National Park. Gangidine is working with researchers in Australia, home to some of the world’s oldest fossils, some dating back 3.5 billion years.

“If I want to create a biosignature, I have to prove that it persists throughout time,” Gangidine said. “It exists in these relatively younger samples. But does it exist in these ancient samples, too? That will be crucial to figure out.”

Gangidine also plans to build an artificial hot spring in a lab aquarium using similar elements found in geysers. By introducing a super-saturation to the water, the excess silica will precipitate much the same way it does in nature. Then he can add trace chemicals associated with life and study what happens in a miniature world absent of life.

“To prove we found a biosignature, we have to prove the signature doesn’t occur without life,” he said.

“Gallium is the one we were surprised by,” Czaja said. “It is associated with silica near the bacteria but isn’t in the bacteria.”

Like Gangidine, Czaja got his start in the sciences by studying biology before pursuing a career in paleontology.

Czaja’s NASA advisory committee will meet in October to decide where on Mars they would like to send the rover among the three preferred destinations. The rover is tentatively slated for launch in July or August of 2020, arriving on Mars about seven months later.

“NASA tends to like to go new places to push the frontier. Geologists like to go back to the same places over and over to ask new questions,” Czaja said.

The rover will collect samples in sealed containers for shipping back to Earth in a later mission. So it could be many years before geologists such as Czaja and Gangidine know whether their hunches about where best to look for life on Mars were correct.

Helping to frame a question that you may never live to see answered is one of science’s most selfless pursuits, Czaja said.

“One thing I like about these NASA missions is the long-term thinking and planning,” he said. “People working on these projects now may never see the results. But they’re still willing to put in the work because it’s such a fascinating question.”

UC student Andrew Gangidine is looking for an elemental marker that could help NASA identify ancient life on Mars during its upcoming Mars 2020 mission.


Yellowstone National Park in Wyoming is home to one of the world's most active geothermal areas, featuring mud pots, erupting geysers and boiling springs like this one. 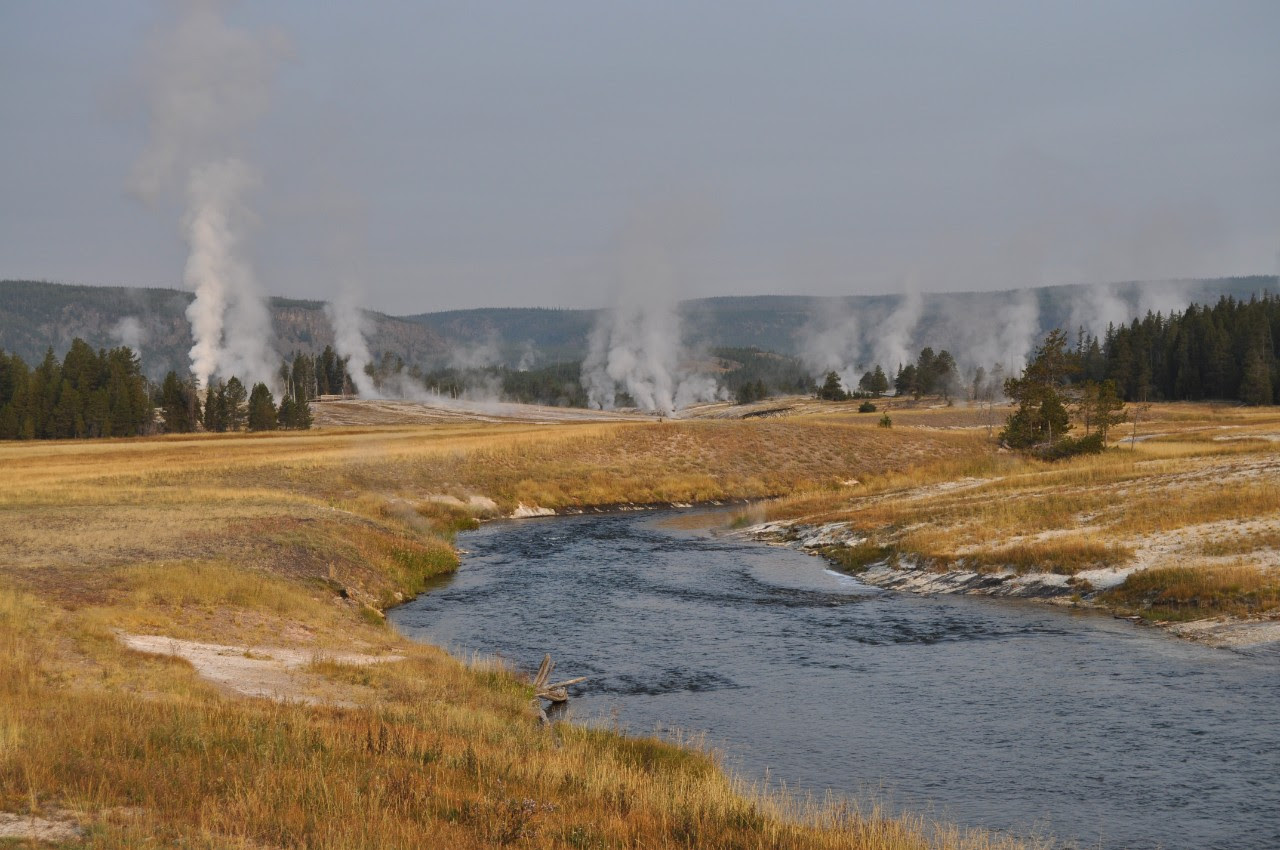 
The Mars 2020 mission will not be a failure if scientists find no evidence of life. Quite the contrary, Gangidine said.

“If we find it, we can say maybe life is not that rare among planets,” Gangidine said. “But if we don’t find life in places that would be the most ideal and best preserved candidates, then maybe life is pretty rare.”

But if NASA does find evidence of life on Mars, that might suggest that sparking life from a primordial soup isn’t so extraordinary after all. And the first question will be how life on Mars compares to life on Earth, Czaja said. Was there a common ancestor?

Any claim about the existence or absence of life on Mars will be subjected to worldwide scrutiny and skepticism. Czaja said researchers must be prepared to provide a wealth of evidence to fortify their findings.

“It’s not nearly enough to find something that looks like a bacterial cell,” Czaja said. “There are nonbiological things that could look like that. But if you have a cascade of traits — this and this and this added together — it’s hard to explain it any other way except for life.”