Wow! Now We See How Cells Behave In 3D and Real Time inside Living Organisms with Amazing Clarity (Videos and Photos)

An immune cell crawls around the inner ear of a zebrafish. 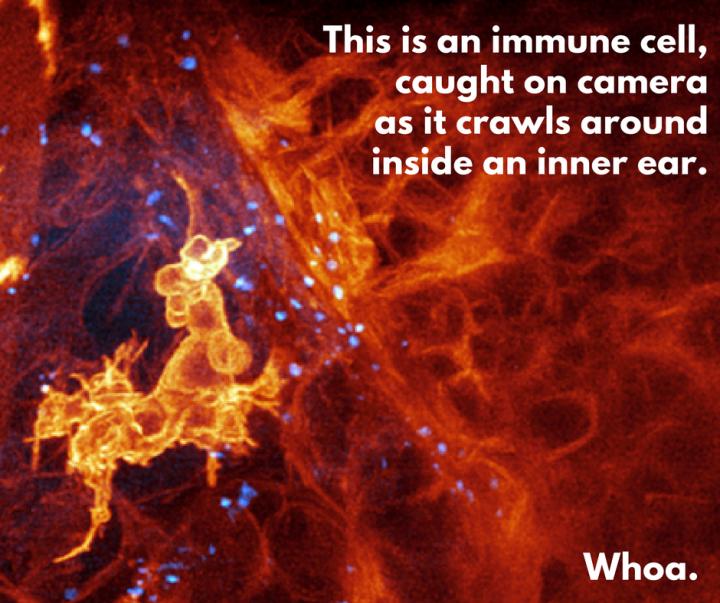 Merging lattice light sheet microscopy with adaptive optics reveals the most detailed picture yet of subcellular dynamics in multicellular organisms.

An immune cell migrates through a zebrafish's inner ear while scooping up particles of sugar (blue) along the way.

Astronomers developed a “guide star” adaptive optics technique to obtain the most crystal-clear and precise telescopic images of distant galaxies, stars and planets. Now a team of scientists, led by Nobel laureate Eric Betzig, PhD, are borrowing the very same trick. They’ve combined it with lattice light-sheet to create a new microscope that’s able to capture real-time, incredibly detailed and accurate images, along with three-dimensional videos of biology on the cellular and sub-cellular level.

The work — a collaboration between researchers at Howard Hughes Medical Institute, Boston Children’s Hospital and Harvard Medical School — is detailed in a new paper just published in Science.

“For the first time, we are seeing life itself at all levels inside whole, living organisms,” said Tom Kirchhausen, PhD, co-author on the new study, who is a senior investigator in the Program in Cellular and Molecular Medicine at Boston Children’s Hospital and a professor of cell biology and pediatrics at Harvard Medical School (HMS).

A new microscope allows us to see how cells behave in 3D and real time inside living organisms.

“Every time we’ve done an experiment with this microscope, we’ve observed something novel — and generated new ideas and hypotheses to test,” Kirchhausen said in a news story by HMS. “It can be used to study almost any problem in a biological system or organism I can think of.”
Seeing is believing: Here’s what the new microscope can do

So far, the team has been taking a close look at developing zebrafish because the fish have translucent skin, making it easy to capture microscopic images of their organs and tissues in vivo.

Co-first author on the study, Gokul Upadhyayula, PhD, an instructor in pediatrics at Boston Children’s and HMS, explained that zebrafish can be genetically modified so that human disease models can be studied. Already, the team has used the microscope to watch metastatic human breast cancer cells move around inside a zebrafish, revealing new insights into how cancer spreads through living tissues.

A human breast cancer cell (green) is seen escaping from a blood vessel into the surrounding tissue.

Our window into the cellular world just got a whole lot clearer.

Here are neural progenitor cells from a region in the developing brain of a zebrafish embryo. The cells are expressing different colored fluorescent markers that reveal the spatial distribution of sub-cellular organelles. The cells are expressing markers for organelles including: cell membrane (grey), the Golgi apparatus (neon green), endoplasmic reticulum (magenta) and mitochondria (aqua). Although this image was taken of a whole, living zebrafish, the image was then computationally separated to allow better analysis of how each individual cell is composed.

Scientists have imaged living cells with microscopes for hundreds of years, but the sharpest views have come from cells isolated on glass slides. The large groups of cells inside whole organisms scramble light like a bagful of marbles, Betzig says. “This raises the nagging doubt that we are not seeing cells in their native state, happily ensconced in the organism in which they evolved.”

Even when viewing cells individually, the microscopes most commonly used to study cellular inner workings are usually too slow to follow the action in 3-D. These microscopes bathe cells with light thousands to millions of times more intense than the desert sun, Betzig says. “This also contributes to our fear that we are not seeing cells in their natural, unstressed form.

“It’s often said that seeing is believing, but when it comes to cell biology, I think the more appropriate question is, ‘When can we believe what we see?’” he adds.

The new microscope is essentially three microscopes in one: an adaptive optical system to maintain the thin illumination of a lattice light sheet as it penetrates within an organism, and another adaptive optical system to create distortion-free images when looking down on the illuminated plane from above. By shining a laser through either pathway, the researchers create a bright point of light within the region they wish to image. The distortions in the image of this “guide star” tell the team the nature of the optical aberrations along either pathway. The researchers can correct these distortions by applying equal but opposite distortions to a pixelated light modulator on the excitation side, and a deformable mirror on detection. Over large volumes, the distortions change as the light traverses different tissues. In this case, the team assembles large 3-D images from a series of subvolumes, each with its own independent excitation and detection corrections.

The results offer an electrifying new look at biology, and reveal a bustling metropolis in action at the subcellular level. In one movie from the microscope, a fiery orange immune cell wriggles madly through a zebrafish’s ear while scooping up blue sugar particles along the way. In another, a cancer cell trails sticky appendages as it rolls through a blood vessel and attempts to gain purchase on the vessel wall.

An immune cell is captured through lattice-light sheet microscopy, a technique that has allowed scientists an unprecedented view of living biology inside whole organisms. The immune cell is seen crawling around inside the inner ear of a zebrafish, where it was observed frequently changing its speed and direction.

This image shows all the individual cells across a whole zebrafish eye. The cells have been computationally separated to allow better examination of each individual cell. The sub-cellular organelles are visible through fluorescent markers. The cell membranes appear in aqua, the Golgi apparatus are neon green, the endoplasmic reticula are magenta and the mitochondria are orange.


Here, zebrafish muscle fibers are imaged and computationally separated to make each cell and its contents visible.


VIDEO: Kirchhausen and Upadhyayula describe their work and show some of the amazing images and 3D videos they’ve been able to capture with the microscope.
Credit: Richard Groleau/Kevin Jiang/Harvard Medical School.

According to an HHMI press release, Betzig believes that adaptive optics is one of the most important areas in microscopy research today, and the lattice-light-sheet microscope, which excels at 3-D live imaging, is the perfect platform to showcase its power.

Without adaptive optics, sub-cellular microscopy is “just too damn fuzzy.”

The complexity of the 3-D multicellular environment can be overwhelming, Betzig says, but the clarity of his team’s imaging permits them to computationally “explode” the individual cells in tissue to focus on the dynamics within any particular one, such as the remodeling of internal organelles during cell division.

All this detail is hard to see without adaptive optics, Betzig says. “It’s just too damn fuzzy.” In his view, adaptive optics is one of the most important areas in microscopy research today, and the lattice light sheet microscope, which excels at 3-D live imaging, is the perfect platform to showcase its power. Adaptive optics hasn’t really taken off yet, he says, because the technology has been complicated, expensive, and until now, not clearly worth the effort. But within 10 years, Betzig predicts, biologists everywhere will be on board.

The next big step is making that technology affordable and user-friendly. “Technical demonstrations and publications don’t amount to a hill of beans. The only metric by which a microscope should be judged is how many people use it, and the significance of what they discover with it,” Betzig says.

The current microscope fills a 10-foot-long table. “It’s a bit of a Frankenstein’s monster right now,” says Betzig, who is moving to the University of California, Berkeley, in the fall. His team is working on a next-generation version that should fit on a small desk at a cost within the reach of individual labs. The first such instrument will go to Janelia’s Advanced Imaging Center, where scientists from around the world can apply to use it. Plans that scientists can use to create their own microscopes will also be made freely available. Ultimately, Betzig hopes that the adaptive optical version of the lattice microscope will be commercialized, as was the base lattice instrument before it. That could bring adaptive optics into the mainstream.

“If you really want to understand the cell in vivo, and image it with the quality possible in vitro, this is the price of admission,” he says.
Additional authors on the paper are researchers from Stony Brook University, University of California, Berkeley, California Institute of Technology and the University of Exeter.