Experts at the Alfred Wegener Institute, Helmholtz Centre for Polar and Marine Research (AWI) have recently found higher amounts of microplastic in arctic sea ice than ever before. However, the majority of particles were microscopically small.

The ice samples from five regions throughout the Arctic Ocean contained up to 12,000 microplastic particles per litre of sea ice. Further, the different types of plastic showed a unique footprint in the ice allowing the researchers to trace them back to possible sources. This involves the massive garbage patch in the Pacific Ocean, while in turn, the high percentage of paint and nylon particles pointed to the intensified shipping and fishing activities in some parts of the Arctic Ocean.

The new study has just been released in the journal Nature Communications.

An AWI scientist is preparing an Arctic sea-ice core for a microplastic analysis in a lab at the AWI Helgoland. 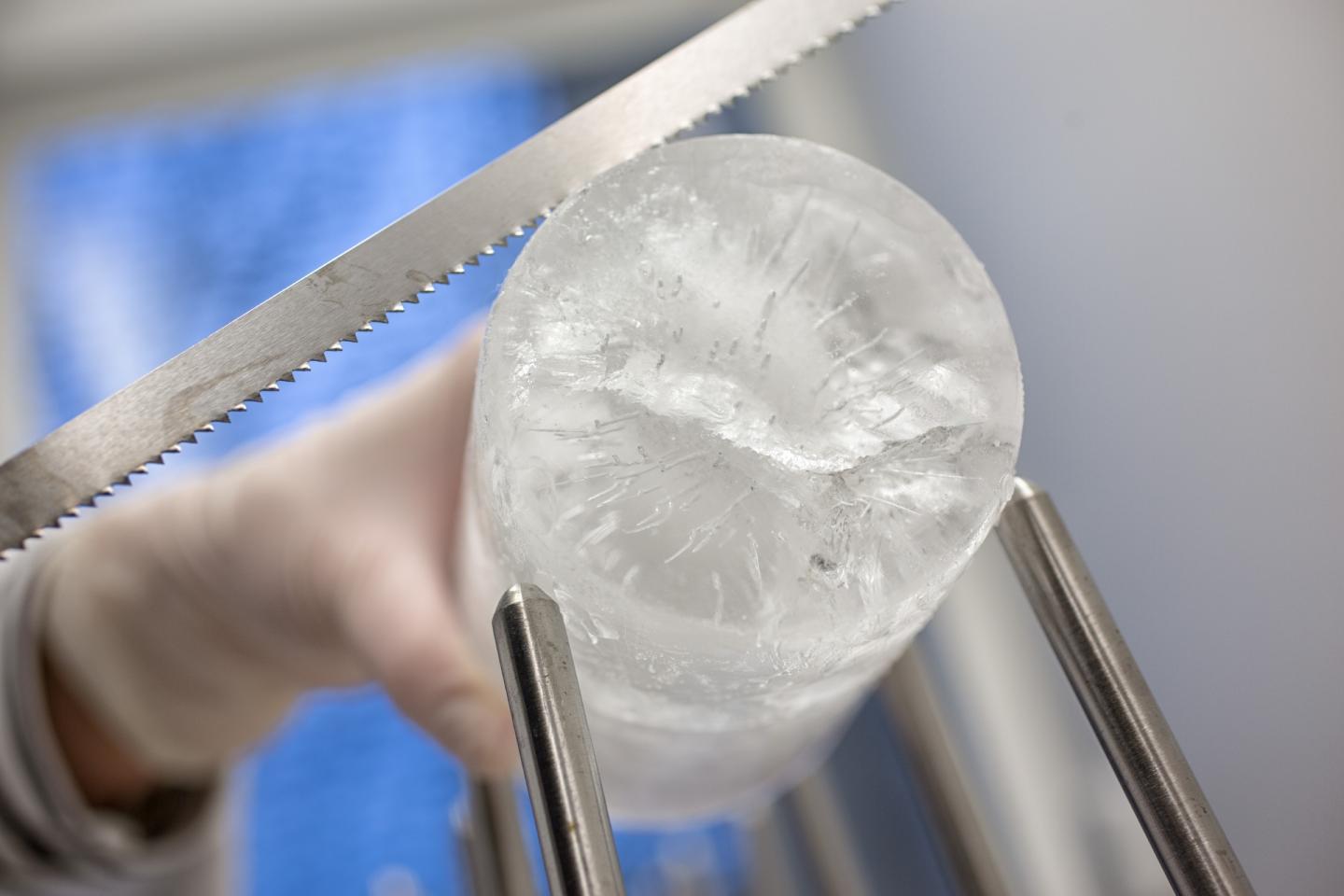 "During our work, we realised that more than half of the microplastic particles trapped in the ice were less than a twentieth of a millimetre wide, which means they could easily be ingested by arctic microorganisms like ciliates, but also by copepods," says AWI biologist and first author Dr Ilka Peeken. The observation is a very troubling one because, as she explains, "No one can say for certain how harmful these tiny plastic particles are for marine life, or ultimately also for human beings."

The AWI researcher team had gathered the ice samples in the course of three expeditions to the Arctic Ocean on board the research icebreaker Polarstern in the spring of 2014 and summer of 2015. They hail from five regions along the Transpolar Drift and the Fram Strait, which transports sea ice from the Central Arctic to the North Atlantic.

The term microplastic refers to plastic particles, fibres, pellets and other fragments with a length, width or diameter ranging from only a few micrometres - thousandths of a millimetre - to under five millimetres. A considerable amount of microplastic is released directly into the ocean by the gradual deterioration of larger pieces of plastic. But microplastic can also be created on land - e.g. by laundering synthetic textiles or abrasion of car tyres, which initially floats through the air as dust, and is then blown to the ocean by the wind, or finds its way there through sewer networks.

Germany's research icebreaker POLARSTERN above the Lomonossov Ridge in the central Arctic Ocean. 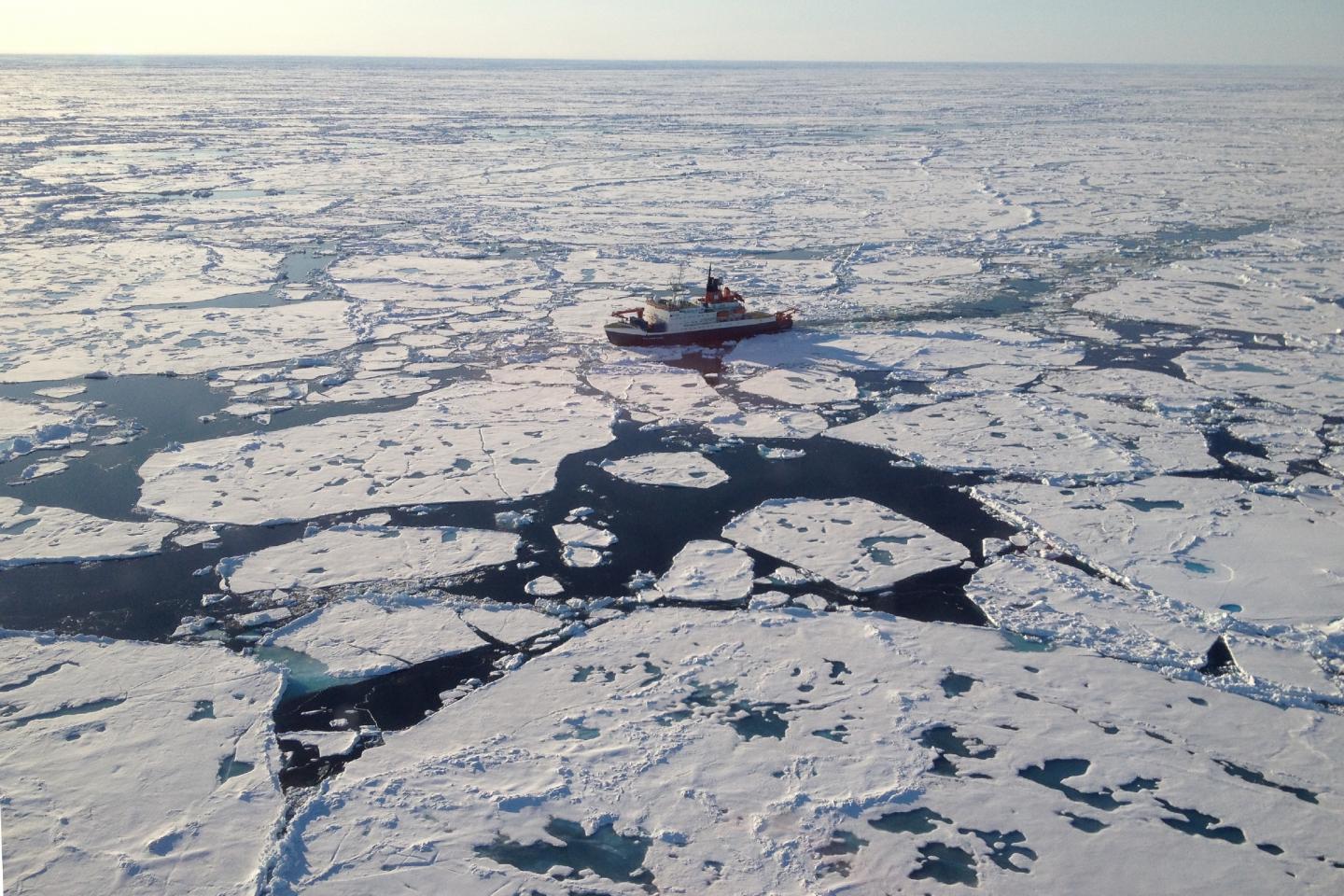 In order to determine the exact amount and distribution of microplastic in the sea ice, the AWI researchers were the first to analyse the ice cores layer by layer using a Fourier Transform Infrared Spectrometer (FTIR), a device that bombards microparticles with infrared light and uses a special mathematical method to analyse the radiation they reflect back. Depending on their makeup, the particles absorb and reflect different wavelengths, allowing every substance to be identified by its optic fingerprint.

"Using this approach, we also discovered plastic particles that were only 11 micrometres across. That's roughly one-sixth the diameter of a human hair, and also explains why we found concentrations of over 12,000 particles per litre of sea ice - which is two to three time higher than what we'd found in past measurements," says Gunnar Gerdts, in whose laboratory the measurements were carried out. Surprisingly, the researchers found that 67 percent of the particles detected in the ice belonged to the smallest-scale category "50 micrometres and smaller".

The particle density and composition varied significantly from sample to sample. At the same time, the researchers determined that the plastic particles were not uniformly distributed throughout the ice core. "We traced back the journey of the ice floes we sampled and can now safely say that both the region in which the sea ice is initially formed and the water masses in which the floes drift through the Arctic while growing, have an enormous influence on the composition and layering of the encased plastic particles," relates Ilka Peeken.

The team of researchers also learned e.g. that ice floes, which are driven in the pacific water masses of the Canadian Basin, contain particularly high concentrations of polyethylene particles. Polyethylene is above all used in packaging material. As the experts write in their study, "Accordingly, we assume that these fragments represent remains of the so-called Great Pacific Garbage Patch and are pushed along the Bering Strait and into the Arctic Ocean by the Pacific inflow."

In contrast, the scientists predominantly found paint particles from ship's paint and nylon waste from fishing nets in ice from the shallow marginal seas of Siberia. "These findings suggest that both the expanding shipping and fishing activities in the Arctic are leaving their mark. The high microplastic concentrations in the sea ice can thus not only be attributed to sources outside the Arctic Ocean. Instead, they also point to local pollution in the Arctic," says Ilka Peeken.

The researchers found a total of 17 different types of plastic in the sea ice, including packaging materials like polyethylene and polypropylene, but also paints, nylon, polyester, and cellulose acetate, the latter is primarily used in the manufacture of cigarette filters. Taken together, these six materials accounted for roughly half of all the microplastic particles detected.

According to Ilka Peeken, "The sea ice binds all this plastic litter for two to a maximum of eleven years - the time it takes for ice floes from the marginal seas of Siberia or the North American Arctic to reach the Fram Strait, where they melt." But conversely, this also means that sea ice transports large quantities of microplastic to the waters off the northeast coast of Greenland.

The researchers can't yet say whether the released plastic particles subsequently remain in the Arctic or are transported farther south; in fact, it seems likely that the plastic litter begins sinking into deeper waters relatively quickly. "Free-floating microplastic particles are often colonized by bacteria and algae, which makes them heavier and heavier. Sometimes they clump together with algae, which makes them drift down to the seafloor much faster," explains AWI biologist and co-author Dr Melanie Bergmann.

The observations made by researchers at the AWI's deep-sea network HAUSGARTEN in the Fram Strait lend additional weight to this thesis. As Melanie Bergmann relates, "We recently recorded microplastic concentrations of up to 6500 plastic particles per kilogram of seafloor; those are extremely high values."