Researchers from Tomsk Polytechnic University together with their international colleagues have discovered a method to modify and use the one-atom thin conductor of current and heat, graphene without destroying it.

Thanks to the novel method, the researchers were able to synthesize on single-layer graphene a well-structured polymer with a strong covalent bond, which they called 'polymer carpets'. The entire structure is highly stable; it is less prone to degradation over time that makes the study promising for the development of flexible organic electronics. Also, if a layer of molybdenum disulfide is added over the 'nanocarpet', the resulting structure generates current under exposure to light. The study results were published in Journal of Materials Chemistry C.

This is the scheme for obtaining a hybrid structure of 'graphene-polymer'. 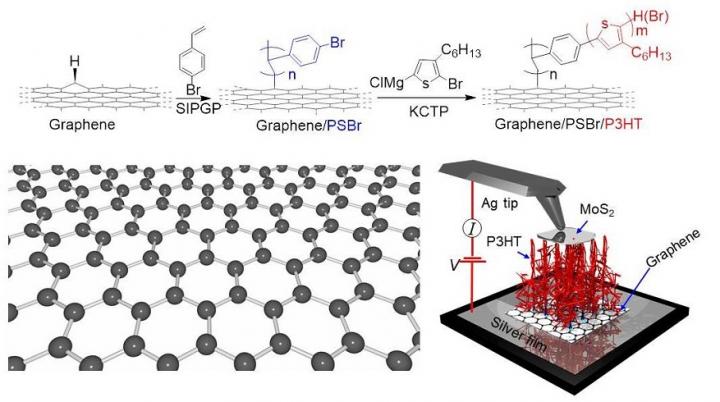 Graphene is simultaneously the most durable, light and an electrically conductive carbon material. It can be used for manufacturing solar batteries, smartphone screens, thin and flexible electronics, and even in water filters since graphene films pass water molecules and stop all other compounds. Graphene should be integrated into complex structures to be used successfully. However, it is a challenge to do that. According to scientists, graphene itself is stable enough and reacts poorly with other compounds. In order to make it react with other elements, i.e. to modify it, graphene is usually at least partially destroyed. This modification degrades the properties of the materials obtained.

Professor Raul D. Rodriguez from the Research School for Chemistry & Applied Biomedical Sciences says: 'When functionalizing graphene, you should be very careful. If you overdo it, the unique properties of graphene are lost. Therefore, we decided to follow a different path.

In graphene, there are inevitable nanodefects, for example, at the edges of graphene and wrinkles in the plane. Hydrogen atoms are often attached to such defects. It is this hydrogen that can interact with other chemicals.'

To modify graphene, the authors use a thin metal substrate on which a graphene single-layer is placed. Then graphene is covered with a solution of bromine-polystyrene molecules. The molecules interact with hydrogen and are attached to the existing defects, resulting in polyhexylthiophene (P3HT). Further exposed to light during the photocatalysis, a polymer begins to 'grow'.

'In the result, we obtained the samples which structure resembles 'polymer carpets' as we call them in the paper. Above such a 'polymer carpet' we place molybdenum disulfide. Due to a unique combination of materials, we obtain a 'sandwich' structure' that functions like a solar battery. That is, it generates current when exposed to light. In our experiments a strong covalent bond is established between the molecules of the polymer and graphene, that is critical for the stability of the material obtained,' notes Rodriguez.

According to the researcher, the method for graphene modification, on the one hand, enables obtaining a very sturdy compound; on the other hand, it is rather simple and cheap as affordable materials are used. The method is versatile because it makes growing very different polymers directly on graphene possible.

'The strength of the obtained hybrid material is achieved additionally because we do not destroy graphene itself but use pre-existing defects, and a strong covalent bond to polymer molecules. This allows us to consider the study as promising for the development of thin and flexible electronics when solar batteries can be attached to clothes, and when deformed they will not break,' the professor explains.