October 7, 2008: The Day It Rained Diamonds from a Doomed Planet on the Nubian Desert

Using transmission electron microscopy, EPFL scientists have examined a slice from a meteorite that contains large diamonds formed at high pressure. The study shows that the parent body from which the meteorite came was a planetary embryo of a size between Mercury to Mars. The discovery is published in Nature Communications.

On October 7, 2008, an asteroid entered Earth’s atmosphere and exploded 37 km above the Nubian Desert in Sudan. The asteroid, now known as “2008 TC3”, was just over four meters in diameter. When it exploded in the atmosphere, it scattered multiple fragments across the desert. Only fifty fragments, ranging in size from 1–10 cm, were collected, for a total mass of 4.5 kg. Over time, the fragments were gathered and catalogued for study into a collection named Almahata Sitta (Arabic for “Station Six”, after a nearby train station between Wadi Halfa and Khartoum). 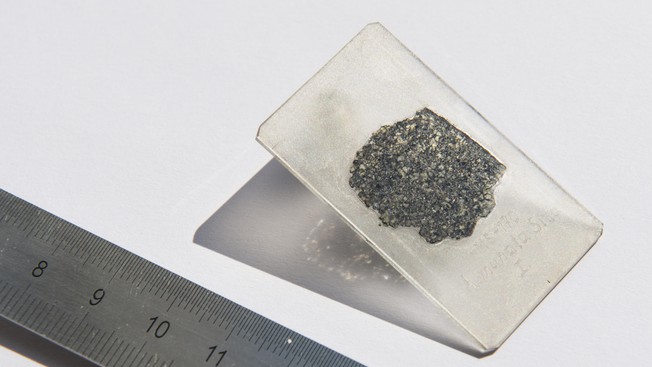 The Almahata Sitta meteorites are mostly ureilites, a rare type of stony meteorite that often contains clusters of nano-sized diamonds. Current thinking is that these tiny diamonds can form in three ways: enormous pressure shockwaves from high-energy collisions between the meteorite “parent body” and other space objects; deposition by chemical vapor; or, finally, the “normal” static pressure inside the parent body, like most diamonds on Earth.

The unanswered question, so far, has been the planetary origin of 2008 TC3 ureilites. Now, scientists at Philippe Gillet’s lab at EPFL, with colleagues in France and Germany, have studied large diamonds (100-microns in diameter) in some of the Almahata Sitta meteorites and discovered that the asteroid came from a planetary “embryo” whose size is between Mercury to Mars.

The researchers studied the diamond samples using a combination of advanced transmission electron microscopy techniques at EPFL’s Interdisciplinary Centre for Electron Microscopy. The analysis of the data showed that the diamonds had chromite, phosphate, and iron-nickel sulfides embedded in them – what scientists refer to as “inclusions”. These have been known for a long time to exist inside Earth’s diamonds, but are now described for the first time in an extraterrestrial body.o
The particular composition and morphology of these materials can only be explained if the pressure under which the diamonds were formed was higher than 20 GPa (giga-Pascals, the unit of pressure). This level of internal pressure can only be explained if the planetary parent body was a Mercury- to Mars-sized planetary “embryo”, depending on the layer in which the diamonds were formed.

Many planetary formation models have predicted that these planetary embryos existed in the first million years of our solar system, and the study offers compelling evidence for their existence. Many planetary embryos were Mars-sized bodies, such as the one that collided with Earth to give rise to the Moon. Other of these went on to form larger planets, or collided with the Sun or were ejected from the solar system altogether. The authors write “This study provides convincing evidence that the ureilite parent body was one such large ‘lost’ planet before it was destroyed by collisions some 4.5 billion years ago.”