New Way of Exploring the Afterglow from the Big Bang Found

Researchers have developed a new way to improve our knowledge of the Big Bang by measuring radiation from its afterglow, called the cosmic microwave background radiation. The new results predict the maximum bandwidth of the universe, which is the maximum speed at which any change can occur in the universe.

The cosmic microwave background (CMB) is a reverberation or afterglow left from when the universe was about 300,000 years old. It was first discovered in 1964 as a ubiquitous faint noise in radio antennas. In the past two decades, satellite-based telescopes have started to measure it with great accuracy, revolutionizing our understanding of the Big Bang.

The detailed, all-sky picture of the infant universe created from nine years of WMAP data. The image reveals 13.77 billion year old temperature fluctuations (shown as color differences) that correspond to the seeds that grew to become the galaxies in the cosmic microwave background (CMB). The signal from our galaxy was subtracted using the multi-frequency data. This image shows a temperature range of ± 200 microKelvin. 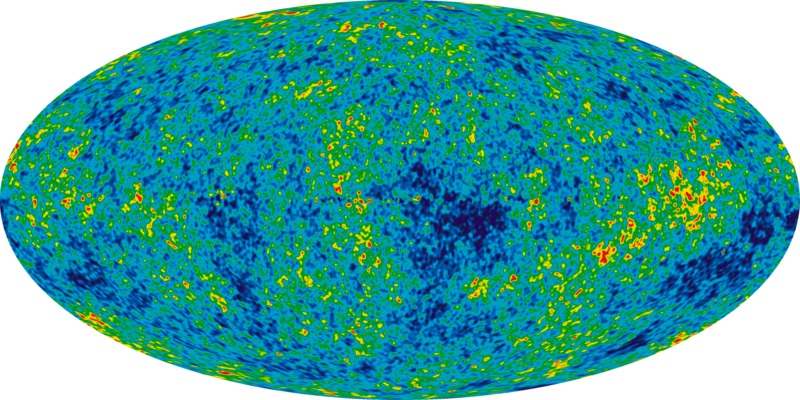 Achim Kempf, a professor of applied mathematics at the University of Waterloo and Canada Research Chair in the Physics of Information, led the work to develop the new calculation, jointly with Aidan Chatwin-Davies and Robert Martin, his former graduate students at Waterloo.

The study appears in a special issue of Foundations of Physics dedicated to the material Kempf presentedto the Vatican Observatory in Rome last year. The international workshop entitled, Black Holes, Gravitational Waves and Spacetime Singularities, gathered 25 leading physicists from around the world to present, collaborate and inform on the latest theoretical progress and experimental data on the Big Bang. Kempf’s invitation was the result of this paper in Physical Review Letters, a leading journal in the field.

“This kind of work is highly collaborative,” said Kempf, also an affiliate at the Perimeter Institute for Theoretical Physics. “It was great to see at the conference how experimentalists and theoreticians inspire each other’s work.”

While at the Vatican, Kempf and other researchers in attendance also shared their work with the Pope.

“The Pope has a great sense of humor and had a good laugh with us on the subject of dark matter,” said Kempf.

Teams of astronomers are currently working on even more accurate measurements of the cosmic microwave background. By using the new calculations, these upcoming measurements might reveal the value of the universe’s fundamental bandwidth, thereby telling us also about the fastest thing that ever happened, the Big Bang.

Contacts and sources:
Pamela Smyth
University of Waterloo
on April 20, 2018