Southwest Research Institute scientists posit a violent birth of the tiny Martian moons Phobos and Deimos, but on a much smaller scale than the giant impact thought to have resulted in the Earth-Moon system. Their work shows that an impact between proto-Mars and a dwarf-planet-sized object likely produced the two moons, as detailed in a paper published today in Science Advances.

The origin of the Red Planet’s small moons has been debated for decades. The question is whether the bodies were asteroids captured intact by Mars gravity or whether the tiny satellites formed from an equatorial disk of debris, as is most consistent with their nearly circular and co-planar orbits. The production of a disk by an impact with Mars seemed promising, but prior models of this process were limited by low numerical resolution and overly simplified modeling techniques.

“Ours is the first self-consistent model to identify the type of impact needed to lead to the formation of Mars’ two small moons,” said lead author Dr. Robin Canup, an associate vice president in the SwRI Space Science and Engineering Division. Canup is one of the leading scientists using large-scale hydrodynamical simulations to model planet-scale collisions, including the prevailing Earth-Moon formation model.

SwRI scientists modeled a Ceres-sized object crashing into Mars at an oblique angle. These four frames from the 3-D simulation show that the impact initially produces a disk of orbiting debris primarily derived from Mars (bottom right frame). The outer portions of the disk later accumulate into Mars’ small moons, Phobos and Deimos. The inner portions of the disk accumulate into larger moons that eventually spiral inward and are assimilated into Mars. 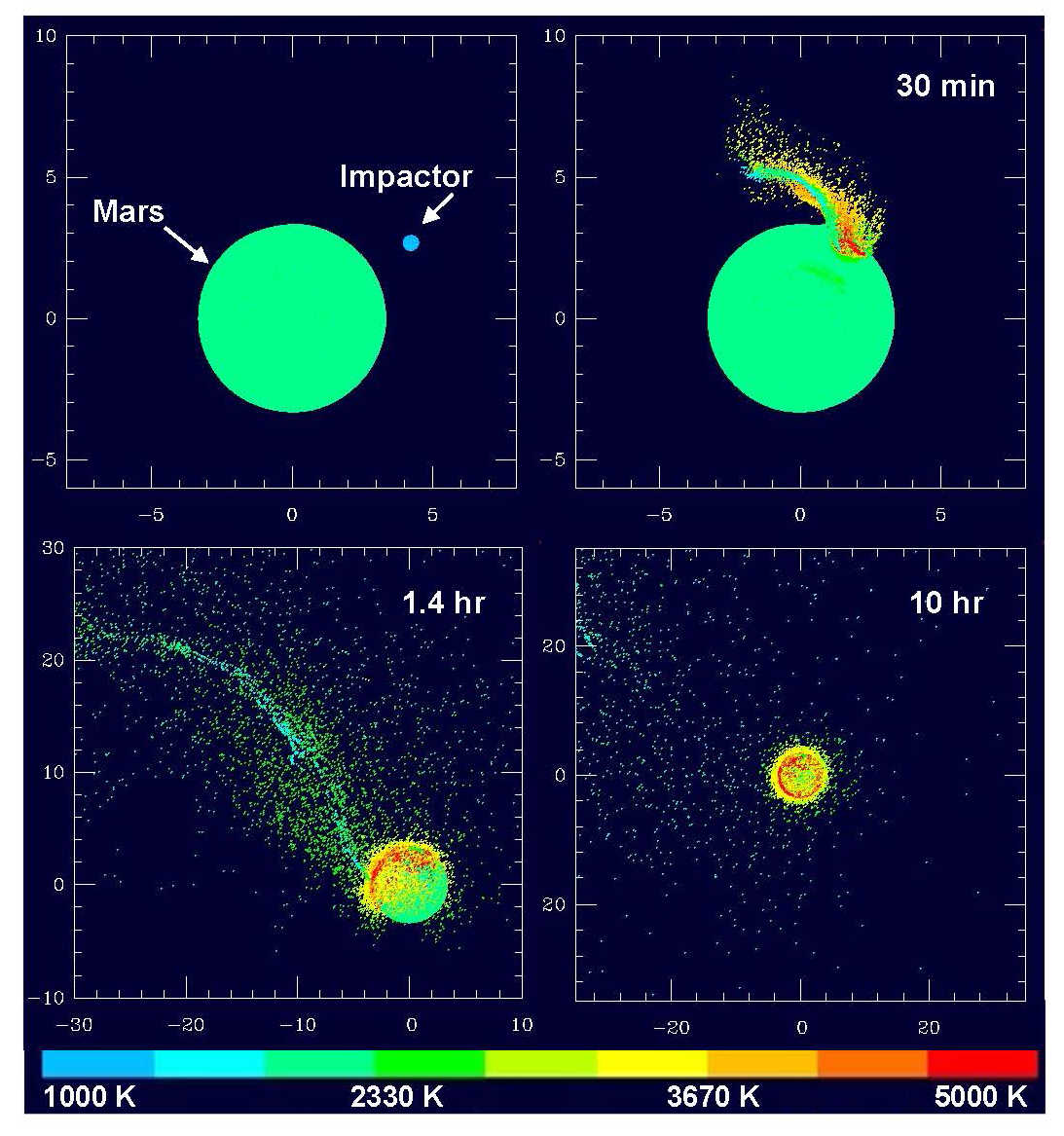 “A key result of the new work is the size of the impactor; we find that a large impactor — similar in size to the largest asteroids Vesta and Ceres — is needed, rather than a giant impactor,” Canup said. “The model also predicts that the two moons are derived primarily from material originating in Mars, so their bulk compositions should be similar to that of Mars for most elements. However, heating of the ejecta and the low escape velocity from Mars suggests that water vapor would have been lost, implying that the moons will be dry if they formed by impact.”

The new Mars model invokes a much smaller impactor than considered previously. Our Moon may have formed when a Mars-sized object crashed into the nascent Earth 4.5 billion years ago, and the resulting debris coalesced into the Earth-Moon system. The Earth’s diameter is about 8,000 miles, while Mars’ diameter is just over 4,200 miles. The Moon is just over 2,100 miles in diameter, about one-fourth the size of Earth.

While they formed in the same timeframe, Deimos and Phobos are very small, with diameters of only 7.5 miles and 14 miles respectively, and orbit very close to Mars. The proposed Phobos-Deimos forming impactor would be between the size of the asteroid Vesta, which has a diameter of 326 miles, and the dwarf planet Ceres, which is 587 miles wide.

This composite image compares how big the moons of Mars appear, as seen from the surface of the Red Planet, in relation to the size that our Moon appears from Earth’s surface. While Earth’s Moon is 100 times bigger than the larger Martian moon Phobos, the Martian moons orbit much closer to their planet, making them appear relatively larger in the sky. Deimos, at far left, and Phobos, beside it, are shown together as photographed by NASA’s Mars rover Curiosity on Aug. 1, 2013. 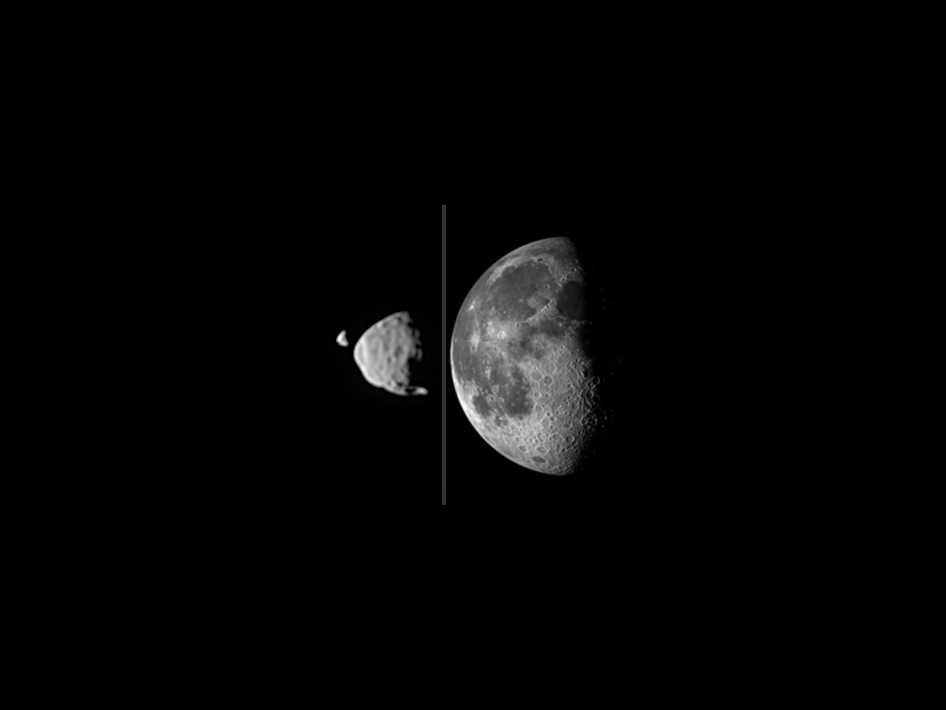 
“We used state-of-the-art models to show that a Vesta-to-Ceres-sized impactor can produce a disk consistent with the formation of Mars’ small moons,” said the paper’s second author, Dr. Julien Salmon, an SwRI research scientist. “The outer portions of the disk accumulate into Phobos and Deimos, while the inner portions of the disk accumulate into larger moons that eventually spiral inward and are assimilated into Mars. Larger impacts advocated in prior works produce massive disks and more massive inner moons that prevent the survival of tiny moons like Phobos and Deimos.”

These findings are important for the Japan Aerospace Exploration Agency (JAXA) Mars Moons eXploration (MMX) mission, which is planned to launch in 2024 and will include a NASA-provided instrument. The MMX spacecraft will visit the two Martian moons, land on the surface of Phobos and collect a surface sample to be returned to Earth in 2029.

“A primary objective of the MMX mission is to determine the origin of Mars’ moons, and having a model that predicts what the moons compositions would be if they formed by impact provides a key constraint for achieving that goal,” Canup said.

The “Origin of Phobos and Deimos by the impact of a Vesta-to-Ceres-sized body with Mars,” is published in the April 18, 2018, issue of Science Advances. The research was funded by NASA’s Solar System Exploration Research Virtual Institute (SSERVI) in Silicon Valley, and by NASA’s Emerging Worlds program. The research was conducted as part of the Institute for the Science of Exploration Targets (ISET), a SSERVI team from SwRI’s Boulder, Colorado, office.