Have you ever wondered why animals avoid dangers by sensing some "signs" possibly related to the danger? A simple form of this phenomenon is called "fear conditioning", which is a type of learning commonly seen in every animal on the earth. By manipulating activity of specific neurons of the zebrafish brain, scientists at the National Institute of Genetics (NIG) in Japan have elucidated a neuronal population essential for fear conditioning in zebrafish.

The study, published in the April 25 issue of BMC Biology, suggests that such a neural circuit essential for fear conditioning exists and is conserved during vertebrate evolution.

How can animals avoid dangers to survive? If animals experienced dangerous events together with some "signs", animals memorize the sign, became in fear of it, and perform fear responses, for instance an escape behavior. This is a type of learning, which is called "fear conditioning". In mammals including humans, the amygdala, one of the structures of the brain, plays an important role in fear conditioning. However, how the brain structure and neural circuits essential for fear conditioning have been conserved (or changed) during vertebrate evolution has not been known.


A section of the zebrafish telencephalon. The neurons essential for fear conditioning are illuminated with GFP (green fluorescence protein). Scale bars: 200 μm. 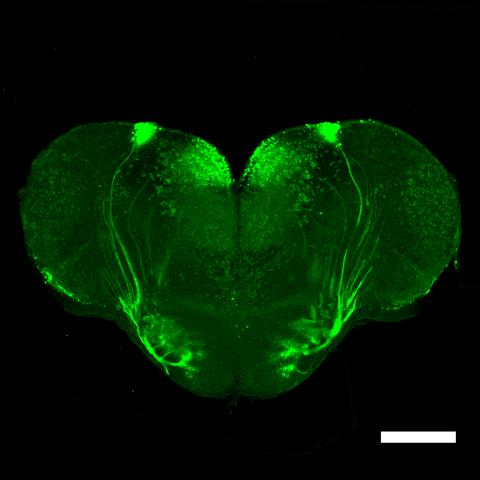 Zebrafish, a popular model animal in biological studies, can perform fear conditioning as well as human and other mammals. Professor Kawakami's group has succeeded in developing technologies for visualizing and manipulating specific brain neurons in zebrafish by employing the yeast transcription factor Gal4, the green fluorescent protein (GFP), and the botulinum neurotoxin (BoTx). They have generated a collection of transgenic fish lines being used to study brain functions as well as other various organs by zebrafish researchers all over the world. Of the nearly 2,000 such transgenic fish lines in his lab, one played an important role in the current study that labels neurons in the dorsomedial (Dm) area of the telencephalon of zebrafish.

"In mammals including human and mouse, fear conditioning is mediated by a brain area called the amygdala. The amygdala integrates information about dangerous events, like electric shock, and some signs, such as visual or auditory stimuli. However, in fish, such neurons have not been found." Prof. Kawakami said.

For this purpose, Dr. Lal, a former graduate student in his lab, developed a behavioral analysis system. Fish are placed with a small tank with two compartments. Green LEDs are not harmful to fish. They gave electric shocks while green LEDs are on ten times a day for five consecutive days. Finally, when green LEDs are on, fish learned to escape from the compartment which was illuminated, and moved to another compartment.

"It is fun to see how smart they are" Dr. Lal said.

Using these technologies and resources, they have found that neurons in the region called Dm of the telencephalon of fish are essential for fear conditioning. Namely, these neurons are a functional equivalent of the amygdala of mammals. This result is a clue to clarify the structure and evolution of the neural circuit essential for fear conditioning.

Prof. Kawakami showed us his zebrafish facility where thousands of fish tanks can be seen, each of which contains genetically different fish that can turn on, or drive the GFP or BoTx expression in different types of neurons in the brain or in the body.

"This work showcases a successful application of our genetic resources in the study of the brain function. It is also expected to be the basis for clarifying the causes and treatment of diseases involving fear and anxiety and PTSD.", Prof. Kawakami said.

This study was supported partly by JSPS KAKENHI Grant Numbers JP15H02370 and JP16H01651, and NBRP from Japan Agency for Medical Research and Development (AMED).