Future Wearable Device Could Tell How We Power Human Movement

For athletes and weekend warriors alike, returning from a tendon injury too soon often ensures a trip right back to physical therapy. However, a new technology developed by University of Wisconsin-Madison engineers could one day help tell whether your tendons are ready for action.

A team of researchers led by UW-Madison mechanical engineering professor Darryl Thelen and graduate student Jack Martin has devised a new approach for noninvasively measuring tendon tension while a person is engaging in activities like walking or running.

This advance could provide new insights into the motor control and mechanics of human movement. It also could apply to fields ranging from orthopedics, rehabilitation, ergonomics and sports. The researchers described their approach in a paper published (April 23, 2018) in the journal Nature Communications.

UW-Madison researchers developed a simple, noninvasive wearable device that enables them to measure tendon tension while a person is engaging in activities like walking or running. Here, the device is placed over the Achilles tendon. 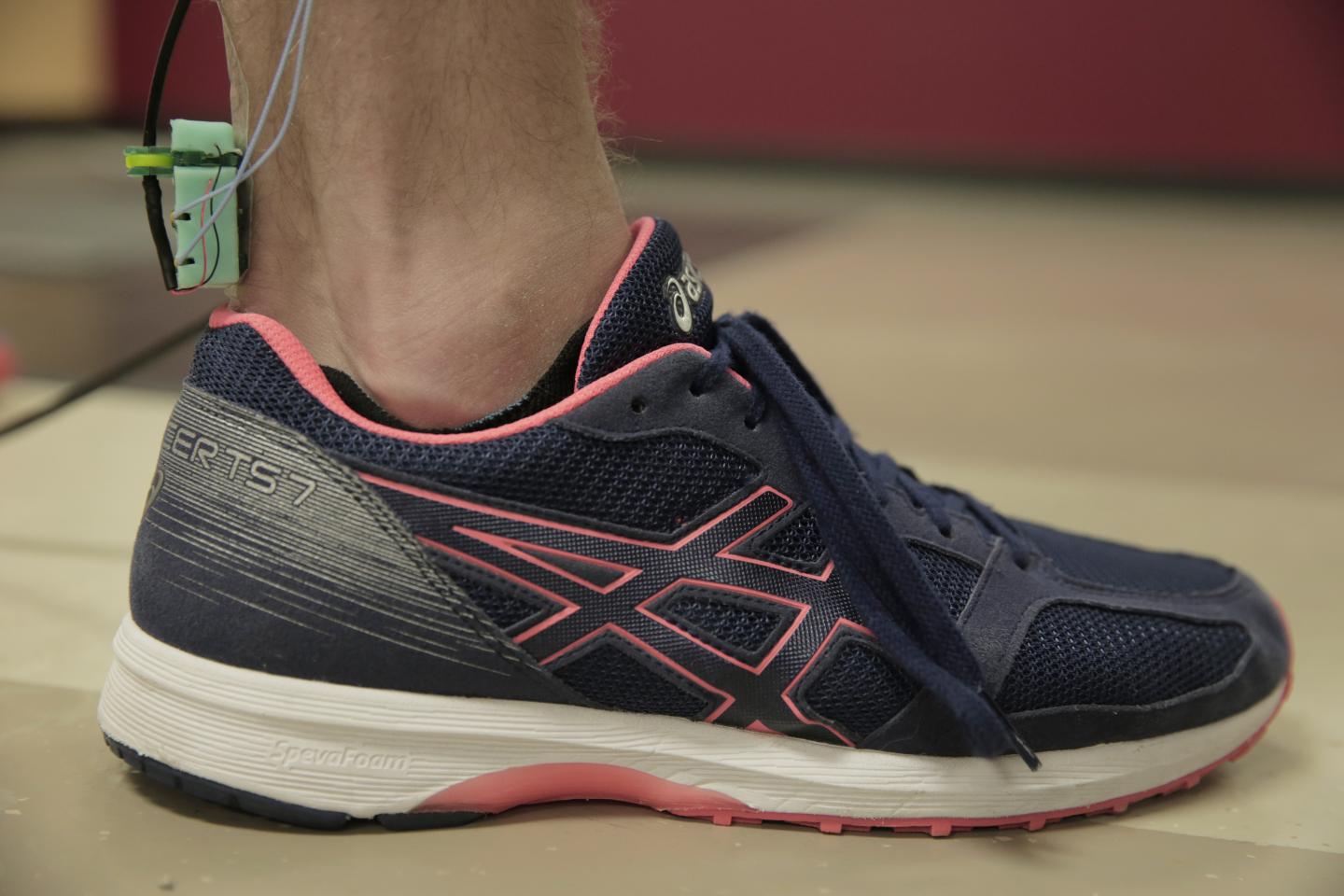 Muscles generate movement at joints by pulling on tendons, which are bands of tissue that connect muscles to the skeleton. But assessing the forces transmitted by tendons inside the body of a living person is tricky.

"Currently, wearables can measure our movement, but do not provide information on the muscle forces that generate the movement," says Thelen, whose work is supported by the National Institutes of Health.

To overcome this challenge, Thelen and his collaborators developed a simple, noninvasive device that can be easily mounted on the skin over a tendon. The device enables the researchers to assess tendon force by looking at how the vibrational characteristics of the tendon change when it undergoes loading, as it does during movement. 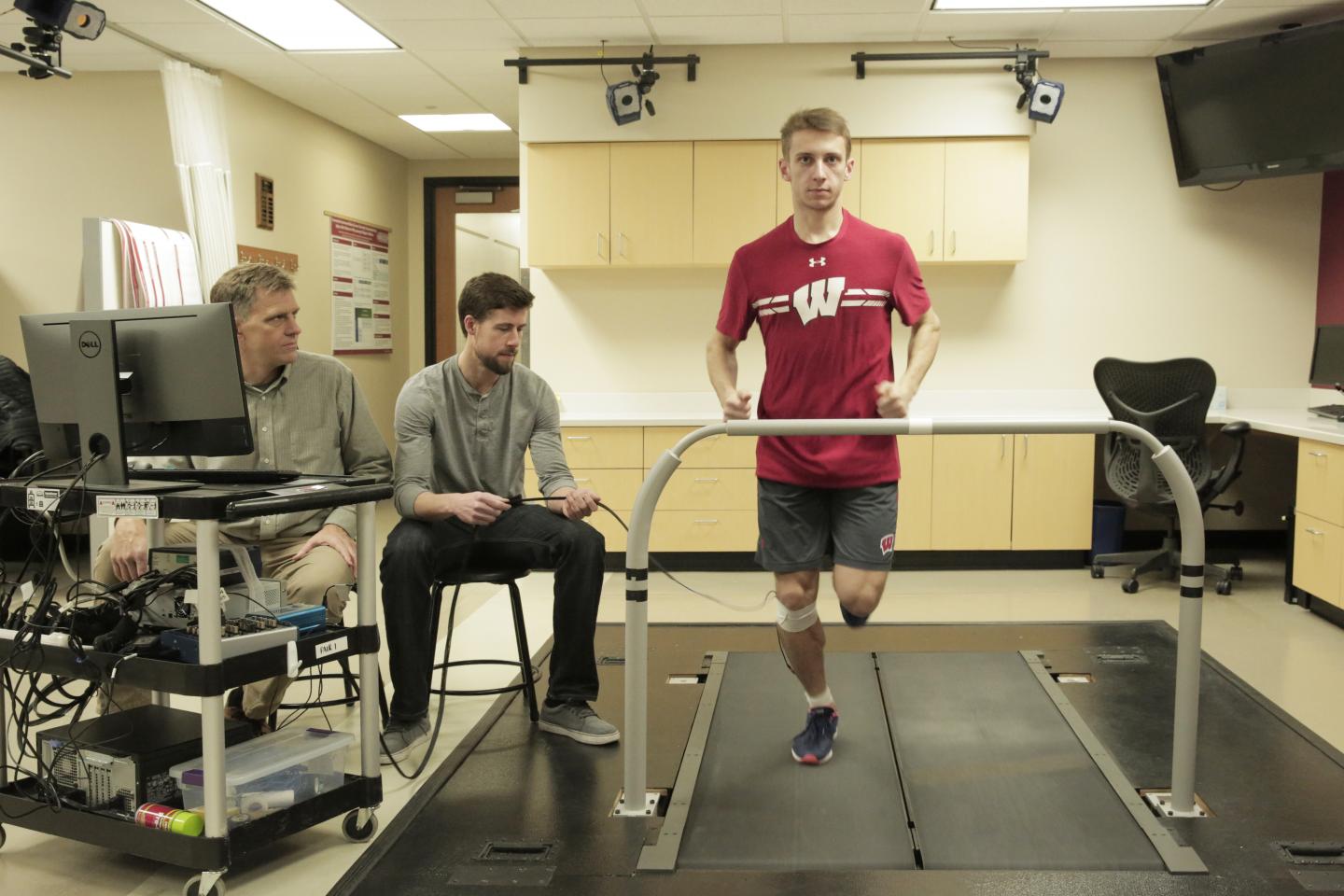 "We've found a way to measure the vibrational characteristics -- in this case, the speed of a shear wave traveling along a tendon -- and then we went further and determined how we can interpret this measurement to find the tensile stress within the tendon," Thelen says.

The new system for measuring wave speed is portable and relatively inexpensive. It includes a mechanical device that lightly taps the tendon 50 times per second. Each tap initiates a wave in the tendon, and two miniature accelerometers determine how quickly it travels.

The researchers have used the device to measure forces on the Achilles tendon, as well as the patellar and hamstring tendons. In each case, they can measure what happens in the tendon when users modify their gait -- for example, by changing step length or speed.

By measuring how muscles and tendons behave within the human body, this system could eventually enable clinicians to plan more effective treatments for patients suffering from musculoskeletal diseases and injuries.

"We think the potential of this new technology is high, both from a basic science standpoint and for clinical applications," Thelen says. "For example, tendon force measures could be used to guide treatments of individuals with gait disorders. It may also be useful to objectively assess when a repaired tendon is sufficiently healed to function normally and allow a person to return to activity."

Contacts and sources:
Darryl Thelen
University of Wisconsin-Madison
on April 25, 2018