Drinking Baking Soda Could Be an Inexpensive, Safe Way To Combat Autoimmune Disease

A daily dose of baking soda may help reduce the destructive inflammation of autoimmune diseases like rheumatoid arthritis, scientists say.

They have some of the first evidence of how the cheap, over-the-counter antacid can encourage our spleen to promote instead an anti-inflammatory environment that could be therapeutic in the face of inflammatory disease, Medical College of Georgia scientists report in the Journal of Immunology.

They have shown that when rats or healthy people drink a solution of baking soda, or sodium bicarbonate, it becomes a trigger for the stomach to make more acid to digest the next meal and for little-studied mesothelial cells sitting on the spleen to tell the fist-sized organ that there's no need to mount a protective immune response.

"It's most likely a hamburger not a bacterial infection," is basically the message, says Dr. Paul O'Connor, renal physiologist in the MCG Department of Physiology at Augusta University and the study's corresponding author.

Pictured is Dr. Paul O'Connor, renal physiologist in the lab at the Medical College of Georgia Department of Physiology at Augusta University. 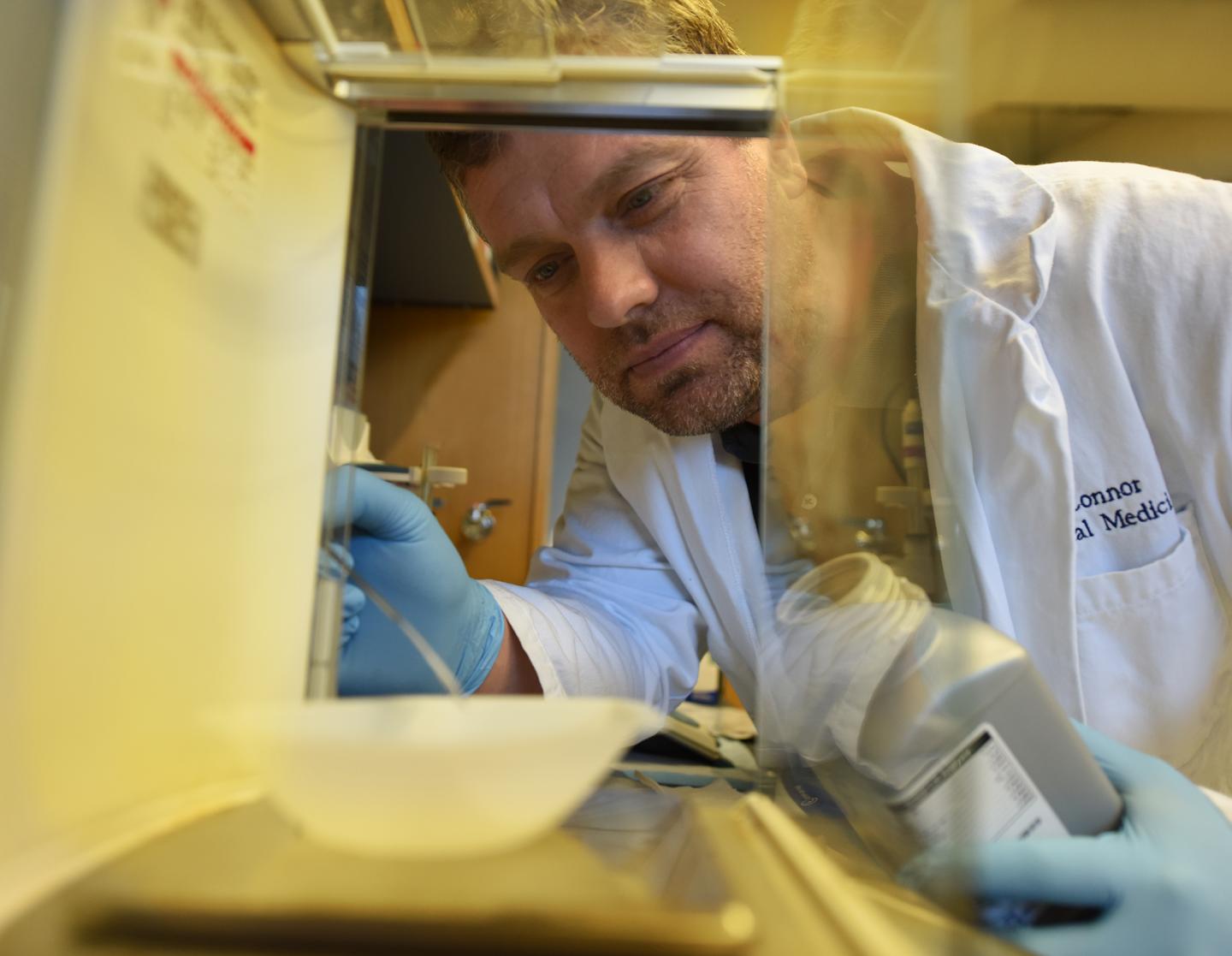 Mesothelial cells line body cavities, like the one that contains our digestive tract, and they also cover the exterior of our organs to quite literally keep them from rubbing together. About a decade ago, it was found that these cells also provide another level of protection. They have little fingers, called microvilli, that sense the environment, and warn the organs they cover that there is an invader and an immune response is needed.

Drinking baking soda, the MCG scientists think, tells the spleen - which is part of the immune system, acts like a big blood filter and is where some white blood cells, like macrophages, are stored - to go easy on the immune response. "Certainly drinking bicarbonate affects the spleen and we think it's through the mesothelial cells," O'Connor says.

The conversation, which occurs with the help of the chemical messenger acetylcholine, appears to promote a landscape that shifts against inflammation, they report.

In the spleen, as well as the blood and kidneys, they found after drinking water with baking soda for two weeks, the population of immune cells called macrophages, shifted from primarily those that promote inflammation, called M1, to those that reduce it, called M2. Macrophages, perhaps best known for their ability to consume garbage in the body like debris from injured or dead cells, are early arrivers to a call for an immune response.

In the case of the lab animals, the problems were hypertension and chronic kidney disease, problems which got O'Connor's lab thinking about baking soda.

One of the many functions of the kidneys is balancing important compounds like acid, potassium and sodium. With kidney disease, there is impaired kidney function and one of the resulting problems can be that the blood becomes too acidic, O'Connor says. Significant consequences can include increased risk of cardiovascular disease and osteoporosis.

"It sets the whole system up to fail basically," O'Connor says. Clinical trials have shown that a daily dose of baking soda can not only reduce acidity but actually slow progression of the kidney disease, and it's now a therapy offered to patients.

That's when the anti-inflammatory impact began to unfold as they saw reduced numbers of M1s and increased M2s in their kidney disease model after consuming the common compound.

When they looked at a rat model without actual kidney damage, they saw the same response. So the basic scientists worked with the investigators at MCG's Georgia Prevention Institute to bring in healthy medical students who drank baking soda in a bottle of water and also had a similar response.

The shifting landscape, he says, is likely due to increased conversion of some of the proinflammatory cells to anti-inflammatory ones coupled with actual production of more anti-inflammatory macrophages. The scientists also saw a shift in other immune cell types, like more regulatory T cells, which generally drive down the immune response and help keep the immune system from attacking our own tissues. That anti-inflammatory shift was sustained for at least four hours in humans and three days in rats.

The shift ties back to the mesothelial cells and their conversations with our spleen with the help of acetylcholine. Part of the new information about mesothelial cells is that they are neuron-like, but not neurons O'Connor is quick to clarify.

"We think the cholinergic (acetylcholine) signals that we know mediate this anti-inflammatory response aren't coming directly from the vagal nerve innervating the spleen, but from the mesothelial cells that form these connections to the spleen," O'Connor says.

In fact, when they cut the vagal nerve, a big cranial nerve that starts in the brain and reaches into the heart, lungs and gut to help control things like a constant heart rate and food digestion, it did not impact the mesothelial cells' neuron-like behavior.

The affect, it appears, was more local because just touching the spleen did have an effect.

When they removed or even just moved the spleen, it broke the fragile mesothelial connections and the anti-inflammatory response was lost, O'Connor says. In fact, when they only slightly moved the spleen as might occur in surgery, the previously smooth covering of mesothelial cells became lumpier and changed colors.

"We think this helps explain the cholinergic (acetylcholine) anti-inflammatory response that people have been studying for a long time," O'Connor says.

Studies are currently underway at other institutions that, much like vagal nerve stimulation for seizures, electrically stimulate the vagal nerve to tamp down the immune response in people with rheumatoid arthritis. While there is no known direct connection between the vagal nerve and the spleen - and O'Connor and his team looked again for one - the treatment also attenuates inflammation and disease severity in rheumatoid arthritis, researchers at the Feinstein Institute for Medical Research reported in 2016 in the journal Proceedings of the National Academy of Sciences. 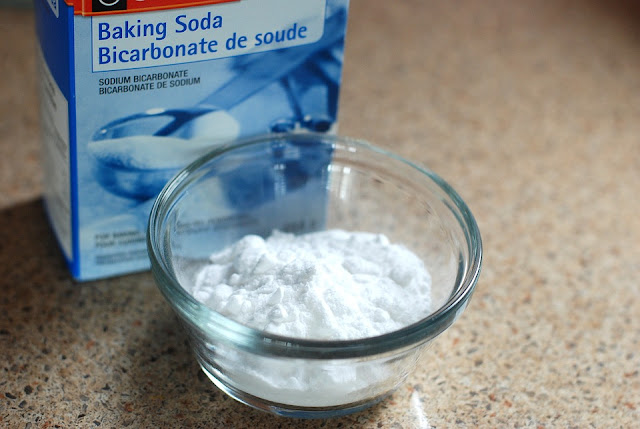 "You are not really turning anything off or on, you are just pushing it toward one side by giving an anti-inflammatory stimulus," he says, in this case, away from harmful inflammation. "It's potentially a really safe way to treat inflammatory disease."

The spleen also got bigger with consuming baking soda, the scientists think because of the anti-inflammatory stimulus it produces. Infection also can increase spleen size and physicians often palpate the spleen when concerned about a big infection.

Other cells besides neurons are known to use the chemical communicator acetylcholine. Baking soda also interact with acidic ingredients like buttermilk and cocoa in cakes and other baked goods to help the batter expand and, along with heat from the oven, to rise. It can also help raise the pH in pools, is found in antacids and can help clean your teeth and tub.

The research was funded by the National Institutes of Health.