All life on Earth -- from blue whales to microbes -- uses carbon in one form or another. But all carbon is not created equal.

In the oceans, some carbon-containing compounds, such as sugars and proteins, are quickly gobbled up by microorganisms, while others -- such as the chitin found in fish scales -- are much harder to consume.

Scientists have long believed that relatively little of the latter, called "refractory carbon," is degraded in the ocean. Much of it falls to the ocean floor and helps make up deep-water sediment, or so the thinking has been.

Microbes in a sub-seafloor aquifer feast on carbon in fluids flowing through the permeable rock. 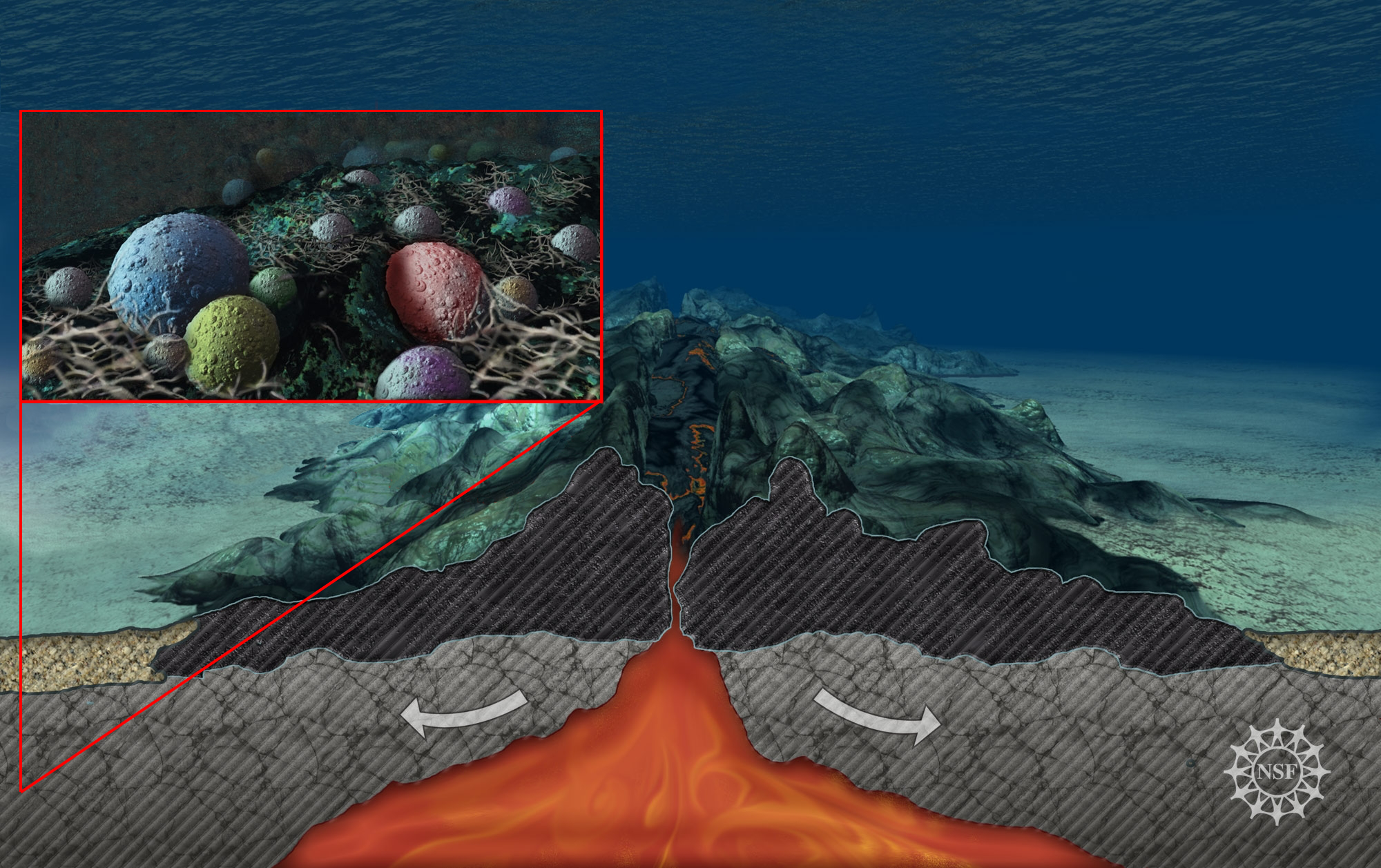 Now a research team led by ecologists Sunita Shah Walter of the University of Delaware and Peter Girguis of Harvard University has shown that underground aquifers near the undersea Mid-Atlantic Ridge act like natural biological reactors, pulling in cold, oxygenated seawater, and allowing microbes to consume more -- perhaps much more -- refractory carbon than scientists believed.

"This work shows that the vast sub-seafloor community of microbes can be fed by seawater circulating through deep ocean crust," said Michael Sieracki, a program director in the National Science Foundation's Division of Ocean Sciences, which funded the research through its Center for Dark Energy Biosphere Investigations. "In turn, these microbes change the composition of the seawater that circulates back to the ocean." The results are published this week in the journal Nature Geoscience.

Water from the sea floor "migrates" into Earth's crust and flows through the horizontal aquifer. 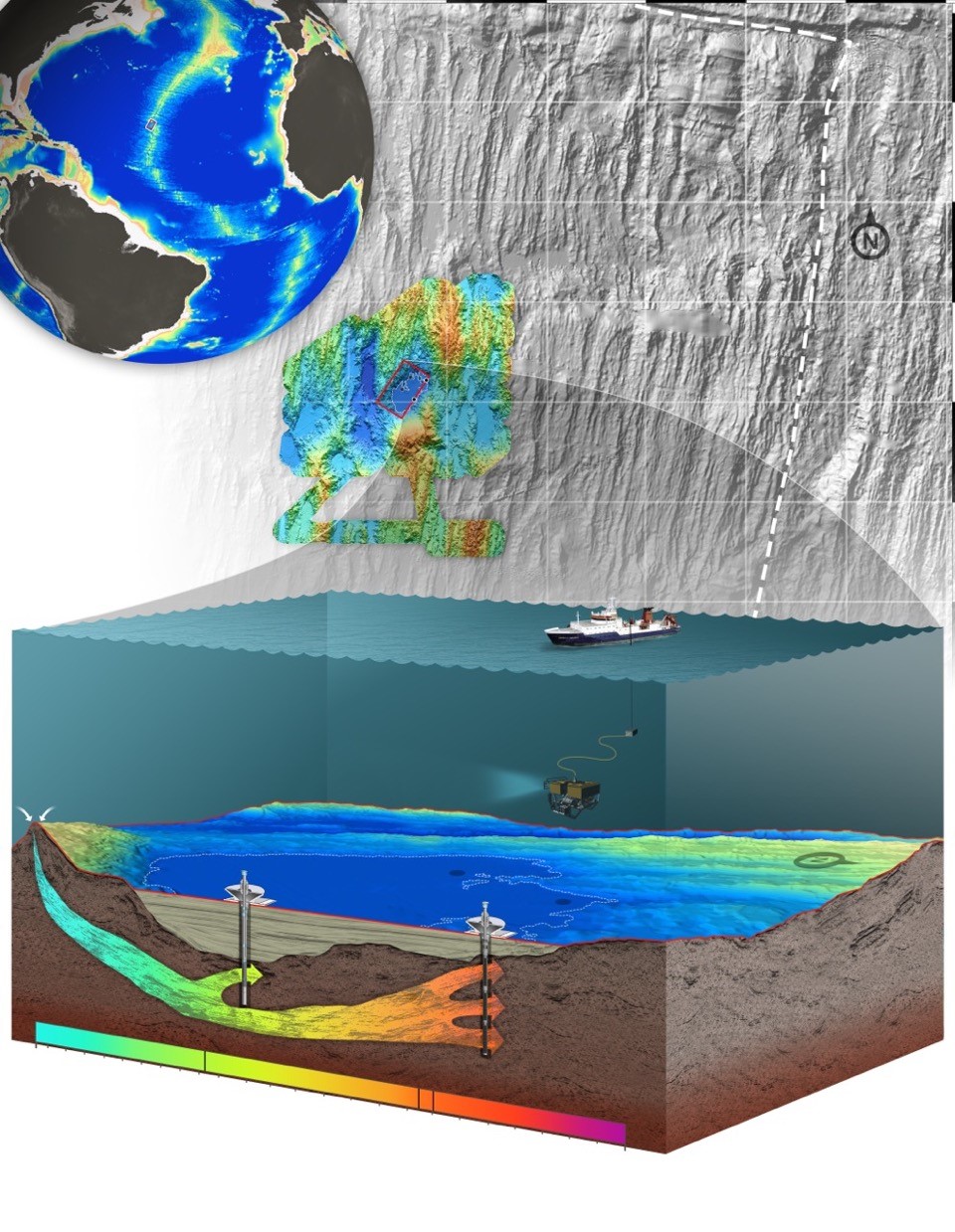 "This has the prospect of reshaping the way we think about carbon cycling in the deep ocean," Girguis said. "We know that carbon is produced at the surface by photosynthetic algae. We know fish eat some of it. We know some of it sinks. We can account for that, but we've had some giant questions in our 'carbon budget.'"

At the heart of the system, Girguis said, is the mid-ocean ridge: undersea mountains that circle the globe.

In the deep ocean, the ridge acts like a convection cell -- water seeps into cracks and fissures on either side and is heated as it gets closer to the center.

As the heated water rises, cold, oxygenated water is pulled into the rocks, creating a massive undersea aquifer. This aquifer is a rare chance to study the ocean in its natural state, according to Girguis.

North Pond is a sediment-filled depression on the western flank of the undersea Mid-Atlantic Ridge. 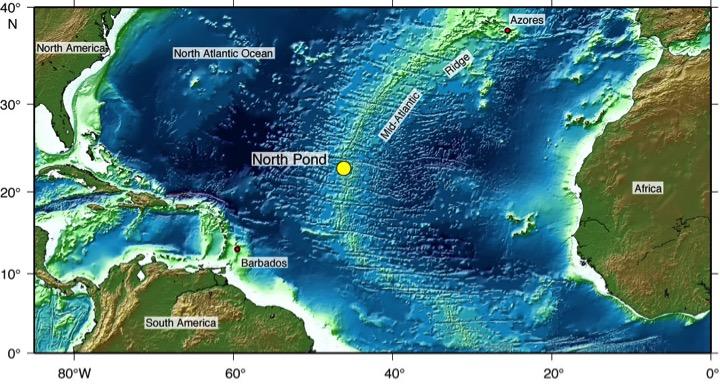 To get those measurements, Girguis and colleagues targeted a site on the Mid-Atlantic Ridge dubbed the "North Pond."

The team of researchers from Harvard, the University of Southern California, the Marine Biological Laboratory, the University of California, Santa Cruz, and other institutions drilled a series of wells and collected water samples to identify which microbes call the aquifer home and whether they're capable of consuming carbon.

"We wanted to collect pristine water and microbial samples," Girguis said. "When you look at the mid-ocean ridge and think about the water that's circulating through it, it looks as though a lot of the ocean is moving through this cold environment. We wanted to know what's going on there with the microbes and what's happening with the carbon they get."

Carbon-eating microbes in the aquifers

While Girguis and colleagues were able to show that microbes in the aquifers could eat carbon, it remained unclear how active the microbes were.

"We have been able to show that water comes in with a certain oxygen concentration, and as it drops, the carbon goes down in direct proportion," he said. "That gives us a high degree of confidence that microbes are eating it."

In fact, Girguis said, it's possible that microbes are eating carbon at an impressive rate.

"The numbers we calculated from this one site suggest that a little more than 50 percent of the carbon there is being consumed," he said. "We might eventually find that a majority of the carbon is being degraded in these aquifers, especially since the entire ocean circulates through them every few tens of thousands of years. That's fast on ocean timescales."

Going forward, Girguis and colleagues hope to better quantify how much carbon is consumed as seawater moves through the aquifers, and whether the minerals in the mid-ocean ridge's basalt rock may contribute to the microbes' ability to feast on carbon.

A watertight well allows access to pristine fluids in the aquifer under the Mid-Atlantic Ridge. 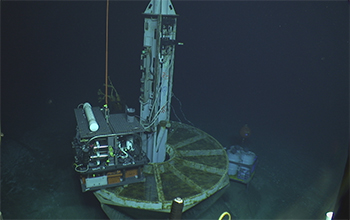 
"This started with the intent of saying: let's figure out what microbes are doing in this cold, oxygenated aquifer, and we can add those data to our understanding of the carbon cycle," Girguis said. "But we were astonished by the results.

"All creatures depend on carbon, and there's a cycle in which carbon is produced and consumed. Take seawater and pump it through an underground, oxygenated aquifer and you suddenly have an opportunity to take a close look at these processes."