Assembly of Most Massive Galaxy Cluster Seen for the First Time

A dense flock of 14 galaxies from 1.4 billion years after the Big Bang is destined to become one of the most massive structures in the modern universe.

For the first time, astronomers have witnessed the birth of a colossal cluster of galaxies. Their observations reveal at least 14 galaxies packed into an area only four times the diameter of the Milky Way’s galactic disk. Computer simulations of the galaxies predict that over time the cluster will assemble into one of the most massive structures in the modern universe, the astronomers report in the April 26 issue of Nature.

Galaxies within the cluster are churning out stars at an incredible pace, ranging from 50 to 1,000 times the Milky Way’s star formation rate. These rates are higher than can be explained for solitary galaxies, suggesting that the galaxies are influencing one another and are actively assembling into a cluster.

Astronomical Assembly: Astronomers recently discovered a group of interacting and merging galaxies in the early universe, as seen in this artist’s illustration. 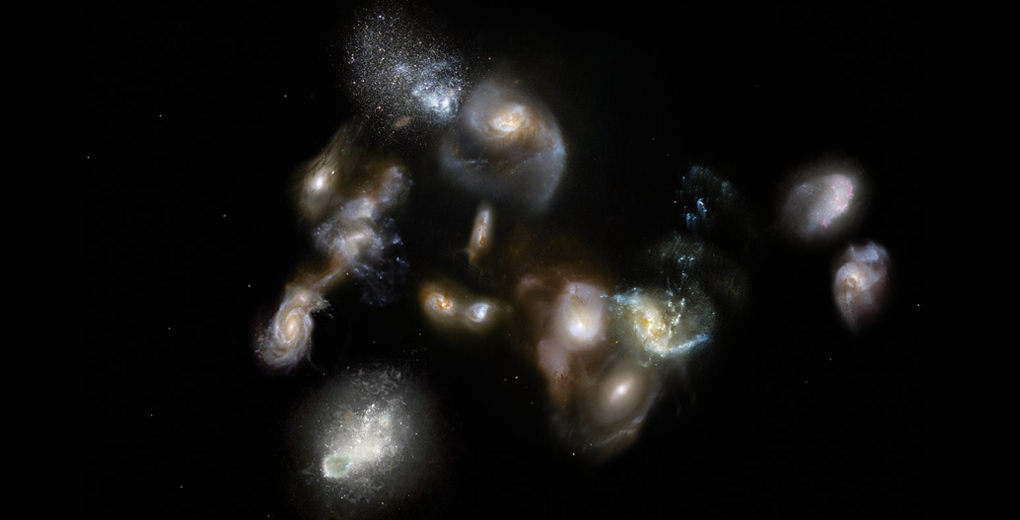 “More so than any other candidate discovered to date, this seems like we’re catching a cluster in the process of being assembled,” says study co-author Chris Hayward, an associate research scientist at the Center for Computational Astrophysics at the Flatiron Institute in New York City. “This is the missing link in our understanding of how clusters form.”

Astrophysicists simulated the assembly of a budding cluster of 14 galaxies that was recently discovered by the Atacama Large Millimeter/submillimeter Array. As the simulation progresses, the galaxies merge into one titanic elliptical galaxy surrounded by a halo of galaxies, stars and dust. This configuration resembles that of galaxy clusters seen in the modern universe.


Galaxy clusters are the largest structures held together by gravity in the present-day universe and contain hundreds or even thousands of galaxies. Clusters grow over time as gravity draws in more material. This newborn galaxy cluster, or protocluster, is around 12.4 billion light-years away from Earth. That distance means that the protocluster appears today as it existed 1.4 billion years after the Big Bang.

How the assembly of galaxies got so big so fast “is a bit of a mystery,” says study co-author Scott Chapman, the Killam Professor in astrophysics at Dalhousie University in Halifax, Canada. “It wasn’t built up gradually over billions of years, as you might expect.”

Chapman, Hayward, Tim Miller of Yale University, and collaborators spotted the protocluster during a follow-up to a survey conducted using the South Pole Telescope in Antarctica. That undertaking inspected around 6 percent of the sky, but with relatively coarse resolution. In those observations, the protocluster was the brightest light source not magnified by the effect of a massive object’s gravity, which bends light like a lens. While bright, the source just looked like a fuzzy blob composed of at least three galaxies. An additional study by the Atacama Large Millimeter/submillimeter Array in Chile provided clarity and a surprise.

“It just hit you in the face because all of a sudden there are all these galaxies there,” Chapman says. “We went from three to 14 in one fell swoop. It instantly became obvious this was a very interesting, massive structure forming and not just a flash in the pan.”

In total, the protocluster contains around 10 trillion suns’ worth of mass. All that material in such a confined space means that the galaxies will probably merge over time, rather than drift apart. A numerical simulation developed by Hayward, Chapman and colleagues projected how the protocluster would grow over the next billion years. Over that time span, the 14 galaxies will merge into one giant elliptical galaxy surrounded by a halo of galaxies, stars and dust. The researchers estimate that in the modern-day universe, the cluster will contain roughly 1,000 trillion suns’ worth of mass. That’s comparable to the mass of the Coma cluster of galaxies that lies a few hundred million light-years from Earth.

The surprisingly high star formation rates within the galaxies provide further evidence that the galaxies are forming a cluster, says Hayward. The observed surge of star formation during the protocluster’s assembly fits with the composition of modern galaxy clusters, which contain an abundance of old stars of around the same age. “There’s some special aspect of this environment that’s causing the galaxies to form stars much more rapidly than individual galaxies that aren’t in this special place,” says Hayward. One possible explanation is that the gravitational tug of neighboring galaxies compresses gas within a galaxy, triggering star formation.

The protocluster is a precursor to the larger and more mature galaxy clusters seen in the modern universe, making the protocluster an excellent test bed for learning more about how present-day clusters formed and evolved. Modern clusters, for instance, brim with superheated gas that can reach temperatures of more than 1 million degrees. Scientists aren’t sure how that gas got there, though. The high rate of star formation in the newly discovered protocluster may provide a clue: A deluge of newborn stars in a forming cluster may spew hot gas into the voids between the galaxies. That expelled gas is not dense enough to form stars and instead lingers throughout the cluster.

Further exploration of protoclusters will provide additional insight, Chapman says. The group has already identified two more protoclusters from the South Pole Telescope survey, though they are not as spectacular, he says. “As we flush out the details of those, we’ll see just how similar they are to this structure.”