Algorithm Shaped News Landscape and the Rise of Disinformation

Fake news is not a new phenomenon at all; it is as old as the newspaper industry. The first occurrence of fake news was reported in the 16th century . It is only recently however that it has surged back onto our radar screens, in the wake of the digital transformation of news from offline to online distribution and the rise of social media as a news distribution channel.

On 26 April 2018 the European Commission took steps to tackle the spread and impact of online disinformation in Europe and ensure the protection of European values and democracies.

The Commission proposed an EU-wide Code of Practice on Disinformation, support to an independent network of fact-checkers, and concrete tools to stimulate quality journalism. 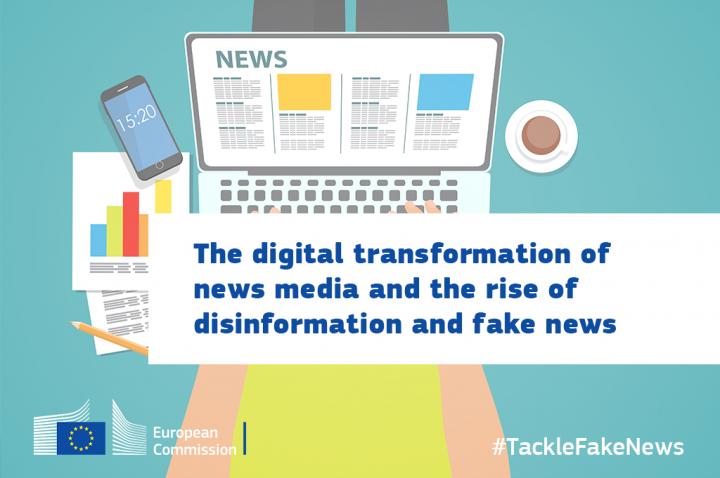 The report points out that two-thirds of online news consumers prefer to access it through algorithm-driven platforms such as search engines and news aggregators, and social media websites.

It also states that market power and revenue streams shifted from news publishers to platform operators who have the data to match readers, articles and ads.

The quality concerns in news are a result of not so much the shift from offline to online distribution, but rather the shift from direct access to newspapers to indirect algorithm-driven distribution of news. This is characterised by the mix of genuine edited news articles, user generated content and deliberately produced disinformation.

Despite the much wider availability and accessibility of online news, user trust in news media, especially in online sources of news, is low and differs considerably by age, education and country. Traditional print and broadcasted news remain the most trusted sources.

True news audiences dwarf false news audiences, though fake news travels faster and further on social media sites, also across echo chambers and may capture consumer attention longer than true news. Research in this field, however, is only at the fledgling stage, with findings sensitive to the sample selection of false and real news sources.

Most studies analysed in the JRC report find limited impact of false news on political choices.

There are concerns about distribution platforms such as search engines, news aggregators and social media sites, because their main objective is not the provision of quality news but rather to maximize traffic and advertising revenue. They may weaken consumer trust and news brand recognition and facilitate the introduction of disinformation and false news into the market. This may contribute to news market failure when it becomes difficult for consumers to distinguish between good quality news and disinformation or fake news.

The JRC is also carrying out extensive research on the issue of fake news. From identifying sources of disinformation to tracking trendy narratives, this work seeks to detect early such stories and prevent them from spreading.

The European Media Monitor (EMM) developed by JRC covers about 300,000 articles per day from traditional news sites. With such an overwhelming volume of information, specific software is necessary in order to classify the information by policy area, and to cluster it in order to find the top stories. However, the monitoring cannot rely on technology alone, human analysis is ultimately necessary.

The JRC has been working with the European External Action Service East StratComm Task Force, set up by the EEAS in 2015 to address pro-Kremlin disinformation. This surveillance allows capturing trends and ongoing narratives, for instance, that NATO was behind the protests in Ukraine or that the West is trying to attack Russia or to legalize pedophilia.

The JRC is also developing monitoring to cover social media, including Twitter. Around 55 million tweets circulate daily through this platform. The JRC analyses a sample of 10% of them, in order to identify trends, to see how news can quickly "go viral", and to map communities based on the information users share and on how they interact with each other.

Another area of current research is the tonality of known fake news. Usually, balanced journalistic reporting presents positive and negative aspects, therefore the overall tonality is neutral. Disinformation articles, on the contrary, often push emotions to the extreme. On this topic, the JRC is organizing workshops with journalists, social media managers and policy officers, in order to help them understand the use of emotions by fake news sources.

Citation: JRC study: The digital transformation of news media and the rise of disinformation and fake news
on April 29, 2018