Today, 90% of organic chemicals are based on fossil fuels, meaning they are based on non-renewable resources. 70% of proteins in the European Union are imported. An alternative is needed! Due to their high growth rate and the small land area required, algae could become that alternative. We’re not at that stage just yet. The challenge is to optimise the algae value chain, from local production to storage and handling, in such a way that it becomes a viable, economically relevant industry.

That’s the aim of IDEA, a new project in the European Interreg North-West Europe programme, with partners in Belgium, the Netherlands, France, Germany and Ireland.

In Ireland, Teagasc and Dr Maria Hayes based at the research centre in Ashtown, Dublin are involved in the project.

When we think of algae production, southern countries with warm climates spring to mind. However, Northwest Europe is also suitable for commercial algae cultivation, albeit for specific types of algae. “We already know it’s possible in closed systems, for example in empty greenhouses. But we’re also looking for alternatives outside the greenhouse”, VITO’s Leen Bastiaens, lead partner in the IDEA project, explains.

IDEA focuses on the complete value chain of algae production. At the moment, the various steps all exist separately, but there is not yet a full chain that is able to continually guarantee the supply of high-quality algae on an industrial scale. In concrete terms, IDEA will work on the cultivation and harvesting of different types of algae, all year round. The project will also investigate how water can be reused to make cultivation more viable, in both ecological and economical terms.

This image shows a plastic plate photobioreactor for the cultivation of microalgae and other photosynthetic organisms. It has an operational volume of 500 liters and the principle was developed in the 1990ies. 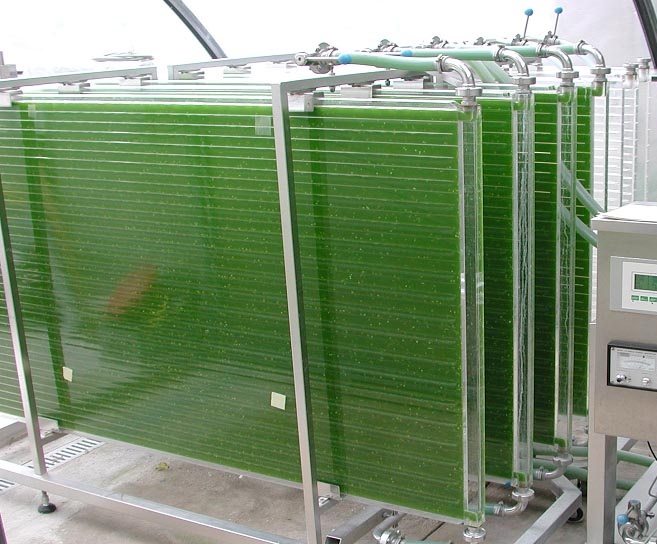 In addition, IDEA will look into the various possibilities for storing and transporting algae. Finally, the bio-refining of the algae will be studied, to ensure it reaches the end user in optimal workable condition. In the IDEA algae value chain, this end user is not the consumer in the shop, but the producer of algae-based care products, food or high-quality animal feed, to name a few examples. IDEA’s partners come from a range of different backgrounds: academics, SMEs, scientists. They will all bring their specific expertise to the project, in order to develop the algae value chain and to take it to a higher level, because there is demand for it, not least from the professional field.

Francis Kurz is a partner in the project with his company Algae Natural Food. “Above all, we need a high-quality product. The public opinion of spirulina is not especially positive in France, because we’ve been confronted with poor-quality products in the past. We need to change this. Microalgae are rich in proteins and vitamins, and can be used to produce high-quality fish food for aquaculture, for example. The entire sector is still being developed and the IDEA project is extremely important for the dissemination of knowledge.

Financiers want to have guarantees. This international grouping helps by enabling us to expand and reinforce our skills by means of collaboration. At the moment, we work with 16 people on 1.3 hectares. If the first industrial production of microalgae turns out to be successful, we have prospects to expand to 40 hectares globally. There is a bright perspective in the cultivation of Microalgae for a huge number of applications and markets.”

Various other companies are supporting the project as associated partners. They supply the vital biomass, for example, and in return they benefit from the network and the knowledge that is developed and shared here. One such example is the German company MIAL, which is working on the cultivation of algae for the food chain. Their unique selling point is the organic production that takes place entirely in Germany. Theodor Fahrendorf explains, “At the moment, we’re producing organically certified chlorella. In future, we want to start growing other algae too: types that are suitable for cold climates, of course.

The market is asking for 5 to 10 times more algae than we’re currently able to provide. Our greatest need at present is therefore to grow enough algae. From our participation in IDEA, we want to firstly gain insights into types of algae that are suitable for cultivation in Northwest Europe. Secondly, we also want to explore the market for high-quality end products. Because cultivating indiscriminately doesn’t work; we need to deliver the product where there is demand for it.”

Antwerp-based company Gova is also an associated partner in IDEA. “We’re looking for algae as a raw material for cosmetics”, Patrick Gonry explains. “We want to make products with algae that contain substances that are good for the skin, such as carotene and vitamin E. We’re currently getting these from plants, but that’s not sustainable, which is why we’re interested in algae. But at the moment, there’s not a single supplier that is able to provide us with algae that is suitable for cosmetic applications on a large scale. Our products are very sensitive to smell and colour. Algae that are not treated properly smell and turn brown after a few weeks. As such, they are of no use to us. We don’t want to grow our own algae. Hopefully, the IDEA project will help us find a supplier of high-quality algae, with whom we can build a sustainable relationship.”