Paleontologists are often working with just a small part of the puzzle. And sometimes, the piece fits differently according to who’s doing the puzzling.

That seems to be the case with a rare fossil specimen first discovered 70 years ago in Kansas’ Niobrara Formation—the only one of its kind. Since its discovery, the incomplete fossil has been twice misidentified, first as a plant and then as a cephalopod. Museum researchers recently reinterpreted it as a 70–85-million-year-old cartilaginous fish from the group which includes sharks and rays.

A manta ray swimming in the Flower Garden Banks National Marine Sanctuary in the Gulf of Mexico. 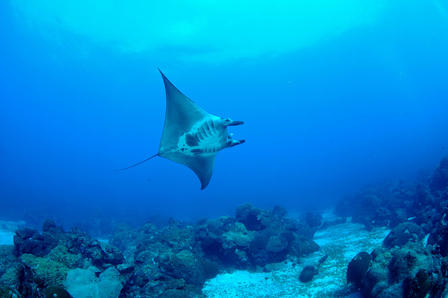 In the new study, led by Allison Bronson, a comparative biology Ph.D.-degree student in the Museum’s Richard Gilder Graduate School, Museum researchers re-examined the hard tissue of Platylithophycus cretaceum, debunking previous theories that the fossil slab was either a green alga or a cephalopod.

“There are many examples of temporarily misplaced taxa in paleontological history, including ferns that were once thought to be sponges and lungfish teeth thought to be fungi,” said Bronson. “In this case, the misidentification didn’t happen because of a lack of technology at the time—scientists familiar with cartilage structure could easily see this was a chondrichthyan fish. The researchers used reasonable arguments for their interpretations, but didn’t look outside of their own fields.”

Platylithophycus cretaceum was first described as an alga and later as squid. New research has found the specimen is most likely a cartilaginous fish. 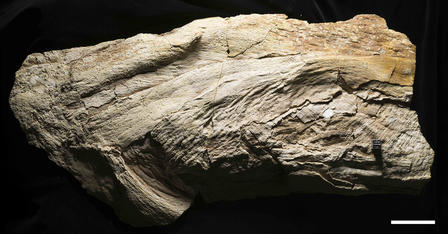 
The fossil specimen, which measures approximately 1.5 feet long by 10 inches wide, was first described by two paleobotanists from the Colorado School of Mines and Princeton University in 1948. The researchers identified the hexagonal plates that cover its surface as “fronds” from the calcium carbonate-covered filaments of a green alga. Twenty years later, in 1968, researchers from Fort Hays Kansas State College re-classified the specimen, this time as a cephalopod with similarities to a cuttlefish.

Bronson and co-author John Maisey, a curator in the Museum’s Division of Paleontology, tested the specimen with a small amount of dilute organic acid and determined that it was not composed of calcium carbonate. Rather, its hard tissue was calcium phosphate, the same material found in the fossilized skeletons of sharks and rays. Then, using an electron microscope, the researchers examined the specimen’s hexagonal plates, which they reinterpreted as tessellated calcified cartilage, most likely belonging to the fish’s supportive gill arches.

A high-magnification photo of the surface of the Platylithophycus cretaceusspecimen shows the tessellated calcified cartilage. 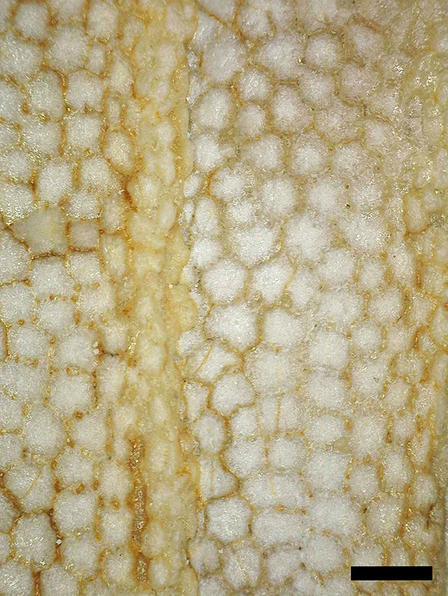 
“We think this was a rather large cartilaginous fish, possibly related to living filter-feeding rays such as Manta and Mobula,” said Maisey, who is a co-author on the paper. “This potentially expands the range of diversity in the Niobrara fauna.”

The Niobrara Formation, situated along what was once the Western Interior Seaway, is considered one of the most diverse fossil-fish sites in North America, especially for animals from the late Cretaceous.

But while Platylithophycus hails from this fossil-rich region, it remains the only specimen of its kind. Since the slab contains only preserved remnants of the animal’s gills, it will continue to be classified under its plant name until a more complete specimen is found.