Computer simulations of peregrine falcon attacks show that the extreme speeds reached during dives from high altitudes enhance the raptors' ability to execute maneuvers needed to nab agile prey that would otherwise escape. Robin Mills and colleagues of the University of Groningen, Netherlands, and Oxford University, UK, report this discovery in PLOS Computational Biology.

By attaching video cameras and GPS trackers on a Peregrine falcon, prior research by the team showed that falcons attack their prey using the same steering rules as man-made missiles. But it remained unknown why peregrine falcons choose to catch prey by diving from great heights at speeds faster than any other animal. Such risky behavior surely places extraordinary physical and cognitive demands on the falcon.

The image is a snapshot of the simulation in action. A stooping peregrine falcon (blue trajectory) is about to intercept a common starling (green trajectory) that maneuvers erratically to evade. 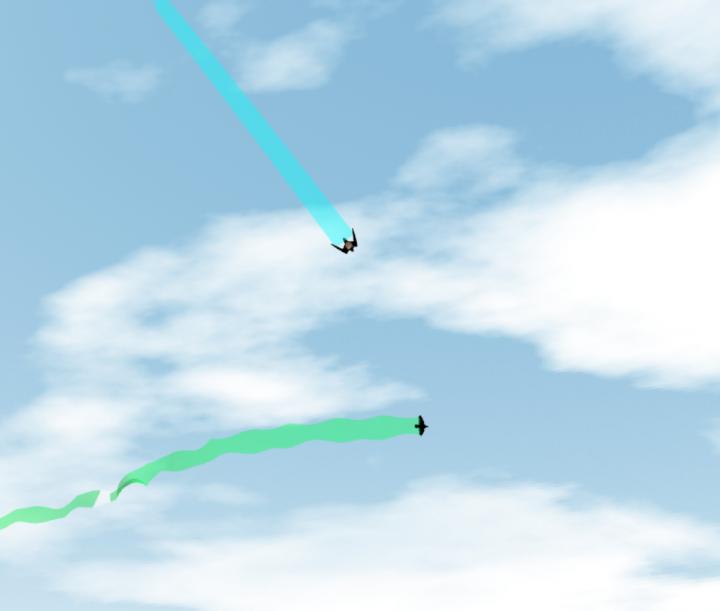 To investigate the peregrine's dive strategy, Mills and colleagues built a physics-based computer simulation of bird flight that pits falcons against prey. The simulation incorporates the aerodynamics of bird flight, how birds flap and tuck their wings, how falcons perceive their prey and react to it with delay and how falcons target their prey like a missile.

By running the simulation millions of times, varying the falcon's attack strategy each time, the researchers showed that high-speed dives enable peregrines to produce much higher aerodynamic forces for maneuvering, thereby maximizing their chance of seizing agile prey.

Still, the simulation showed, high-speed dives require very precisely tuned steering for a falcon to attack successfully, revealing that the stoop is a highly specialist hunting technique. The research team found that optimal tuning of the mathematical laws that control steering in the simulation corresponded closely to measurements of steering for real falcons.

The research team is now extending their simulation to explore why different raptor species, including the goshawk and the sparrow hawk, have unique attack strategies, and to identify why different raptors often specialize on different types of prey. They are also studying the best escape tactics that prey can employ to evade capture.


"Our simulations reveal why peregrines have evolved to dive from great heights, and at speeds faster than any other animal," Mills says. "Ultimately, we aim to understand the arms race between aerial predators and their prey that has led raptors to become some of the fastest and most agile animals on Earth."