A slippery rough surface (SRS) inspired by both pitcher plants and rice leaves outperforms state-of-the-art liquid-repellent surfaces in water harvesting applications, according to a team of researchers at Penn State and the University of Texas at Dallas.

"With an estimated 4 billion people living in a situation of water scarcity during at least some part of the year, an inexpensive method for harvesting water from water vapor or from fog droplets in air could have enormous practical applications, and will help alleviate the water scarcity issues in many regions of the world," said the project's leader, Tak-Sing Wong, who is the Wormley Family Early Career Professor in Engineering and assistant professor of mechanical engineering, Penn State.

In the image, the left panel is a directional slippery rough surface (SRS, this study), the middle panel is a slippery liquid-infused porous surface (SLIPS) and the right panel is a superhydrophobic surface. This image shows a comparison of water harvesting performance of SRS vs other state-of-the-art liquid repellent surfaces. 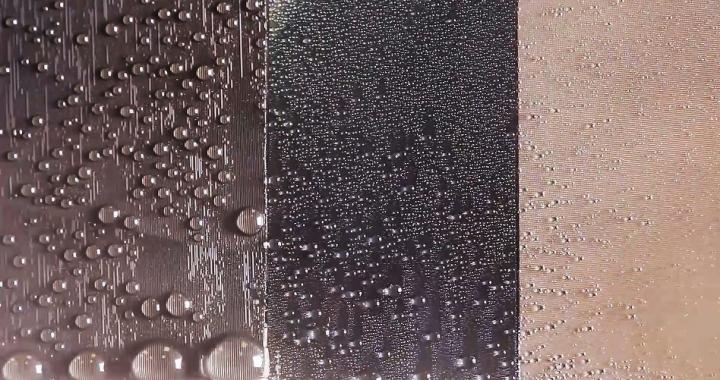 Many water-harvesting technologies are not as efficient, because when water is attracted to a hydrophilic surface, the water tends to form a sheet and clings to the surface, making it hard to remove. But Wong's post-doctoral scholar, Simon Dai, now an assistant professor at UT Dallas, was looking at combining different biological strategies to create a slippery solution for water harvesting.

"With SRS, we combined the slippery interface of a pitcher plant with the surface architecture of a rice leaf, which has micro/nanoscale directional grooves on its surface that allows water to be removed very easily in one direction but not the other," said Dai.

Dai developed a pitcher plant-inspired slippery surface with hydrophilic chemistry. At the same time, he added the directional grooves and gave the new surface a microscale roughness that increased the surface area. The rate of water and fog harvesting are directly proportional to the amount of surface area on which droplets can form. The rice leaf-inspired grooves whisk the water droplets away through capillary action or gravity.

Through experiments carried out at Penn State, the team showed that these surfaces can collect tiny water droplets from air at a rate faster than many state-of-the-art surfaces. Molecular dynamics simulations carried out at UT Dallas by Dai's colleague, Steven Nielson, explained why the hydrophilic surface was particularly good at water harvesting.

"If the SRS material is produced at scale, we estimate that we can collect over 120 liters of water per square meter of the surface per day, and we can further increase the water harvesting rate by optimizing the SRS," said Nan Sun, graduate student in Wong's group and coauthor of the paper, titled "Hydrophilic Directional Rough Surfaces for Water Harvesting."

Wong's team is currently working on optimizing and scaling up the SRS with the goal to create highly efficient water harvesting systems for providing clean water in water scarcity regions.