Scientists have identified a new species of reptile from prehistoric Connecticut and, boy, does it have a mouth on it.

“Colobops would have been a diminutive but plucky little beast, part of a little-known menagerie of small animals that lived among the first dinosaurs,” said Bhart-Anjan Bhullar, assistant professor and assistant curator in geology and geophysics at Yale, and senior author of a new paper about the discovery in the journal Nature Communications.

An artist’s rendering of Colobops noviportensis, a new species of reptile from prehistoric Connecticut. 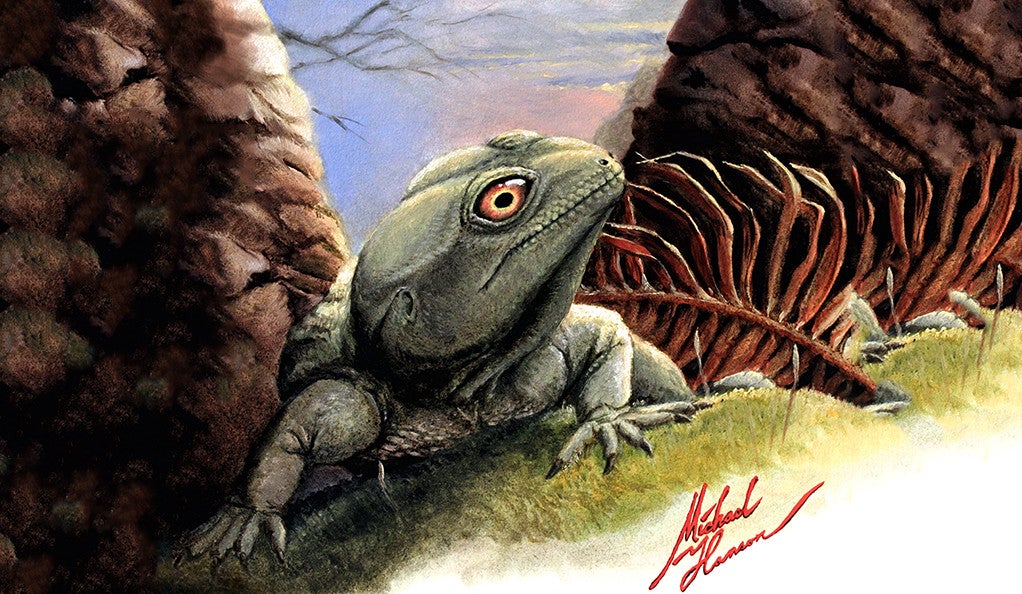 “Its tiny frame hid some big secrets,” Bhullar said. “Despite its lizard-like aspect, it is in fact an early branch-off of the lineage leading to dinosaurs and birds. Also, its little jaws could bite harder than anything else its size. Perhaps that big bite allowed it to feed on tough, armored prey impervious to weaker mouths.”

“This project was a great example of the process of science,” Pritchard said. “The skull was initially discovered in the mid-1960s. In the 1990s, the skull was subject to initial study in which it was identified as a cousin of a modern lizard-like reptile called a tuatara. Our study ups the ante again, using advanced CT scanning and 3D modeling to reveal all kinds of new features of the skull. The features are very distinctive, allowing us to establish a new species.” 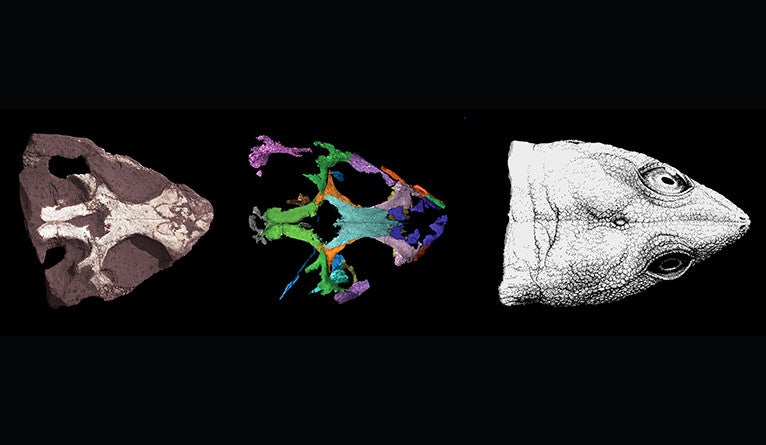 The specimen is a quarter-sized skull discovered in Meriden, Conn., during roadwork in 1965. It has been part of the collections of the Yale Peabody Museum of Natural History for decades. The specimen’s new species name derives from Novus Portus, a Latinized version of New Haven — a reference to the New Haven Arkose geological formation.

The Yale team took a new look at the specimen. The researchers did a 3D reconstruction of the skull and discovered that it showed specialization in the jaw that was unprecedented in any other known small tetrapod, juvenile or adult.

“Comparisons with modern reptile dissections showed that it had incredibly well-developed jaw muscles for its size, suggesting an exceptional bite, even compared to the diversity of modern reptiles,” Pritchard said. “It’s a great illustration of the critical importance of fossils big and small for understanding the diversity of organisms.”

The researchers said the discovery means modern vertebrates originated in a world that was already populated by small and large-bodied physical extremes, in terms of how animals physically adapted to their environment.

The National Science Foundation and the Yale Peabody Museum of Natural History supported the research.

Related
Scientists track the brain-skull: ransition from dinosaurs to birds
Tweaking the beak: Retracing the bird’s beak to its dinosaur origins, in the laboratory
Yale researchers identify ‘missing-link snake’
on March 23, 2018