The elaborate frills and horns of a group of dinosaurs including Triceratops and Styracosaurus did not evolve to help species recognize each other, according to researchers at Queen Mary University of London.

It has been suggested that different species that live in the same location may evolve features in order to distinguish one another to help avoid problems such as hybridisation, where two individuals of different species produce infertile or unfit offspring.

To test this hypothesis the researchers examined patterns of diversity in the ornamentation of 46 species of ceratopsians, the horned dinosaurs, but found no difference between species that lived together and those that lived separately.

This is the Protoceratops in the Horniman Museum, London. 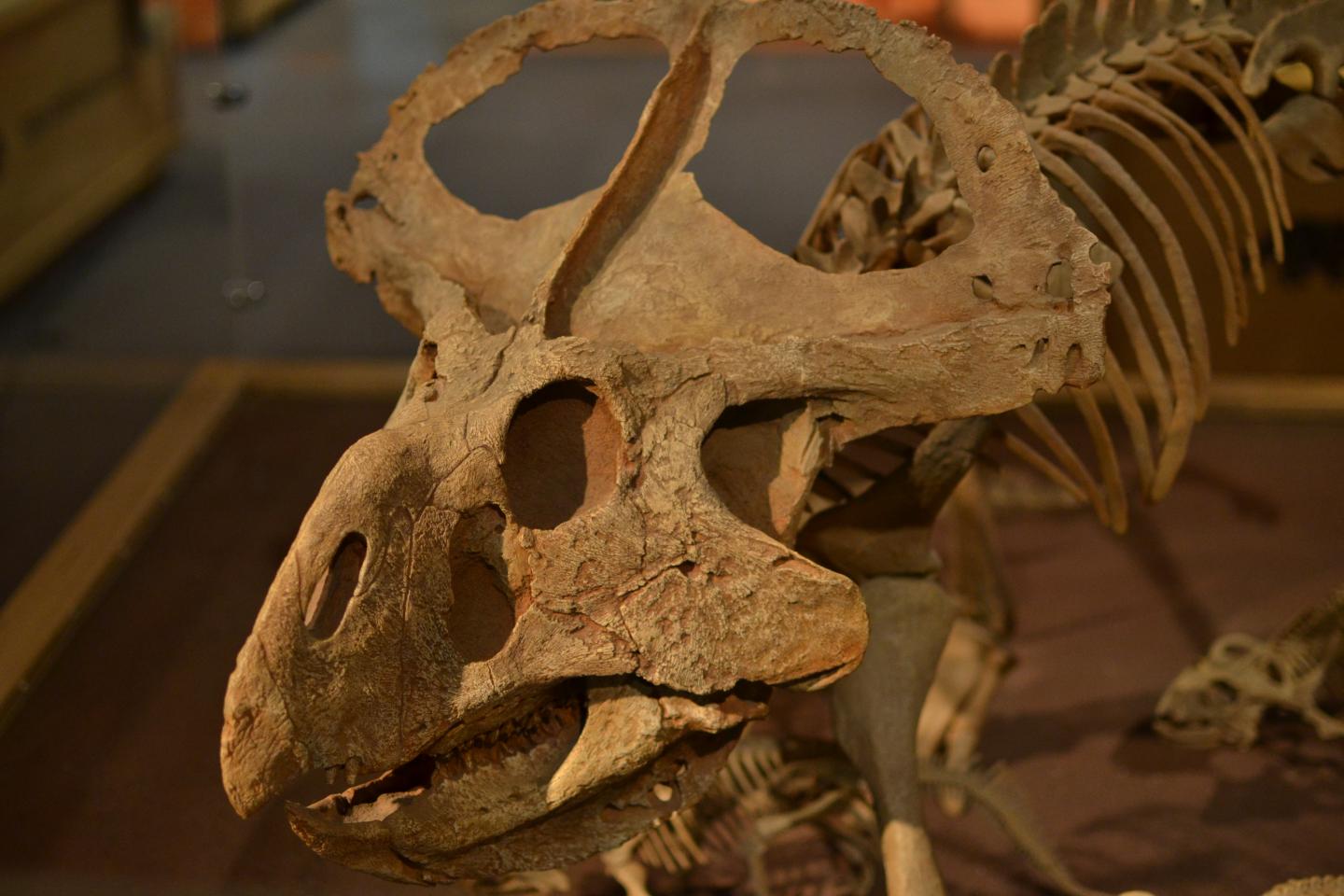 A previous research paper from Queen Mary found that the frill in one ceratopsian species, Protoceratops, may have evolved under sexual selection. These new findings appear to add evidence to this across the entire group.

The researchers also found evidence that ornamental traits seemed to evolve at a much faster rate than other traits. As these structures are costly to grow and maintain, this finding similarly points to a strong selective pressure on these traits.

The study was published in Proceedings of the Royal Society B.

Andrew Knapp, PhD candidate from the School of Biological and Chemical Sciences and lead author of the study, said: "This resolves a long-standing and hitherto untested hypothesis concerning the origin and function of ornamental traits in ceratopsian dinosaurs. Many general discussions of ceratopsian ornaments in museum signage and popular literature often include examples of what they might have been for, but these tend to be rather speculative.

This is the restoration of the head of Nasutoceratops (copyright Andrey Atuchin). 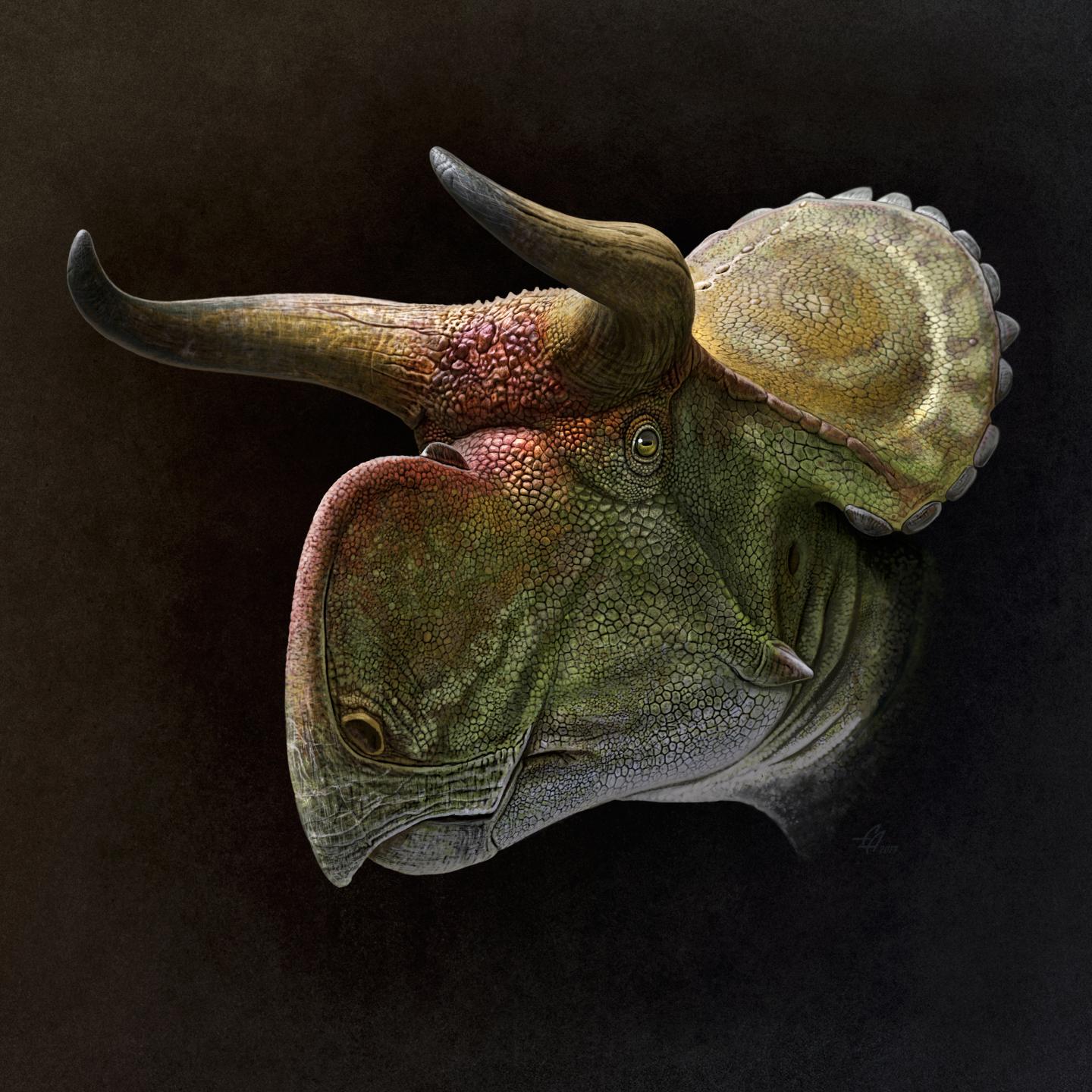 We have shown that species recognition, one of the commonest explanations, is unlikely to be responsible for the diversity or origin of ornamentation in this group."

The researchers believe the implications extend beyond the scope of ceratopsians and have consequences for the study of evolutionary theory over vast stretches of time.

The fossil record offers an opportunity to see evolution in action over much longer time periods than can be achieved with living organisms, but it is difficult to assign explanations to unusual features such as ceratopsian ornaments with the limited information that fossils provide.

The researchers have now largely ruled out one explanation, species recognition, and provided some evidence for another, sexual selection.

This is the Chasmosaurus skeleton in the Royal Tyrrell Museum of Paleontology. 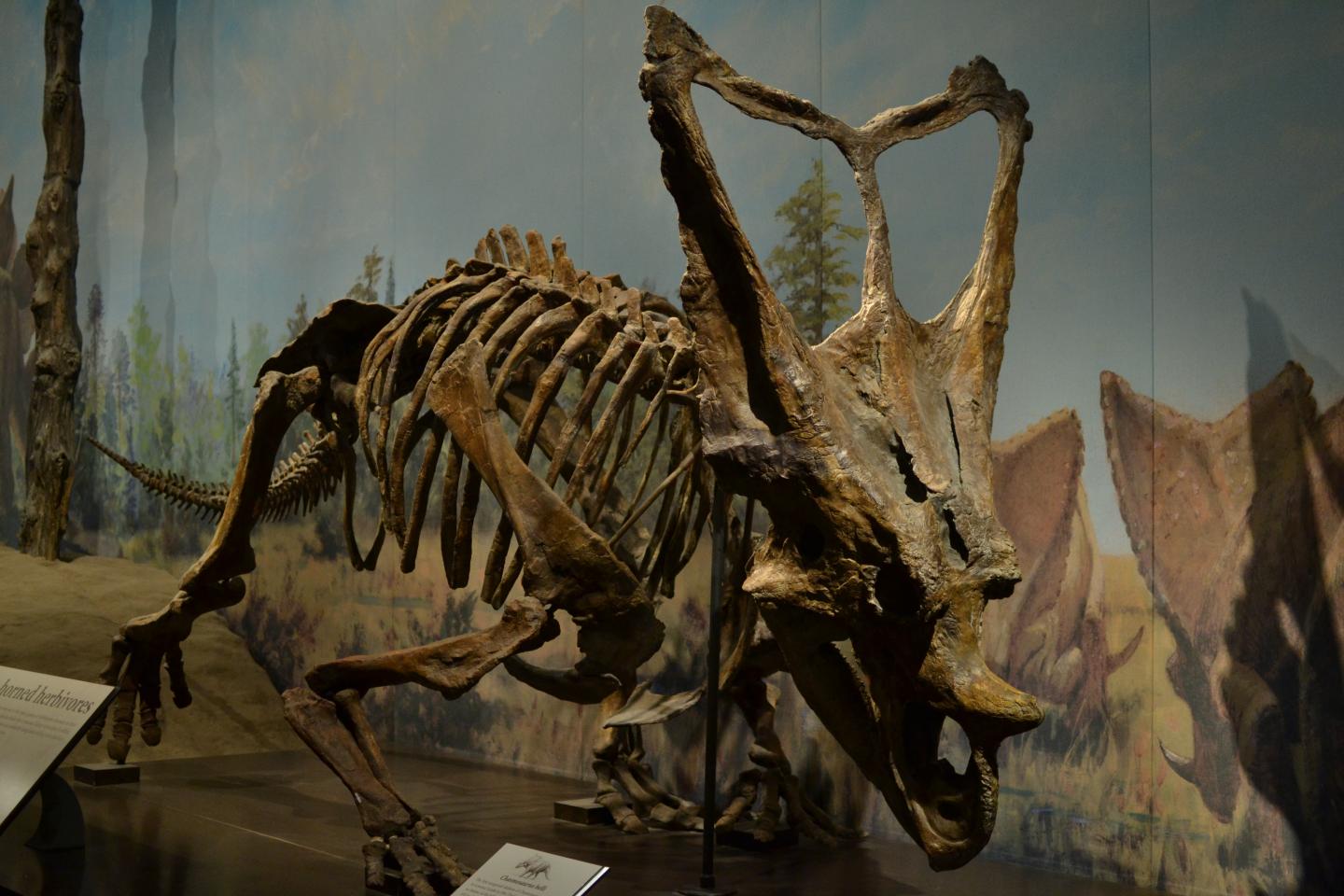 
Mr Knapp said: "If sexual selection is indeed the driver of ornament evolution in ceratopsians, as we are increasingly confident it is, demonstrating it through different lines of evidence can provide a crucial window into tracing its effects over potentially huge timescales."

He added: "Modern computer models have suggested that sexual selection can promote rapid speciation, adaptation, and extinction. In our world of increasing pressure on the natural world, these predictions may have important consequences for conservation and the fate of living things everywhere."

To test these predictions the researchers hope to look at changes in the fossil record and gather further evidence to first identify sexual selection in a fossil group.