An international team of researchers including Dmitry Ivanov, the head of laboratory of functional soft-matter systems, MSU, announced the development of a synthetic chameleon skin. Similar to its biological analogue, the synthetic skin reacts to mechanical stimuli by changing its stiffness and color. The scientists see their development as quite promising. The work was published in the recent issue of the Science journal.

Having worked in academic institutions in Europe for 25 years, Dmitry Ivanov founded a laboratory of functional soft-matter systems at the Faculty of Physical and Chemical Engineering, MSU. To take the direction of the new laboratory, he left the direction of a French Institute of Materials Sciences operating under the French National Center for Scientific Research. Today Dmitry Ivanov actively involves his Moscow colleagues into international projects, one of which is the development of the chameleon skin.

Naturally, this is not exactly skin and it doesn't belong to a chameleon. The scope of the development is active camouflage, although camouflaging is not the only property of this novel material. Generally, chameleon is not the only animal able to change the colour of its skin depending on its state. The means of active camouflage are also used by some cephalopods and amphibians.

This is a synthetic chameleon skin. 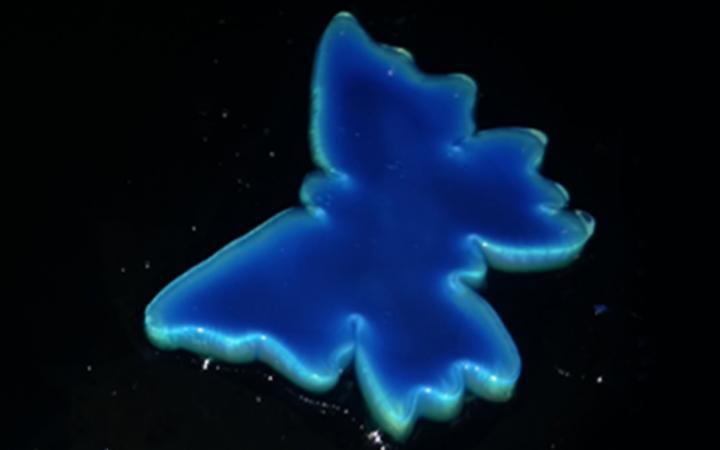 In addition, under external mechanical stimuli their soft skin quickly becomes stiff to prevent premature rupture. Scientists have been trying for a long time to create synthetic materials with similar properties, however all polymers that have been developed by now showed by far smaller changes in mechanical stiffness under deformation than living tissues. As for a material that could stiffen under stretching and change colour at the same time, no one dared even dream about it. Still, now it exists.

The development of the team is based on the so-called copolymers, i.e. polymers that consist of several different constituent parts. According to Dmitry Ivanov, the copolymer created by the authors of the article is substantially different from conventional linear macromolecules. The new macromolecule resembles a dumbbell with a hairy hand. The center of the construct is formed by an element with densely grafted branches that looks like a bottle brush. What is interesting about such a molecular brush initially developed in the USA, some years ago, is that the macromolecular backbone with branches is very stiff. A material consisting of such brushes may be initially quite soft but rapidly stiffens upon deformation.

Moreover, the new polymers are capable of molecular self-assembly -- a property that is being actively studied in Ivanov's Moscow lab. In certain conditions such a system is able to assemble into a complex hierarchical structure from the basic elements -- macromolecules. The final structure will have completely different characteristics than the basic elements in the initial non-organized state. During this process, nanometer-sized particles transform into a material with targeted properties and functionality.

The international team of researchers participating in this project was the first to code all properties required for practical use (e.g., the full stress-strain curve) in the molecular structure of such polymers. The whole deformation behavior may be coded in a specific way to make it completely identical to that of the living tissues. Among the prospects opened by this material Dmitry Ivanov emphasizes its use in medicine, in particular in the manufacture of biological implants where it will eliminate the issue of mechanical inconsistency. Each biological implant should have mechanical properties very similar to those of surrounding tissues, otherwise the patient may be hurt. The figure shows sample stress-strain curves of pig skin compared to those of the developed polymers. One can see that the new materials reproduce the mechanical properties of living skin with high accuracy.

Another important element of the synthesized molecular dumbbells are their end pieces. In the course of self-assembly they form nanosized spheres creating an active camouflage effect, as the distances between the spheres satisfy the conditions for diffraction of visible light. Mechanical deformation of such a structure changes the conditions of diffraction and results in a blue shift of the iridescent sample colour. Therefore, the new materials can reproduce not only the stress-strain curves of living tissues but also their coloration created by a purely physical phenomenon - light diffraction.

Ivanov explains: "Our materials may be programmed to cover a wide range of mechanical and colour characteristics. The only thing you have to do is set out the necessary structural parameters of the molecular "brushes". This approach is similar to coding our hereditary information in DNA strands."