In the future, body tight clothing may change colors like a chameleon 's skin as an athlete, dancer or consumer moves.

Now an international team has managed to produce a biocompatible synthetic material that replicates tissue mechanics and alters color when it changes shape, like chameleon skin. These results, to which researchers from CNRS, Université de Haute-Alsace1 and ESRF, the European Synchrotron, have contributed with colleagues in the US (University of North Carolina at Chapel Hill, University of Akron), are published on March 30, 2018 in Science. They promise new materials for biomedical devices.

To produce a medical implant, we need to select materials with similar mechanical properties to those in biological tissues, so as to mitigate inflammation or necrosis. A number of tissues including the skin, the intestinal wall, and the heart muscle, have the particularity of being soft yet stiffening when they are stretched. Until now, it has been impossible to reproduce this behavior with synthetic materials.

Bottom – left: stress-strain curves for plastomers (“M300-2” and “M300-3”) that mimic the mechanical behavior of pig skin samples (“porcine”, in transversal or longitudinal cross-section); right: image showing the iridescent color of the plastomers. The edges are less blue because they receive the light at a different angle. 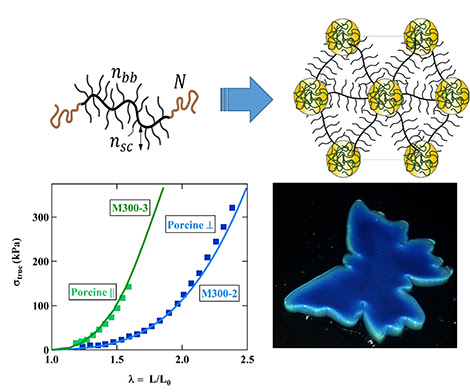 The researchers have attempted to achieve this with a unique triblock copolymer2. They have synthesized a physically cross-linked elastomer composed of a central block onto which side chains are grafted (like a bottle brush) and with linear terminal blocks at each end (See figure). The researchers have found that by carefully selecting the polymer's structural parameters, the material followed the same strain curve as a biological tissue, in this case pig skin. It is also biocompatible, since it does not require additives, e.g. solvent, and remains stable in the presence of biological fluids.

Another property of the material appeared during the experiments: its color change upon deformation. As the scientists have shown, this is a purely physical phenomenon, which is caused by light scattering from the polymer structure. Atomic force microscopy and X-ray diffraction experiments have shown that the terminal blocks of these polymers assemble in nanometer spheres, distributed in a brush-polymer matrix. Light interferes with this microphase-separated structure to produce color according to the distance between the spheres; so when the material is stretched it changes color. It is the same mechanism that explains – in large part – how chameleons change color.

The researchers have therefore succeeded in encoding in a unique synthetic polymer both mechanical properties (flexibility, strain profile) and optical properties, which had never previously been achieved. By adjusting the length or density of the “brush's” various side chains, these properties can be modulated. This discovery could lead to medical implants or more personalized prostheses (vascular implants, intraocular implants, replacement of intervertebral discs), and also to materials with completely new strain profiles, and applications that have not yet been imagined.