Fabric Generates Electricity When Stretched or Deformed Even When Wet

Working up a sweat from carrying a heavy load? That is when the textile works at its best. Researchers at Chalmers University of Technology have developed a fabric that converts kinetic energy into electric power, in cooperation with the Swedish School of Textiles in Borås and the research institute Swerea IVF. The greater the load applied to the textile and the wetter it becomes the more electricity it generates. The results are now published in the Nature Partner journal Flexible Electronics.

Chalmers researchers Anja Lund and Christian Müller have developed a woven fabric that generates electricity when it is stretched or exposed to pressure. The fabric can currently generate enough power to light an LED, send wireless signals or drive small electric units such as a pocket calculator or a digital watch.

Anja Lund with a piece of the electric textile in the shoulder strap of a bag (the lighter-coloured part). To the right: a LED that flashes because electricity is generated when the textile is stretched.


The technology is based on the piezoelectric effect, which results in the generation of electricity from deformation of a piezoelectric material, such as when it is stretched. In the study the researchers created a textile by weaving a piezoelectric yarn together with an electrically conducting yarn, which is required to transport the generated electric current.

“The textile is flexible and soft and becomes even more efficient when moist or wet,” Lund says. “To demonstrate the results from our research we use a piece of the textile in the shoulder strap of a bag. The heavier the weight packed in the bag and the more of the bag that consists of our fabric, the more electric power we obtain. When our bag is loaded with 3 kilos of books, we produce a continuous output of 4 microwatts. That’s enough to intermittently light an LED. By making an entire bag from our textile, we could get enough energy to transmit wireless signals.”

The piezoelectric yarn is made up of twenty-four fibres, each as thin as a strand of hair. When the fibres are sufficiently moist they become enclosed in liquid and the yarn becomes more efficient, since this improves the electrical contact between the fibres. The technology is based on previous studies by the researchers in which they developed the piezoelectric fibres, to which they have now added a further dimension.

During manufacture the fabric is exposed to a high electric field, which causes positive and negative charges in the polymer to be separated in an organized manner. 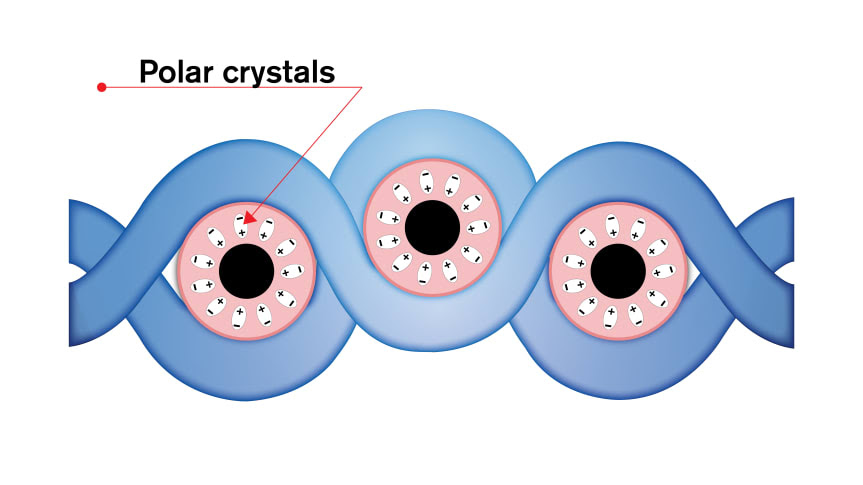 Previous work by the researchers on piezoelectric textiles has so far mainly focused on sensors and their ability to generate electric signals through pressure sensitivity. Using the energy to continuously drive electronic components is unique.

“Woven textiles from piezoelectric yarns makes the technology easily accessible and it could be useful in everyday life. It’s also possible to add more materials to the weave or to use it as a layer in a multi-layer product. It requires some modification, but it’s possible,” Lund says.

When the textile is stretched or exposed to pressure, the deformation of the piezoelectric fibres (pink) causes a reorganisation of the charge distribution, thus generating an electrical voltage. The electrically conducting yarn (blue) is required to form a closed circuit. A piezoelectric yarn is made up of 24 fibres as thin as a hair, and each fibre has an electrically conducting core (black).
Credit: Chalmers University of Technology

The researchers consider that the technology is, in principle, ready for larger scale production. It is now mainly up to industrial product developers to find out how to make use of the technology. Despite the advanced technology underlying the material, the cost is relatively low and is comparable with the price of Gore-Tex. Through their collaboration with the Swedish School of Textiles in Borås the researchers have been able to demonstrate that the yarn can be woven in industrial looms and is sufficiently wear-resistant to cope with the harsh conditions of mass production.

More about: The research
The paper Energy harvesting textiles for a rainy day: woven piezoelectrics based on melt-spun PVDF microfibres with a conducting core is published in the Nature Partner journal Flexible Electronics 22 March.

The research has been funded by the Swedish Foundation for Strategic Research (SSF), the Knut and Alice Wallenberg Foundation, and the European Research Council (ERC).