Water on the Moon May Be Widespread and Immobile

A new analysis of data from two lunar missions finds evidence that the Moon's water is widely distributed across the surface and is not confined to a particular region or type of terrain. The water appears to be present day and night, though it's not necessarily easily accessible.

The findings could help researchers understand the origin of the Moon's water and how easy it would be to use as a resource. If the Moon has enough water, and if it's reasonably convenient to access, future explorers might be able to use it as drinking water or to convert it into hydrogen and oxygen for rocket fuel or oxygen to breathe.

"We find that it doesn't matter what time of day or which latitude we look at, the signal indicating water always seems to be present," said Joshua Bandfield, a senior research scientist with the Space Science Institute in Boulder, Colorado, and lead author of the new study published in Nature Geoscience. "The presence of water doesn't appear to depend on the composition of the surface, and the water sticks around."

If the Moon has enough water, and if it's reasonably convenient to access, future explorers might be able to use it as a resource. 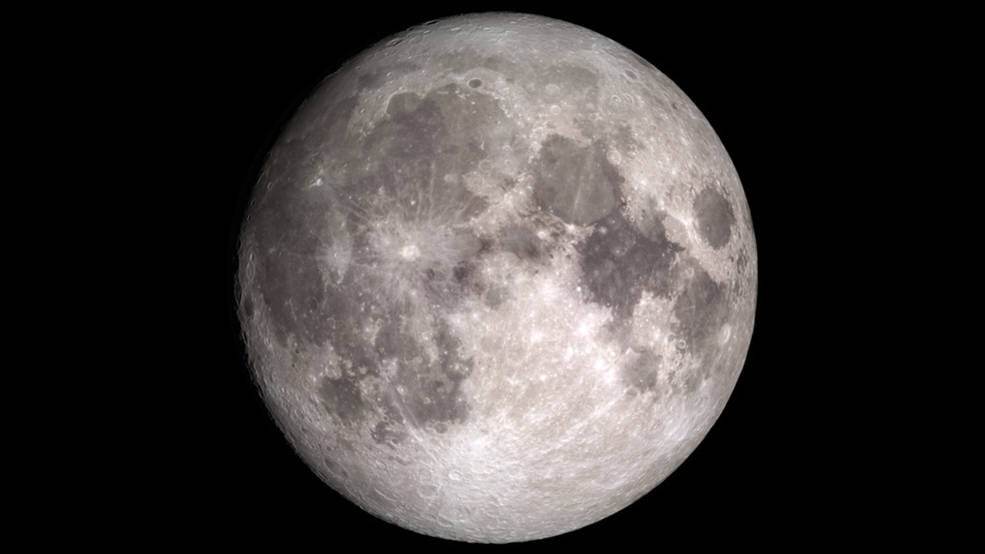 
The results contradict some earlier studies, which had suggested that more water was detected at the Moon's polar latitudes and that the strength of the water signal waxes and wanes according to the lunar day (29.5 Earth days). Taking these together, some researchers proposed that water molecules can "hop" across the lunar surface until they enter cold traps in the dark reaches of craters near the north and south poles. In planetary science, a cold trap is a region that's so cold, the water vapor and other volatiles which come into contact with the surface will remain stable for an extended period of time, perhaps up to several billion years.

The debates continue because of the subtleties of how the detection has been achieved so far. The main evidence has come from remote-sensing instruments that measured the strength of sunlight reflected off the lunar surface. When water is present, instruments like these pick up a spectral fingerprint at wavelengths near 3 micrometers, which lies beyond visible light and in the realm of infrared radiation.

But the surface of the Moon also can get hot enough to "glow," or emit its own light, in the infrared region of the spectrum. The challenge is to disentangle this mixture of reflected and emitted light. To tease the two apart, researchers need to have very accurate temperature information.

Bandfield and colleagues came up with a new way to incorporate temperature information, creating a detailed model from measurements made by the Diviner instrument on NASA's Lunar Reconnaissance Orbiter, or LRO. The team applied this temperature model to data gathered earlier by the Moon Mineralogy Mapper, a visible and infrared spectrometer that NASA's Jet Propulsion Laboratory in Pasadena, California, provided for India's Chandrayaan-1 orbiter.

The new finding of widespread and relatively immobile water suggests that it may be present primarily as OH, a more reactive relative of H2O that is made of one oxygen atom and one hydrogen atom. OH, also called hydroxyl, doesn't stay on its own for long, preferring to attack molecules or attach itself chemically to them. Hydroxyl would therefore have to be extracted from minerals in order to be used.

The research also suggests that any H2O present on the Moon isn't loosely attached to the surface.

"By putting some limits on how mobile the water or the OH on the surface is, we can help constrain how much water could reach the cold traps in the polar regions," said Michael Poston of the Southwest Research Institute in San Antonio, Texas.

Sorting out what happens on the Moon could also help researchers understand the sources of water and its long-term storage on other rocky bodies throughout the solar system.

The researchers are still discussing what the findings tell them about the source of the Moon's water. The results point toward OH and/or H2O being created by the solar wind hitting the lunar surface, though the team didn't rule out that OH and/or H2O could come from the Moon itself, slowly released from deep inside minerals where it has been locked since the Moon was formed.

"Some of these scientific problems are very, very difficult, and it's only by drawing on multiple resources from different missions that are we able to hone in on an answer," said LRO project scientist John Keller of NASA's Goddard Space Flight Center in Greenbelt, Maryland.