For the first four billion years of Earth's history, our planet's continents would have been devoid of all life except microbes.

All of this changed with the origin of land plants from their pond scum relatives, greening the continents and creating habitats that animals would later invade.

The timing of this episode has previously relied on the oldest fossil plants which are about 420 million years old.

New research, published today in the journal Proceedings of the National Academy of Sciences USA, indicates that these events actually occurred a hundred million years earlier, changing perceptions of the evolution of the Earth's biosphere. 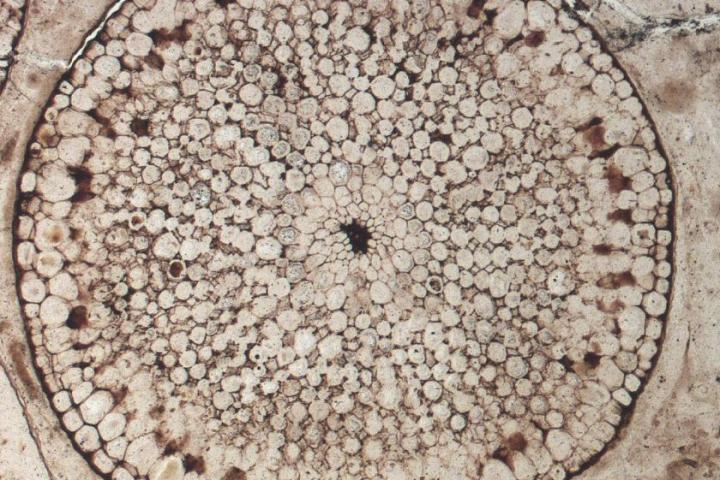 Plants are major contributors to the chemical weathering of continental rocks, a key process in the carbon cycle that regulates Earth's atmosphere and climate over millions of years.

The team used 'molecular clock' methodology, which combined evidence on the genetic differences between living species and fossil constraints on the age of their shared ancestors, to establish an evolutionary timescale that sees through the gaps in the fossil record.

Dr Jennifer Morris, from the University of Bristol's School of Earth Sciences and co-lead author on the study, explained: "The global spread of plants and their adaptations to life on land, led to an increase in continental weathering rates that ultimately resulted in a dramatic decrease the levels of the 'greenhouse gas' carbon dioxide in the atmosphere and global cooling.

Early life on land resembled cryptogamic ground covers like this lava field in Iceland. Co-author Sylvia Pressel appears in the right of the picture. 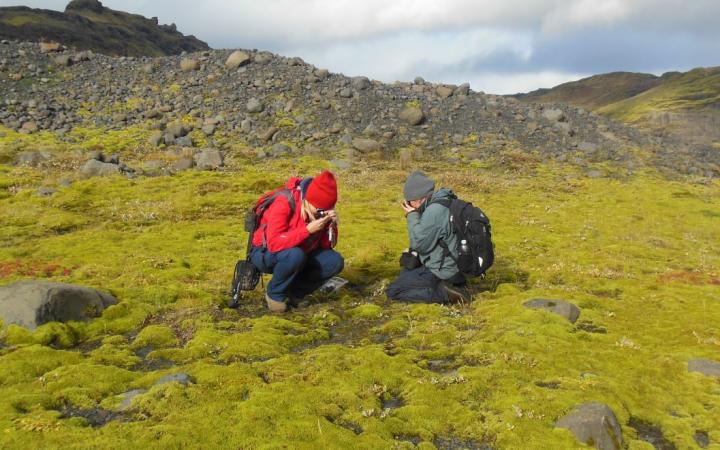 "Previous attempts to model these changes in the atmosphere have accepted the plant fossil record at face value - our research shows that these fossil ages underestimate the origins of land plants, and so these models need to be revised."

Co-lead author Mark Puttick described the team's approach to produce the timescale. He said: "The fossil record is too sparse and incomplete to be a reliable guide to date the origin of land plants. Instead of relying on the fossil record alone, we used a 'molecular clock' approach to compare differences in the make-up of genes of living species - these relative genetic differences were then converted into ages by using the fossil ages as a loose framework.

Cooksonia pertoni collected by co-author Dianne Edwards from the type locality (Pridoli). It is about 12mm high. It was first published in Palaeontology Vol 22 Edwards 1979 plate 4 fig13. It is now housed in the National Museum, Wales. 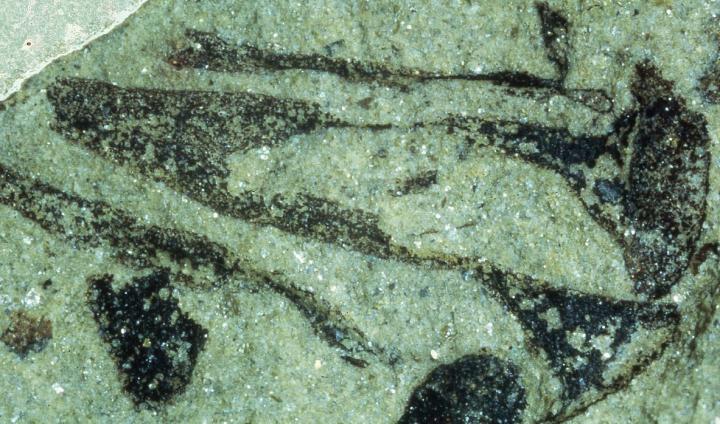 "Our results show the ancestor of land plants was alive in the middle Cambrian Period, which was similar to the age for the first known terrestrial animals."

One difficulty in the study is that the relationships between the earliest land plants are not known. Therefore the team, which also includes members from Cardiff University and the Natural History Museum, London, explored if different relationships changed the estimated origin time for land plants.

Leaders of the overall study, Professor Philip Donoghue and Harald Schneider added: "We used different assumptions on the relationships between land plants and found this did not impact the age of the earliest land plants.

"Any future attempts to model atmospheric changes in deep-time must incorporate the full range of uncertainties we have used here."