New Origin Story for the Moon

A new explanation for the Moon's origin has it forming inside the Earth when our planet was a seething, spinning cloud of vaporized rock, called a synestia. The new model led by researchers at the University of California, Davis and Harvard University resolves several problems in lunar formation and is published Feb. 28 in the Journal of Geophysical Research - Planets.

"The new work explains features of the Moon that are hard to resolve with current ideas," said Sarah Stewart, professor of Earth and Planetary Sciences at UC Davis. "The Moon is chemically almost the same as the Earth, but with some differences," she said. "This is the first model that can match the pattern of the Moon's composition."

Current models of lunar formation suggest that the Moon formed as a result of a glancing blow between the early Earth and a Mars-size body, commonly called Theia. According to the model, the collision between Earth and Theia threw molten rock and metal into orbit that collided together to make the Moon.

This artist's rendering shows the hot, molten Moon emerging from a synestia, a giant spinning donut of vaporized rock that formed when planet-sized objects collided. The synestia is in the process of condensing to form the Earth. This new model for the Moon's origin answers outstanding questions about how the Moon's composition compares to that of Earth. 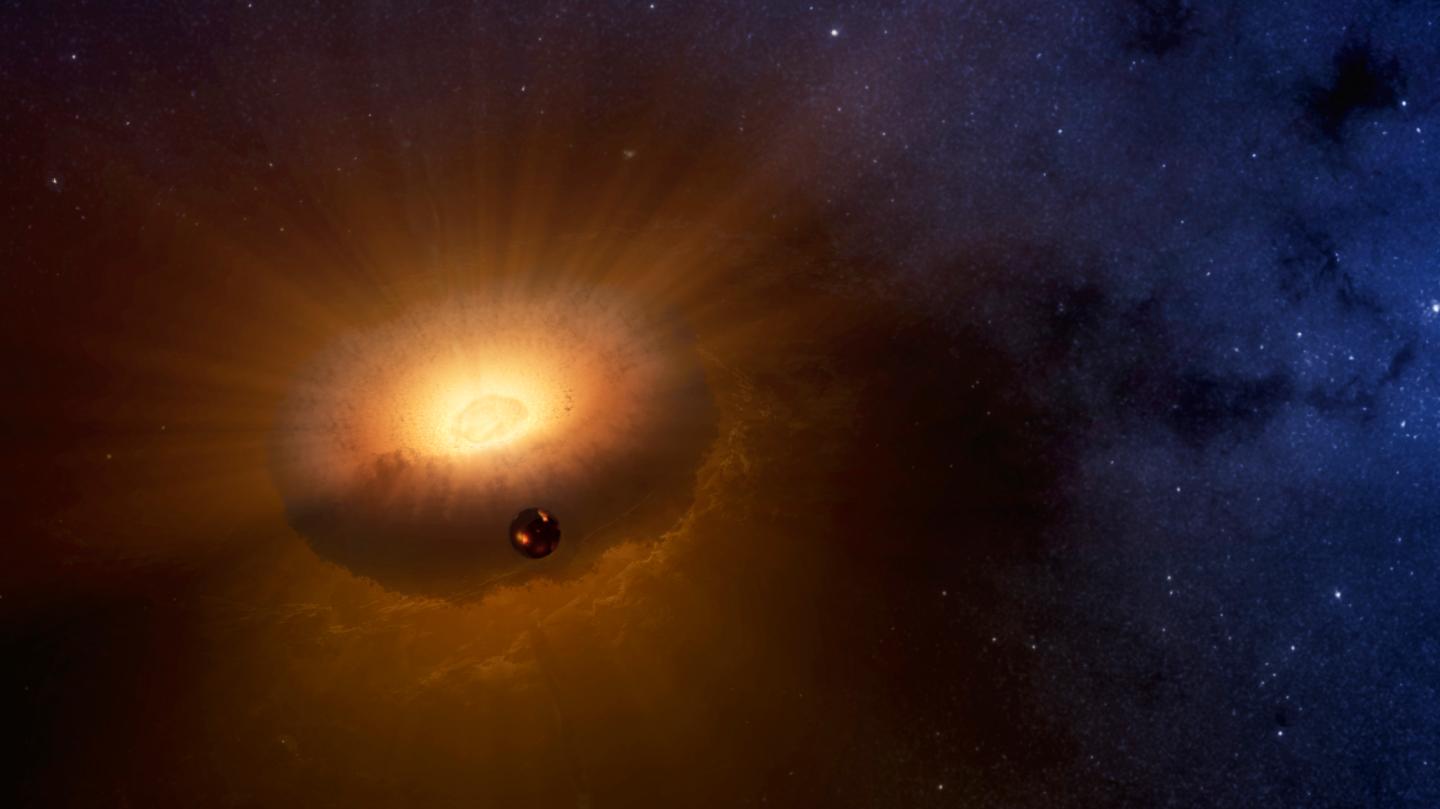 Image by Sarah Stewart/UC Davis based on NASA rendering.

The new theory relies instead on a synestia, a new type of planetary object proposed by Stewart and Simon Lock, graduate student at Harvard and visiting student at UC Davis, in 2017. A synestia forms when a collision between planet-sized objects results in a rapidly spinning mass of molten and vaporized rock with part of the body in orbit around itself. The whole object puffs out into a giant donut of vaporized rock.

Synestias likely don't last long - perhaps only hundreds of years. They shrink rapidly as they radiate heat, causing rock vapor to condense into liquid, finally collapsing into a molten planet.

"Our model starts with a collision that forms a synestia," Lock said. "The Moon forms inside the vaporized Earth at temperatures of four to six thousand degrees Fahrenheit and pressures of tens of atmospheres."

An advantage of the new model, Lock said, is that there are multiple ways to form a suitable synestia - it doesn't have to rely on a collision with the right sized object happening in exactly the right way.

Once the Earth-synestia formed, chunks of molten rock injected into orbit during the impact formed the seed for the Moon. Vaporized silicate rock condensed at the surface of the synestia and rained onto the proto-Moon, while the Earth-synestia itself gradually shrank. Eventually, the Moon would have emerged from the clouds of the synestia trailing its own atmosphere of rock vapor. The Moon inherited its composition from the Earth, but because it formed at high temperatures it lost the easily vaporized elements, explaining the Moon's distinct composition.

Additional authors on the paper are Michail Petaev and Stein Jacobsen at Harvard University, Zoe Leinhardt and Mia Mace at the University of Bristol, England and Matija Cuk, SETI Institute, Mountain View, Calif. The work was supported by grants from NASA, the U.S. Department of Energy and the UK's Natural Environment Research Council.