Scientists have found the first major evidence that Neanderthals, rather than modern humans, created the world's oldest known cave paintings - suggesting they may have had an artistic sense similar to our own.

A new study led by the University of Southampton and the Max Planck Institute for Evolutionary Anthropology shows that paintings in three caves in Spain were created more than 64,000 years ago - 20,000 years before modern humans arrived in Europe.

This means that the Palaeolithic (Ice Age) cave art - including pictures of animals, dots and geometric signs - must have been made by Neanderthals, a 'sister' species to Homo sapiens, and Europe's sole human inhabitants at the time.

It also indicates that they thought symbolically, like modern humans.

Panel 3 in Maltravieso Cave showing 3 hand stencils (centre right, centre top and top left). One has been dated to at least 66,000 years ago and must have been made by a Neanderthal (colour enhanced).


Published today in the journal Science, the study reveals how an international team of scientists used a state-of-the-art technique called uranium-thorium dating to fix the age of the paintings as more than 64,000 years.

Until now, cave art has been attributed entirely to modern humans, as claims to a possible Neanderthal origin have been hampered by imprecise dating techniques. However, uranium-thorium dating provides much more reliable results than methods such as radiocarbon dating, which can give false age estimates.

The uranium-thorium method involves dating tiny carbonate deposits that have built up on top of the cave paintings. These contain traces of the radioactive elements uranium and thorium, which indicate when the deposits formed - and therefore give a minimum age for whatever lies beneath.

Joint lead author Dr Chris Standish, an archaeologist at the University of Southampton, said: "This is an incredibly exciting discovery which suggests Neanderthals were much more sophisticated than is popularly believed.

"Our results show that the paintings we dated are, by far, the oldest known cave art in the world, and were created at least 20,000 years before modern humans arrived in Europe from Africa - therefore they must have been painted by Neanderthals."

Panel 78 in La Pasiega. The scalariform (ladder shape) composed of red horizontal and vertical lines dates to older than 64,000 years and was made by Neanderthals. 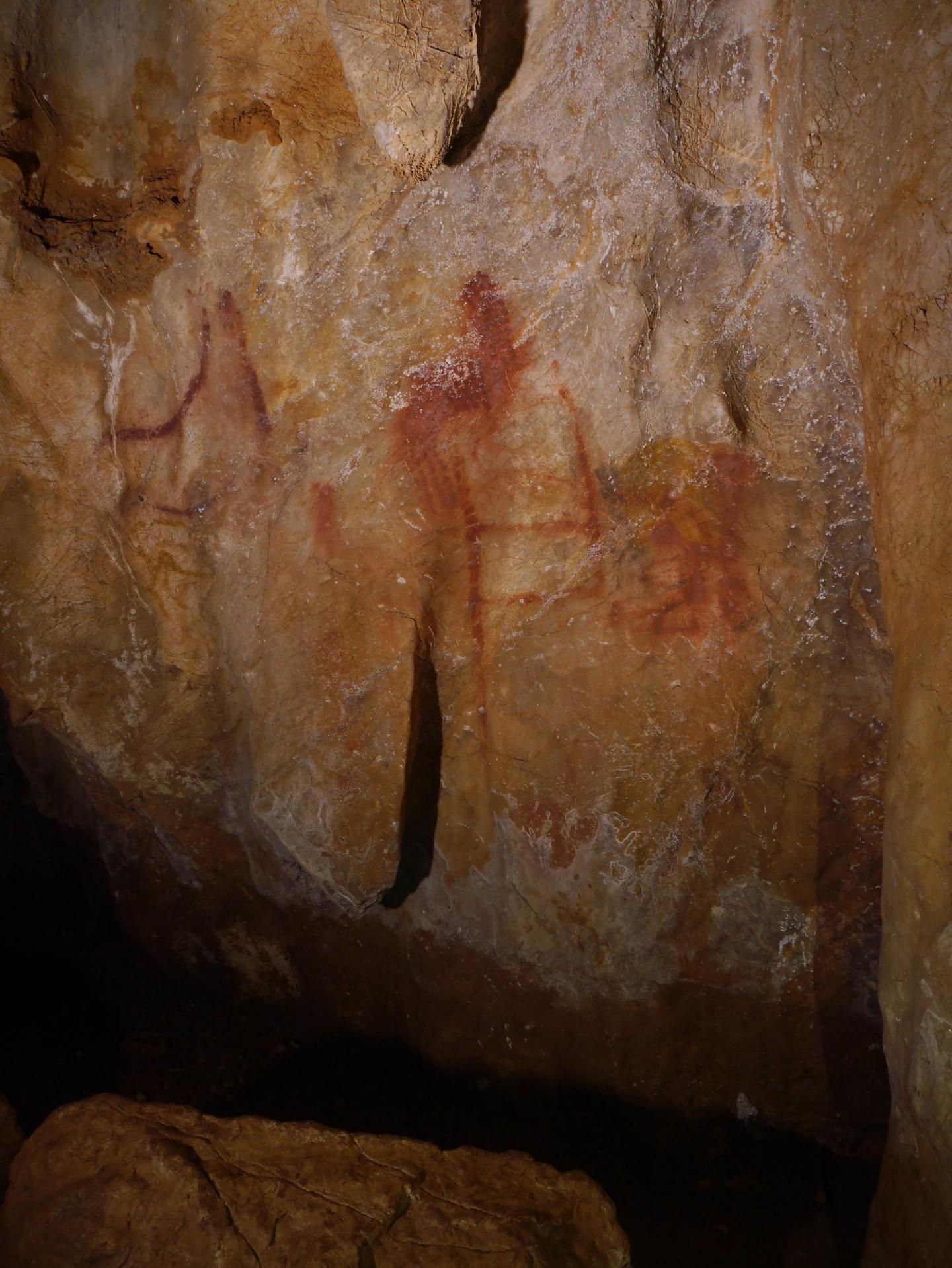 All three caves contain red (ochre) or black paintings of groups of animals, dots and geometric signs, as well as hand stencils, hand prints and engravings.

According to the researchers, creating the art must have involved such sophisticated behaviour as the choosing of a location, planning of light source and mixing of pigments.

Alistair Pike, Professor of Archaeological Sciences at the University of Southampton and co-director of the study, said: "Soon after the discovery of the first of their fossils in the 19th century, Neanderthals were portrayed as brutish and uncultured, incapable of art and symbolic behaviour, and some of these views persist today.

"The issue of just how human-like Neanderthals behaved is a hotly debated issue. Our findings will make a significant contribution to that debate."

Joint lead author Dirk Hoffmann, of the Max Planck Institute for Evolutionary Anthropology, added that symbolic material culture - a collection of cultural and intellectual achievements handed down from generation to generation - has, until now, only been attributed to our species.

"The emergence of symbolic material culture represents a fundamental threshold in the evolution of humankind. It is one of the main pillars of what makes us human," he said.

"Artefacts whose functional value lies not so much in their practical but rather in their symbolic use are proxies for fundamental aspects of human cognition as we know it."

Early symbolic artefacts, dating back 70,000 years, have been found in Africa but are associated with modern humans.

Drawing of Panel 78 in La Pasiega by Breuil et al (1913). The red scalariform (ladder) symbol has a minimum age of 64,000 years but it is unclear if the animals and other symbols were painted later. 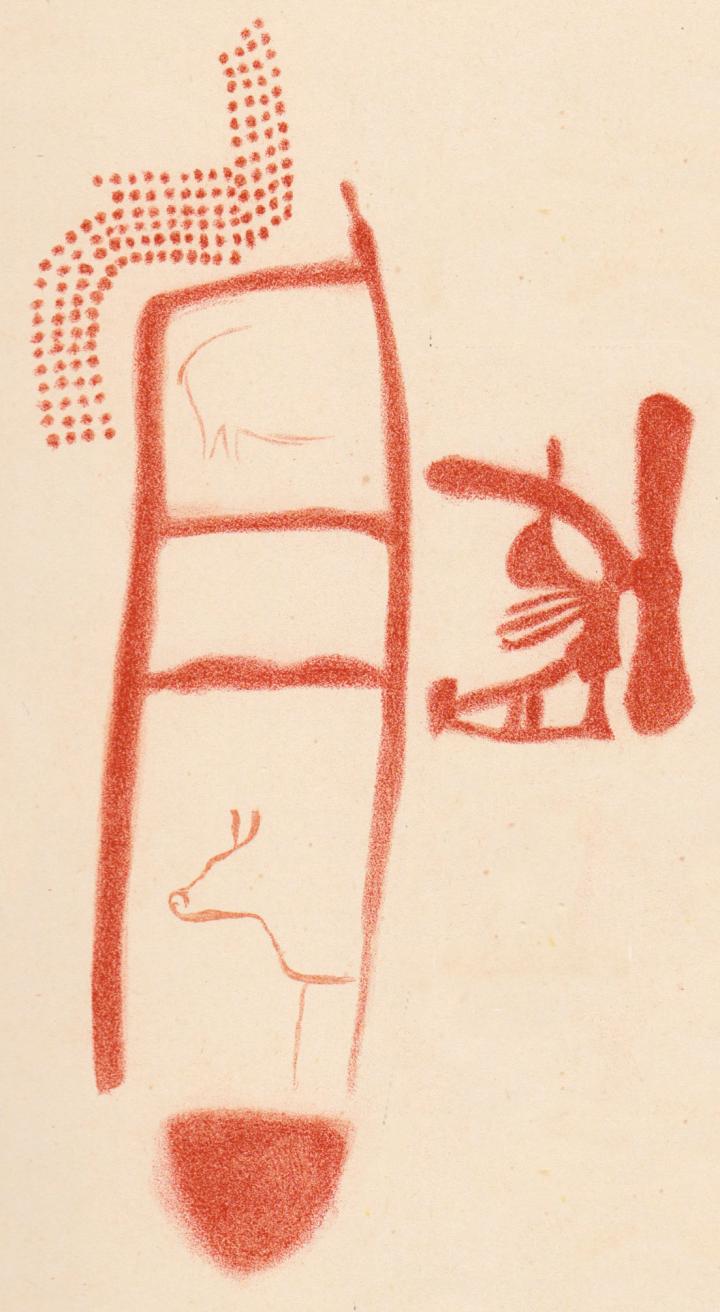 
Other artefacts including cave art, sculpted figures, decorated bone tools and jewellery have been found in Europe, dating back 40,000 years. But researchers have concluded that these artefacts must have been created by modern humans who were spreading across Europe after their arrival from Africa.

There is evidence that Neanderthals in Europe used body ornamentation around 40,000 to 45,000 years ago, but many researchers have suggested this was inspired by modern humans who at the time had just arrived in Europe.

"We have examples in three caves 700km apart, and evidence that it was a long-lived tradition. It is quite possible that similar cave art in other caves in Western Europe is of Neanderthal origin as well."

The research was supported by the Natural Environment Research Council, the National Geographic Society, the Max Planck Society, and a Royal Society Wolfson Research Merit Award.